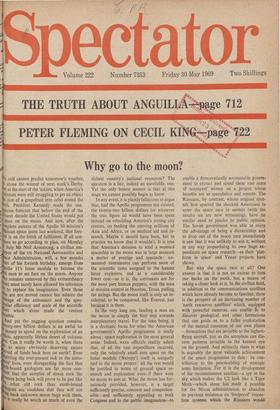 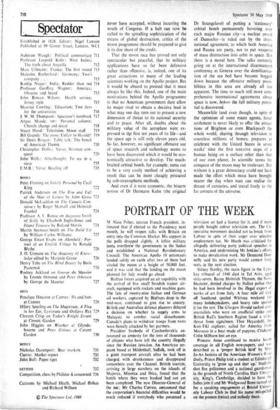 Why go to the moon?

e still cannot predict tomorrow's weather, 't alone the winner of next week's Derby. et at the start of the 'sixties, when America's ientists were still struggling to get an object e size of a grapefruit into orbit round the rth, President Kennedy made the out- geous forecast that before the end of the A man on the moon. And now, after the ,mplete success of the Apollo 10 mission's hitsun space jaunt last weekend, that fore- st is on the brink of fulfilment. If all con- Mes to go according to plan, on Monday a I July Mr Neil Armstrong, a civilian em- loYee of the us National Aeronautics and ace Administration, will, a few months ort of his fortieth birthday, emerge from Polo 11's lunar module to become the tst man to set foot on the moon. Anyone 110 remains unmoved by this extraordinary ent must surely have allowed his television 1 to replace his imagination. Even those 110 are not moved cannot but admire the orage of the astronauts and the spec- 411ar efficiency and scale of the scientific ort which alone made the venture ssible.

And yet the nagging question remains. twenty-two billion dollars is an awful lot Money to spend on the exploration of an Itless, apparently lifeless desert of volcanic st- Can it really be worth it, when there richest country's national resources? The question is a fair, indeed an inevitable, one. Yet the only honest answer is that at this stage we cannot possibly begin to know.

In any event, it is plainly fallacious to argue that, had the Apollo programme not existed, the twenty-two billion dollars (or whatever the true figure is) would have been spent instead on rebuilding America's rotting city centres, on feeding the starving millions of Asia and Africa, or on medical aid and re- search. Maybe it should have been, but in practice we know that it wouldn't. It is true , that America's decision to send a 'manned spaceship to the moon was in large measure a matter of prestige and spectacle : un- manned instruments can perform most of the scientific tasks assigned to the human lunar explorers, and at a considerably lower cost—as it is, the astronauts are for the most part human puppets, with the men at mission control in Houston, Texas, pulling the strings. But the moon itself is only an in- cidental, to be conquered, like Everest, just because it is there. enable a democratically accountable govern- ment to extract and spend these vast sums of taxpayers' money on a project whose benefits are so speculative and remote. The Russians, by contrast, whose original sput- nik first spurred the shocked Americans to enter the space race in earnest (with the results we are now witnessing), have no similar need to pander to public opinion. The Soviet government was able to enjoy the advantage of being a dictatorship and to drop out of the moon race immediately it saw that it was unlikely to win it, without in any way jeopardising its own huge oit- penditure on space research—as their 'plat- form in space' and Venus projects have shown. never have accepted, without incurring the wrath of Congress. If a halt can now be called to the spiralling sophistication of the means of global destruction, critics of the moon programme should be prepared to give it its due share of the credit.

That the moon race has proved not only spectacular but peaceful, that its military applications have so far been defensive rather than offensive, is, indeed, one of its great attractions to many of the leading scientists working on the Apollo project. But it would be absurd to pretend that it must always be like this. Indeed, one of the main motivations behind the Apollo programme is that no American government dare allow its major rival to obtain a decisive lead in what may one day turn out to present a new dimension of threat to its national security and to peace. After all, doubts about the military value of the aeroplane were ex- pressed in the first ten years of its life—and the space age is still only eleven years old. So far, however, no significant offensive use of Space research and technology seems to have been discovered which it would be eco- nomically attractive to develop. The much- bruited orbital bomb, for example, turns out to be a very costly method of achieving a result that can be more cheaply procured by sub-stratospheric methods.

And even, if it were economic, the bizarre notion of Dr Hermann Kahn (the original Dr Strangelove) of putting a 'stationary' orbital bomb .permanently hovering over each major Russian city—a nuclear sword of Damocles—is ruled out by the inter- national agreement, to which both America and Russia are party, not to put weapons of 'mass destruction into orbit in space. But there is a moral here. The talks currently going on at the international disarmament conference at Geneva over the demilitarisa- tion of the sea bed have become bogged down because the offensive military possi- bilities in this area are already all too apparent. The time to reach still more com- prehensive international agreements about space is now, before-the full military poten- tial is discovered.

Meanwhile (and even though, in spite of the optimism of some estate agents, lunar settlement is never likely to offer the attrac- tions of Brighton or even Blackpool) the whole world, sharing through television in countless millions of • homes, prepares to celebrate with the United States in seven weeks' time the first tentative steps of a human being on a. surface other than that of our own planet. In scientific terms the conquest of the moon may be irrelevant. But without it a great democracy could not have made the effort which must have brought nearer the day when man. can realise the dream. of centuries, and travel freely to the far corners of the universe.