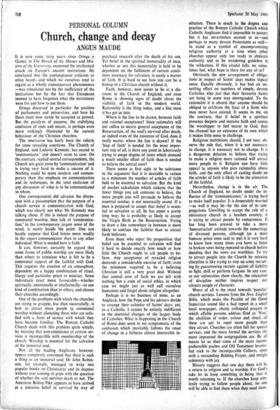 It is now some forty years since Ortega y Gasset, in The Revolt of the Masses and Mis- sion of the University, examined the intellectual attack on Europe's ancient institutions. He concluded that the contemptuous criticism so often heard—and which we ourselves tend to regard as a wholly contemporary phenomenon —was stimulated not by the inefficiency of the institutions but by the fact that Europeans seemed to have forgotten what the institutions were for and how to use them.

Ortega discussed in particular the position of parliaments and universities, and here his thesis must now surely be accepted as proved. But the paralysis of purpose, the stultifying confusion of ends and means, is perhaps even more strikingly illustrated by the current behaviour of the Christian churches.

The SPECTATOR has lately been the vehicle for some revealing assertions. The Church of England, said Ludovic Kennedy, has ceased to 'communicate,' and doesn't seem to care. On the contrary, replied several correspondents, the Church sets great store by 'communication' and is trying very hard to make a success of it. Nothing could be more modern and contem- porary than this emphasis on communication and its techniques, to the total exclusion of any discussion of what is to be communicated to whom.

One correspondent did advance the discus- sion with a presumption that the purpose of a church service is communication with God, which was clearly not what Mr Kennedy was talking about. If this is indeed the purpose of communal worship, then talk of 'communica- tion,' in the contemporary jargon sense of the word, is surely beside the point. One can hardly suppose that God listens more readily to the expert communicator than to any other individual. What is needed here is faith.

It can, however, certainly be argued that some forms of public worship are more likely than others to stimulate what is felt to be a communal rapport of the faithful with God. This requires the creation of an atmosphere, dependent on a happy combination of ritual, liturgy and particular priest or minister. Some individuals react more favourably—whether spiritually, emotionally or intellectually—to one kind of combination than to others, and choose their churches accordingly.

One of the problems with which the churches are trying to grapple, less than successfully, is how to attract more people to communal worship without alienating those who are satis- fied with a form of service with which they have become familiar. The Roman Catholic Church deals with this problem quite simply, by insisting that non-attendance at certain ser- vices is incompatible with membership of the church. Worship is essential for the salvation of the immortal soul.

Not all the leading Anglicans, however, appear completely convinced that there is such a thing as an immortal soul. Dr John Robin- son, for example, managed to wri.te two popular books on Christianity and its dogmas without ever coming to grips with the question of whether the soul survives death or not. The American Bishop Pike appears to have arrived at a tentative belief in survival by way of

psychical research after the death of his son. Yet belief in the spiritual immortality of man, whether or not this immortality is held to be dependent on the fulfilment of certain condi- tions necessary for salvation, is surely a matter of faith. It is hard to see how one can be a bishop in a Christian church without it.

Faith, however, now seems to be at a dis- count in the Church of England, and even Rome is showing signs of doubt about the viability of faith in the modern world. Rationality is the thing today, and a fine mess it has got us into.

Where is the line to be drawn, between faith and rational acceptance? Since rationality will not suffice to secure general acceptance of the Resurrection, of the soul's survival after death, or indeed even of the existence of God, does it really matter where the line is drawn? If the 'leap of faith' is needed for the most impor- tant step of all, is there any point in laboriously trying to purge dogma of items which demand a much smaller effort of faith than is needed to believe the central core?

There seems at first sight to be substance in the argument that it is desirable to reduce to a minimum the number of articles of faith held to be essential to salvation. But the kind of market calculation which reckons that the fewer things you ask someone to believe, the more people you will persuade to believe the essential residue, is not necessarily sound. If a man is prepared to accept that belief is essen- tial to salvation at all, he has come a pretty long way; he is probably as likely to accept the Virgin Birth as the Resurrection. Trying to draw a line somewhere in between is more likely to confuse the faithful than to attract fresh believers.

Even those who reject the proposition that belief can be essential to salvation will find it hard to decide exactly how much or how little the Church ought to ask people to be- lieve. Any acceptance of revealed religion demands a considerable exercise of faith; even the minimum required to be a believing Christian is still a very great deal. Without that central core of faith we are left with nothing but a code of social ethics, in which case we might just as well call ourselves humanists and forget about religion altogether.

Perhaps it is no business of mine, as an Anglican, how the Pope and his advisers decide to arrange their calendar of Saints' days; yet, as a Catholic, I cannot be entirely indifferent to the doctrinal changes of the largest body of Catholics. What is happening in the Church of Rome does seem to me symptomatic of the confusion which inevitably follows the onset of change in a hitherto almost immutable in-

stitution. There is much in the dogma and practice of the Roman Catholic Church which Catholic Anglicans find it impossible to accept; but it has nevertheless seemed to us—and perhaps to many devout Protestants as well— to stand as a symbol of uncompromising religious authority at a time when other churches appear only too ready to abdicate authority and to be wandering guideless in the wilderness. If this citadel falls, we some- times feel, what hope is there for any of us?

Obviously the new arrangement of obliga- tions in respect of Saints' days makes logical sense. Equally obviously, it has had an un- settling effect on numbers of simple, devout Catholics who feel that their favourite Saints are being in some way downgraded. To the rationalist it is absurd that anyone should be obliged to celcbrate the feast of a Saint who may never have existed. It seems to me, on the contrary, that if belief in a spiritual presence deepens and sustains faith and causes. the worshipper to feel nearer to God, then the channel has an existence of its own which it makes little sense to challenge.

Religious institntions should, I am sure, ob- serve the rule that, when it is not necessary to change, it is necessary not to change. It is a dangerous delusion to believe that trying to make a religion more rational will attract more people to it. Religion can have little appeal to anyone who puts rationality above faith, and the only effect of casting doubt on the articles of faith is likely to be the alienation of the faithful.

Nevertheless, change is in the air. The Church of England, no doubt under the in- fluence of the 'communicators,' is trying hard to make itself popular. It is desperately worried —as well it may be—by the size of its con- gregations. Unwilling to accept the role of a missionary church in a heathen country, it is trying to attract people by compromise. It has long been pressed to take a more 'humanitarian' attitude towards the remarriage of divorced persons, although (as a most humane priest once said to me) it is very hard to know how many times you have to listen to broken vows being repeated in church before deciding that the vows are worthless. To try to attract people into the Church by relaxing discipline is like trying to step up army recruit- ing by guaranteeing recruits against all liability to fight, drill or perform fatigues. In any case, as our universities show clearly, the relaxation of discipline neither inspires respect nor attracts people of character.

Worst of all is the trend towards 'popular' church services. Lessons from the New English Bible, which make the Parable of the Good Samaritan sound like a bad report in a small local newspaper, chatty colloquial prayers in which affable parsons address God as 'You,' the abolition of order, colour and ritual, all these are apt to repel more people than they attract. Churches are often full for special services, and the more formal the services the more impressed the congregations are. By all means let us shed some of the more incom- prehensible psalms and Old Testament lessons: but stick to the incomparable Collects, open with a resounding Bidding Prayer, and mingle solemnity with joy. History suggests that one day there will be a return to religion and to worship. For God's sake let us keep something in being that is worth returning to. If the churches keep aim- lessly trying to follow people about, no one will be able to find them when they need them.