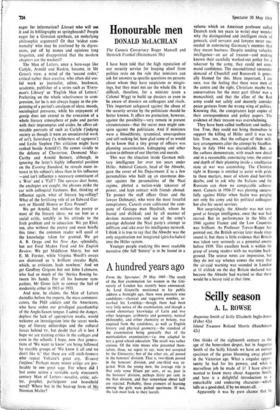 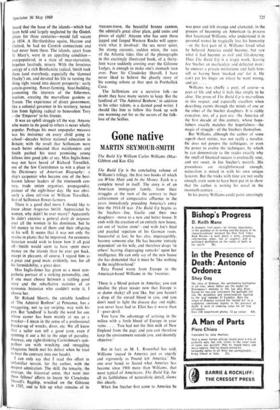 Island Treasure Roland Morris (Hutchinson 42s) One thinks of the eighteenth century as the age of the benevolent despot, but in Augustus Smith of the Scilly Islands we have an outsize specimen of the genus blooming away plumb in the Victorian age. What a singular oppor- tunity he had for his powers, and what a marvellous job be made of it! I have always wanted to know more about Augustus Smith, and here is a delightful introduction to a remarkable and endearing character--which tells us a good deal, if by no means all.

Apparently it was by pure chance that he heard that the lease of the islands—which bad been held and largely neglected by the Cledol- phins for three centuries—would fall vacant in 1834. A Hertfordshire squire, Harrow and Oxford, he had no Cornish connections and

had never been there. The islands, apart from St Mary's, were in an appalling condition— overpopulated, in a state of near-starvation, hopeless lassitude, misery. With the ferocious energy of a rich Benthamite radical, Smith took them (and everybody, especially the 'damned Duchy') on, and devoted his life to turning the thing right round into decent prosperity: early potato-growing, flower-farming, boat-building, promoting the interests of the fishermen, tourism, creating the marvellous gardens at Tresco. The experience of direct government, like a colonial governor in his territory, turned him from fighting radical to benevolent Tory —the 'Emperor' to his friends.

It was an uphill struggle all the way. Anyone who wants to do good to others is never wholly popular. Perhaps his most unpopular measure was his insistence on every child going to school—decades before national education in Britain; with the result that ScilIonians were much better educated than mainlanders •and Smith pushed his most promising young fellows into good jobs at sea. Miss Inglisllones may. not have heard of Richard Trevellick, one of the few Cornishmen to win a place in the Dictionary of American Biography: a ship's carpenter who became one of the best- known labour leaders of the nineteenth cen- tury, trade union organiser, propagandist, pioneer of the eight-hour day. He was obvi- ously a close rely tion of William Trevellick, first of Scillonian flower-farmers.

There is a good deal more I should like to know about Augustus Smith. Appreciated by women, why didn't he ever marry? Apparently he didn't exercise a general droit de seigneur over all the women in his dominion, but he left money to two of them and their offspring in his will. It seems that it was not only the strains in plants that he improved. An economic historian would wish to know how it all paid off—Smith would seem to have spent more money on the islands than he ever got back, except in pleasure, of course. I regard him as a great and good man; evidently, too, for all his formidability, a great dear.

Miss Inglis-Jones has given us a most sym- pathetic portrait of a striking personality, and, if one must choose between a rattling good story and the rebarbative statistics of an economic -historian who couldn't write it, I choose her.

Mr Roland Morris, the amiable landlord of 'The Admiral Benbow' at Penzance, has a swaggering, not to say swiping, way with his pen. But 'landlord' is hardly the word for one whose career has been mainly at sea as a wrecker—I mean in the sense of a professional breaker-up of wrecks, diver, etc. We all know that a sailor can tell a good yarn, even if spinning it out a bit to the edge of garrulity. Anyway, any right-thinking Cornishman's sym- pathies are with wrecking and smuggling (Augustus Smith met his defeat when he tried to beat the contrary into our heads). I can only say that I read this effort in unfamiliar terrain, for the author, with the deepest admiration. The skill, the tenacity, the courage, the historical sense, that went into these fellows' efforts to locate Sir Cloudesley Sbovell's flagship, wrecked on the Gilstone in 1707, and to fish up what remains of its treasure-trove, the beautiful bronze cannon, the admiral's great silver plate, gold coins and pieces of eight! Anyone who has seen those jagged and fanged Western Rocks will appre- ciate what it involved: the sea never quiet, the strong currents, sudden mists, the race of the Atlantic tides. One of the photographs in this excitingly illustrated book, of a thirty- foot wave suddenly cresting over the Gilstone Ledges, is enough to make one's stomach turn over. Poor Sir Cloudesley Shovell, I have never liked to believe the ghastly story of his coming ashore at that spot in Porthellick Cove.

The Scillonians are a secretive folk—no doubt they have many secrets to keep. But the landlord of 'The Admiral Benbow,' in addition to his other talents, is a darned good writer. I should like him to follow this book up with one worming out for us the secrets of the folk- lore of the Scillies.