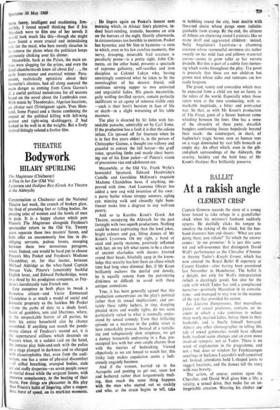 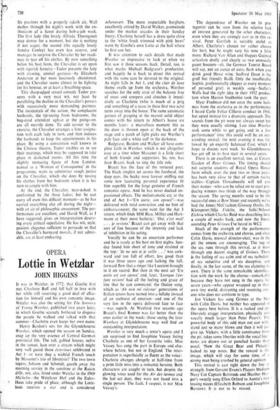 At a rakish angle

Captain Gronow records the story of a young lover forced to take refuge in a grandfather clock when his mistress's husband suddenly returns. He dutifully clicks his tongue to simulate the ticking of the clock, but the hus- band discovers him and shouts: 'What are you doing there, you villain?' To which the answer comes: Ve me promene.' It is just this same wit and self-assurance that distinguish David Wall's performance as the Chevalier d'Amour in Antony Tudor's Knight Errant, which has now entered the Royal -Ballet II repertory at Covent Garden—after having been premiered last November in Manchester. The ballet is a delight, not only for Wall's interpretation (which is dazzlingly good), but also for the style with which Tudor has told a complicated narrative—positively Massinian in its convolu- tions —and managed to stay true to the manner of the text that provided his action.

Les Liaisons Dan gereuses, that marvellous picture of sexual predators, contains an in- cident in which a rake contrives to seduce three newly married ladies, betray them to their husbands, and is finally himself betrayed. Almost any other choreographer in telling this tale of sexual gymnastics would have offered both involved scene changes and an even more involved synopsis; not so Tudor. There is no word of explanation in the programme, and not a bed, door or window for Feydeauesque scuttlings in Stefanos Lazaridis's well-conceived set. Instead, attendants hold L-shaped joists to suggest locations, and the dances tell the story with nice brevity.

The action, of course, centres upon the Chevalier, and David Wall gives him a life, a vitality, a sexual drive, that make for an un- forgettable creation. Wearing his clothes ani0

his passions with a properly rakish air, Wall dashes through his night's work with the en- thusiasm of a Scout during bob-a-job week. The first lady (the lovely Alfreda Thorogood) may demur for a moment, but she is nothing if not eager; the second (the equally lovely Sandra Conley) has even less reserve, and manages to surprise the Chevalier by her readi- ness to tear off his clothes. By now something below his best form, the Chevalier is set upon with tigerish ferocity—Tudor presents the lady with clawing, animal gestures—by Elizabeth Anderton at her most lusciously abandoned, and the Chevalier seems almost to be fighting for his honour, or at least a breathing-space.

This sharp-edged sexual comedy Tudor pre- sents with a very neat wit, not least by paralleling the decline in the Chevalier's powers with successively more demanding partners. The incidentals of the action, the complacent husbands, the tip-toeing from bedrooms, the bug-eyed attendant aghast at the goings-on, are all merrily done. To add savour to the exercise, the Chevalier arranges a later assigna- tion with each lady in turn, and then induces the husbands to keep the appointments in his place. By using a convention well known in the Chinese theatre, Tudor enables us to see their meetings, which may be supposed to take place in darkened rooms. All this time the slightly menacing figure of Jane Landon, named as a 'Woman of Consequence' in the programme, waits to administer rough justice on the Chevalier, which she does by tossing his clothes from her bedroom when it is her turn to couple with him.

At the end, the Chevalier, near-naked, is confronted by the three ladies; but he can carry off even this difficult moment—as he has carried everything else off during the night— with an air of philosophic amusement. The per- formances are excellent, and David Wall, as I have suggested, gives an interpretation deserv- ing every critical superlative. He has wit, style, passion, elegance sufficient to persuade us that the Chevalier's barnyard morals, if not admir- able, are at least endearing.