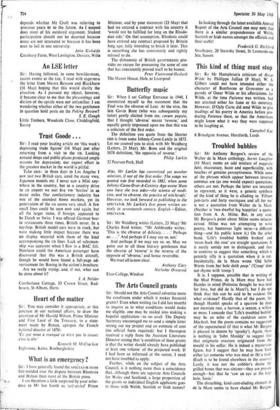 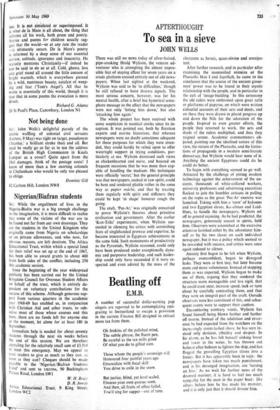 Sir: Mr Anthony Burgess's review of the Walter de la Mare anthology, Secret Laughter (16 May), seems an odd mixture of suggestio falsi, inaccuracy, haste and superficiality, with touches of genuine perceptiveness. While some of the phrases which appear between inverted commas are (as one would expect) quotations, others are not. Perhaps the latter are intended to represent, as it were, a generic synthesis of the kind of thing he is alluding to. 'Fifteen jam-tarts and forty meringues and all for me' is not a quotation from Walter de la Mare. (Neither is 'two dwefful big hoppities' a quota- tion from A. A. Milne. But, in any case, Mr Burgess's point about Milne seems miscon- ceived. Milne was not attempting to write poetry, but humorous light verse—a different thing—and his public knew it.) On the other hand, 'Life's troubled bubble broken' and 'roves back the rose' are straight quotations. It is surely untidy not to distinguish, and thus to contrive to suggest that something which is patently silly is a quotation when it is not. Incidentally, de la Mare wrote 'Old Sallie Worm from her hole doth peep.' ('Creep' does not rhyme with `creep.) It is, I suppose, possible that in writing of the Mad Prince, de la Mare may have had Hamlet in mind (Polonius thought he was mad for love, but did de la Mare?), but I do not think that this can be said to be evident. On what evidence? Hardly that of the poem, for though Hamlet speaks of a sparrow he does not mention rust, a harrow, a sexton, a willow or moss. I concede that 'Life's troubled bubble' may be an echo of the cauldron scene in Macbeth, but the poem contains no suggestion of the supernatural (if that is what Mr Burgess is pleased to denote by 'spooky). Again, there is nothing in 'John Mouldy' to suggest that that enigmatic creature originated from the mould in his cellar. He is indeed a mysterious figure, but I suggest that be may have been either (a) someone who was mad or (b) a toad. (Each is to be found elsewhere in the oeuvre.) Lastly, it was not the cobbler's desire for grilled bones that was sinister—they are prosaic enough—but that be 'saw an eye at the key- hole, Susie.' The disturbing, kind-aunt-eluding element in de la Mare seems to have eluded Mr Burgess

taa. It is not simulated or superimposed. It is what de la Mare is all about, the thing that informs all his work, both prose and poetry. Stories and poems for children usually sug- gest that the world—or at any rate the reader —is ultimately secure. De la Mare's poetry is informed by a deep sense of our essential sorrow, solitude, ignorance and insecurity. He scarcely mentions Christianity—if indeed he can be said to do so at all. Cold, ghosts, loss and grief stand all around the little cocoon of bright warmth, which is everywhere pierced by a wild, numinous beauty, catalyst of weep- ing and fear (`Tom's Angel'). All that he wrote is essentially of this work!, though it is true that in some poems the evocation is more direct.