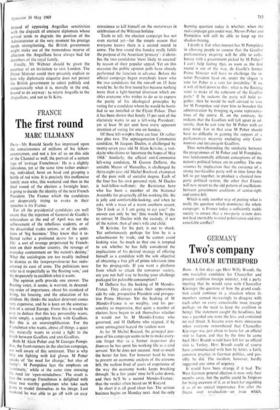 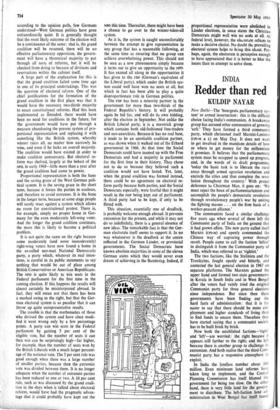 Bonn--A few days ago Herr Willy Brandt, the SPD (socialist) candidate for Chancellor and present coalition foreign minister, told a party meeting that he would raise with Chancellor Kiesinger the question of how the grand coali- tion could continue in a situation where its members seemed increasingly to disagree with each other on every conceivable issue (except perhaps on the need to keep the coalition in being). The statement caught the headlines, but was a guarded one none the less, and contained no real threat. It became even more innocuous when everyone remembered that Chancellor Kiesinger was just about to leave for an official visit to Japan, and that by the time he came back Herr Brandt would have left for an official visit to Turkey. Herr Brandt could of course have communicated with him by letter, a fairly common practice in German politics, and pos- sibly he did. The incident, however, hardly suggested any sense of urgency.

It would have been strange if it had. The West German general election is now only four months away, but the public could be forgiven for being unaware of it, or at least for regarding it as of no special importance. For after the fracas over revaluation—an issue which, according to the opinion polls, few Germans understood—West German politics have gone

extraordinarily quiet. It is generally thought

that the most likely outcome of the election will be a continuance of the same: that is, the grand coalition will be resumed, there will be no effective parliamentary opposition, the govern- ment will have a theoretical majority to put through all sorts of reforms, but it will be checked from doing so because of divisions and reservations within the cabinet itself.

A large part of the explanation for this is that the grand coalition failed some time ago in one of its principal undertakings. This was the question of electoral reform. One of the chief justifications for the formation of the grand coalition in the first place was that it would have the necessary two-thirds majority to enact constitutional reforms. Had this been implemented as intended, there would have been no need for coalitions in the future, for the government would have put through a measure abandoning the present system of pro- portional representation and replacing it with something like the British system, whereby winner takes all, no matter how narrowly he wins, and even if be lacks an overall majority. The coalition would have existed in order to

make coalition unnecessary. But electoral re- form was shelved, largely at the behest of the SPD, in early 1968—little more than a year after the grand coalition had come to power.

Proportional representation is both the bane and the saving grace of the West German poli- tical system. It is the saving grace in the short term, because it forces the parties to coalesce, and therefore to avoid extremes. It is the bane in the longer term, because at some stage people will surely react against a system which allows no room for constitutional protest. There is, for example, simply no proper home in Ger- many for the even moderately left-wing voter. And the longer the grand coalition continues, the more this is likely to become a political problem.

It is not quite the same on the right because some moderately (and some immoderately) right-wing voters have now found a home in the so-called neo-nazi National Democratic party, a party which, whatever its real inten- tions, is careful in its public statements to say nothing that would be out of place among British Conservatives or American Republicans.

The NPD is quite likely to win seats in the

Federal parliament for the first time in the coming election. If this happens the results will almost certainly be misinterpreted abroad. In fact, they will mean not that there has been a marked swing to the right, but that the Ger- man electoral system is so peculiar that it can throw up quite unrepresentative results.

The trouble is that the mathematics of those who devised the system and have since modi- fied it went wrong only by a few percentage points. A party can win seats in the Federal parliament by gaining 5 per cent of the eligible vote, but the number of seats it can then win can be surprisingly high—far higher, for example, than the number of seats won by the British Liberals with a much larger percent- age of the national vote. The 5 per cent rule was good enough when there was a large number of smaller parties, because then the extremist vote was divided between them. It is no longer adequate when the number of extremist parties has been reduced to one or two. A 10 per cent rule, such as was discussed by the grand coali- tion in the days when it talked about electoral reform, would have had the pragmatic advan- tage that it could probably have kept out the NPD this time. Thereafter, there might have been a chance to go over to the winner-takes-all system.

As it is, the system is caught uncomfortably between the attempt to give representation to any group that has a reasonable following, at the same time as ensuring that no group can achieve overwhelming power. This should not be seen as a new phenomenon simply because it turns out to give an opportunity to the Npn. It has existed all along in the opportunities it has given to the FOP (German's equivalent of the Liberal party), which under the British sys- tem could well have won no seats at all, but which in fact has been able to play a quite disproportionate role in German politics.

The FDP has been a minority partner in the government for more than two-thirds of the Federal Republic's history. It will probably again be bid for, and will do its own bidding, after the election in September. Not unlike the British Liberal party, it is a maverick group which contains both old-fashioned free-traders and neo-anarchists. Because it has no real base, it tends to be an unreliable coalition partner, as was shown when it walked out of the Erhard government in 1966. At that time the Social Democrats could have teamed up with the Free Democrats and had a majority in parliament for the first time in their history. They chose not to do so because they believed such a coalition would not have lasted. Yet, later, when the grand coalition was formed instead, there could be no agreement on electoral re- form partly because both parties, and the Social Democrats especially, were fearful that it might result in the FOP being kept out of parliament. A third party had to be kept, if only to be flirted with.

This situation, essentially one of deadlock, is probably welcome enough abroad. It prevents extremism for the present, and while it may not do so indefinitely, there is a general absence of new ideas. The remarkable fact is that the Ger- man electorate itself seems to support it. In no way whatsoever is the deadlock at the centre reflected in the German Lander, or provincial governments. The Social Democrats have known absolute majorities in some of the eleven German states which they would never even dream of achieving in the Bundestag. Indeed, if

proportional representation were abolished in Lander elections, in sonic states the Christian Democrats might well win no seats at all. At federal level, however, the ele‘torate refuses to make a decisive choice. No doubt the prevailing electoral system helps to bring this about. Per- haps, again, the electorate is perceptive enough to have appreciated that it is better to blur the issues than to attempt to solve them.