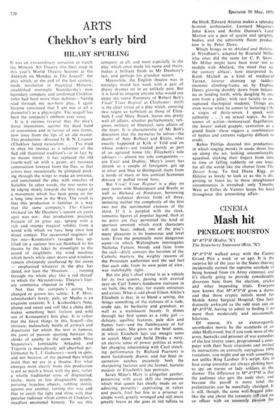 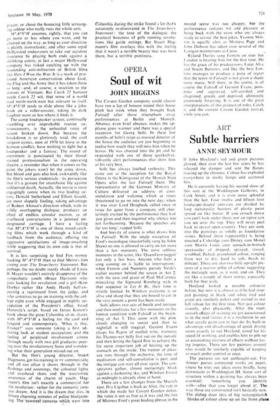 M*A*S*H (Rialto, 'X') The Strawberry Statement (Ritz, 'X') M*A*S*H walked away with the Cannes Grand Prix a week or so ago. It is the surprise hit of the year in the States (having incidentally earned the supreme accolade of being banned from us Army cinemas), and it's clearly going to provide considerable diversion here from the election, cricket and other impending trials. Everyone now knows that M*A*S*H gives a damn. and that those cryptic initials stand for Mobile Army Surgical Hospital. One feels distinctly awkward as the odd man out on M*A*S*H, having to admit to finding it no more than moderately and occasionally hilarious.

Of course, it's an extravagantly unorthodox movie by the standards of an older Hollywood; but if you took most of the army, barracks and prisoner of war comedies of the last twenty years, programmed a com- puter with their basic situations and invited its instructions on correctly outrageous 1970 variations, you might end up with something not unlike Ring Lardner Jr's script. GIs in base camp comedies are always plotting how to spy on nurses or lady soldiers in the shower. The difference in M* A*S*H is that the audience also gets the nude shot; and because the payoff is more total the preliminaries can be mercifully abridged. It is still, though, the same well-flogged joke. like the one,about the torments infEcted on an officer w,kth an unseemly passion for

prayer, or about the bouncing little scroung- ing soldier who really runs the whole unit.

M*A*S*H assumes, rightly, that you can eir, more or less where you want, and be cheered on the way, as long as your direction is plainly iconoclastic; and after some tepid Hollywood endeavours to take out accident insurance by playing both ends against a shrinking centre, at last a major Hollywood company has risked catching up with the resounding anti-militarism of British films like How I Won the War. It is a mark of pro- found American conservatism about God, the Flag and the Army that it has taken them so long—and, of course, a reaction to the stresses of Vietnam. But Catch 22 humour needs Catch 22 wit, that sense of a world mad north-north-west but relevant to itself. M*A*S*H tends to slide about like a joke- book on a roller-coaster, taking its dark laughter more or less where it finds it.

The camp loudspeaker system, continually stumbling over improbable routine an- nouncements, is the unheeded voice of reason broken down. But because the breakdown is so gloriously total, the cool surgeon cynics, men of 1970 let loose in the Korean conflict, have nothing to fight but a loudspeaker and a fantasy. The round of merriment is punctuated by their blood- stained professionalism in the operating theatre, a reminder that when it comes to the point the jokers won't let the army down. But blood and guts also look awkwardly like the film's serious credentials—its persuasion that it's a gesture for anarchistic life against militarised death. Actually, the movie is most engagingly comic when its two leading ac- tors, Donald Sutherland and Elliott Gould, are most sloppily fooling, taking advantage of Robert Altman's direction which, with its wildly overlapping dialogue, produces an effect of endless- circular motion, as of overheard conversations in a jammed un- derground carriage. I have a feeling that M*A*S*H is one of those mood-catch- ing films which work through a kind of feedback from the audience, offering the aggressive satisfactions of image-smashing while suggesting that its own side is that of survival.

It is less surprising to find Fox money backing M*A*S*H than to find Metro's lion cooing over The Strawberry Statement. But perhaps the no doubt sturdy shade of Louis B. Mayer wouldn't entirely disapprove of the sympathetic youth (Bruce Davison) who goes looking for revolution and a girl (Kim Darby) rather like Andy Hardy half-ex- pecting a reprimand from the judge, and who contrives to go on training with the col- lege eight even while engaged in nightly oc- cupation of the President's office. Israel Horovitz's script, based on James Kunen's book about the great Columbia sit-in, shares with M*A*S*H a feeling for the cool and languid and contemporary. 'What is this, France?' says someone taking a first ad- miring look at student occupation; and the feeling of perplexed involvement comes through neatly with two girl graduates peer- ing over the revolutionary fence and wonder- ing what their generation missed out on.

But the film's young director, Stuart Hagmann, got his training in -ry commercials; and all too often it shows through in the fleshings and zoomings, the coloured lights and overhead shots and the narcissistic awareness of the charm of youth. Hag- mann's film isn't exactly a commercial for the revolution: rather for the romantic cam- pus dream. And it is the dream that dies, in fifteen churning minutes of police bludgeon- ing. The newsreel-cameras whith went into Columbia during the strike found a lot that's accurately re-discovered in The Strawberry Statement: the tone of the dialogue, the practical bossiness of girls running revolu- tions like guide outings. But Stuart Hag- mann's film overlays this with the feeling that it wasn't a terrible beauty that was born there, but a terrible prettiness.