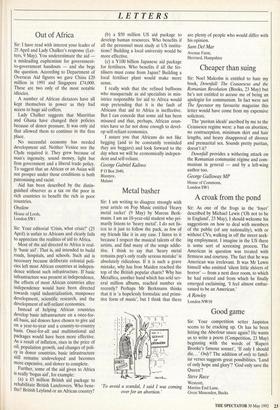 Sir: I am writing to disagree strongly with your article on Pop Music entitled 'Heavy metal racket' (9 May) by Marcus Berk- mann. I am an 18-year-old student who pri- marily listens to 'heavy metal'. I do not lis- ten to it just to follow the pack, as few of my friends like it in any case. I listen to it because I respect the musical talents of the artists, and find many of the songs addic- tive. I think to say that 'heavy metal remains pop's only really serious mistake' is absolutely ridiculous. If it is such a grave mistake, why has Iron Maiden reached the top of the British popular charts? Why has Metallica, another band which has sold sev- eral million albums, reached number six recently? Perhaps Mr Berkmann thinks that it is 'a hopelessly formulaic and primi- tive form of music', but I think that there 'To avoid a scandal, I said I was coming over for an abortion.' are plenty of people who would differ with his opinion.