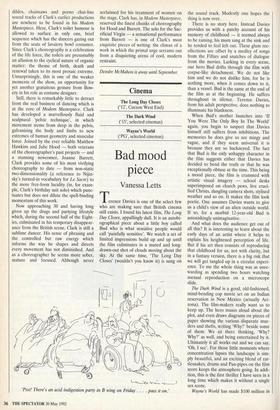 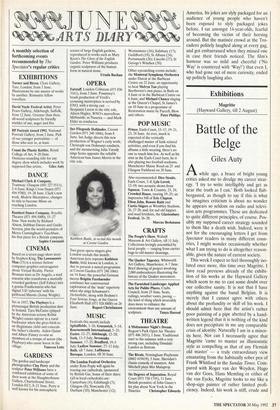 Terence Davies is one of the select few who are making sure that British cinema still exists. I found his latest film, The Long Day Closes, appallingly dull. It is an autobi- ographical piece about a little boy called Bud who is what sensitive people would call 'painfully sensitive'. We watch a set of limited impressions build up and up until the film culminates in a muted and long- drawn-out shot of clouds moving about the sky. At the same time, 'The Long Day Closes' (wouldn't you know it) is sung on l'sst! There's an acid indigestion party in B wing on Friday . . . . pass it on.'

the sound track. Modestly one hopes the thing is now over.

There is no story here. Instead Davies provides us with a patchy account of his memory of childhood — it seemed always to be raining, his mum sang at the sink and he tended to feel left out. These glum rec- ollections are offset by a medley of songs from the Fifties and snatches of dialogue from the movies. Lurking in every scene, our hero Bud drifts through the film with corpse-like detachment. We do not like him and we do not dislike him, for he is nothing more, when it comes down to it, than a vessel. Bud is the same at the end of the film as at the beginning. He suffers throughout in silence. Terence Davies, from his adult perspective, does nothing to illuminate his blankness.

When Bud's mother launches into `If You Were The Only Boy In The World' again, you begin to suspect that Davies himself still suffers from inhibitions. The memories he does give us are mingy and vague, and if they seem universal it is because they are so hackneyed. The fact that Bud is the only unhappy character in the film suggests either that Davies has decided to bend the truth or that he was exceptionally obtuse at the time. This being a mood piece, the film is crammed with artistic visual imagery — school desks superimposed on church pews, live cruci- fied Christs, dangling camera shots, stylised weather and so on. It makes the film look poetic. One assumes Davies wants to give us a child's view of an alien outside world. If so, for a morbid 12-year-old Bud is astonishingly unimaginative.

And what does the audience get out of all this? It is interesting to learn about the early days of an artist where it helps to explain his heightened perception of life. But if his art then consists of reproducing that childhood for us, not with clarity, but in a fantasy version, there is a big risk that we will get tangled up in a circular experi- ence. To me the whole thing was as unre- warding as spending two hours watching asexual reproduction on a microscope slide.

The Dark Wind is a good, old-fashioned, mind-bending cop movie set on an Indian

reservation in New Mexico (actually Ari- zona). The film-makers really want us to keep up. The hero muses aloud about the plot, and even draws diagrams on pieces of paper showing the various disparate mur- ders and thefts, writing 'Why?' beside some of them. We sit there thinking, 'Why? Why?' as well, and being entertained by it.

Ultimately it al! works out and we can say, `Oh, I see'. For those little moments where concentration lapses the landscape is sim- ply beautiful, and an exciting blend of rat- tlesnakes, drums and Pan-pipes on the film score keeps the atmosphere going. In addi- tion, this is the first thriller I have seen in a long time which makes it without a single sex scene.

Wayne's World has made $100 million in America. Its jokes are slyly packaged for an audience of young people who haven't been exposed to slyly packaged jokes before. I sat amongst 14-year-olds, fearful of becoming the victim of their horsing around. But the matinee crowd at the Tro- cadero politely laughed along at every gag, and got embarrassed when they missed one in case their friends noticed. The film's humour was so mild and cheerful ('No Way' is countered with Way!') that even I, who had gone out of mere curiosity, ended up politely laughing also.