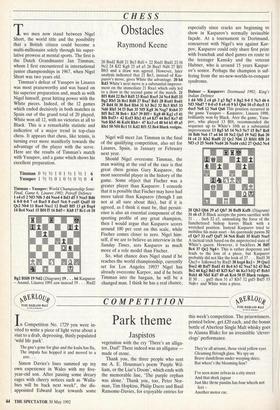 Two men now stand between Nigel Short, the world title and the possibility that a British citizen could become a multi-millionaire solely through his super- lative prowess at mental sports. The first is the Dutch Grandmaster Jan Timman, whom I first encountered in international junior championships in 1967, when Nigel Short was two years old.

Timman's defeat of Yusupov in Linares was most praiseworthy and was based on his superior preparation and, much as with Nigel himself, great hitting power with the White pieces. Indeed, of the 12 games which ended decisively in both matches in Spain out of the grand total of 20 played, White won all 12, with no victories at all to Black. This is a remarkable statistic and indicative of a major trend in top-class chess. It appears that chess, like tennis, is turning ever more manifestly towards the advantage of the player with the serve. Here are the results of Timman's match with Yusupov, and a game which shows his excellent preparation.

Nigel will meet Jan Timman in the final of the qualifying competition, also set for Linares, Spain, in January or February next year.

Should Nigel overcome Timman, the man waiting at the end of the race is that great chess genius Gary Kasparov, the most successful player in the history of the game. Some object that Fischer was a greater player than Kasparov. I concede that it is possible that Fischer may have had more talent than Kasparov (though I am not at all sure about this), but if it is agreed, as I think it must be, that persist- ence is also an essential component of the sporting profile of any great champion, then I would argue that Kasparov scores around 100 per cent on this scale, while Fischer comes closer to zero. Nigel him- self, if we are to believe an interview in the Sunday Times, sees Kasparov as much more of a role model than Fischer.

So, what chance does Nigel stand if he reaches the world championship, currently set for Los Angeles 1993? Nigel has already overcome Karpov, and if he beats Timman into the bargain, he will be a changed man. I think he has a real chance, especially since cracks are beginning to show in Kasparov's normally invincible façade. At a tournament in Dortmund, concurrent with Nigel's win against Kar- pov, Kasparov could only share first prize with Ivanchuk and shed games en route to the teenager Kamsky and the veteran Hubner, who is around 15 years Kaspar- ov's senior. Perhaps the champion is suf- fering from the no-new-worlds-to-conquer syndrome.