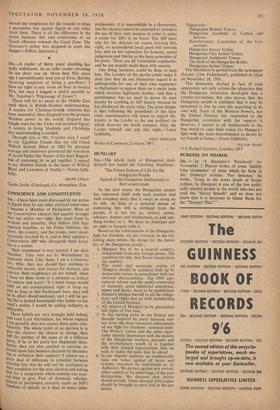 SIR,—The whole body of Hungarian intel- lectuals has issued the

'The Future Pattern of Life for the Hungarian People Appeal of the Hungarian intellectuals to their countrymen 'In the past weeks the Hungarian people has expressed itself with such passion and such complete unity that it swept us along on its tide. As long as a peaceful means of expressing this will is withheld from the people, it is not for us, writers, artists, scholars, doctors and intellectuals, to add any- thing further to it. We haye no intention and no right to bargain with it.

'Based on the achievements of the Hungarian tight for freedom, we put forward, in the fol- lowing main points, the design for the future life of the Hungarian people : 1. Hpngary has to be a neutral country, independent from any foreign power. The condition for this, that Soviet troops leave the country.

2. The social and economic system of Hungary .should be socialism built up by democratic means in accordance with our national characteristics. The 1945 agri- cultural reform and the public ownership of factories, great industrial enterprises. mines and banks, have to be maintained.

3. Hungary pledges herself to all the obliga- tions and rights that go with membership of the United Nations.

4. All citizens of Hungary to be guaranteed full rights of free men.

5. At this turning point in our hiStory any thought inspired by party interests can- not serve the most treasured achievement of our fight for freedom : national unity. The Writers' Union and the other signa- tories identify themselves with the destiny of the Hungarian workers, peasants and the revolutionary youth. It is together with their elected' organisations that we wish to tackle the tasks that lie ahead.

6. In our singular position, we emphatically raise our voices against all terror and tyranny exercised by individuals or by Authority. We protest against any revival, either openly or by subterfuge, of the past dictatorship. We demand that justice should prevail. Those charged with crimes should be brought to open trial in the law courts.

Hungarian Academy of Letters and Science.

Revolutionary Committee of the Uni- versities.

The Staff of the Hungarian Radio.

This Manifesto is quoted from the newspaper Hazdnk cOur Fatherland'), published in Gyor on November 18, 1956.

This document, drafted in face of total oppression, not only refutes the allegation that the Hungarian revolution developed into a counter-revolution, but also proves that the Hungarian people is confident that it may be permitted to live its own life according to its own will. None of the Western Powers, nor the United Nations, has responded to the Hungarian revolution with the support it deserves. I appeal to all intellectuals in the free world to raise their voices for Hungary's fight with the same determination as shown by my friends at home.—Yours faithfully,