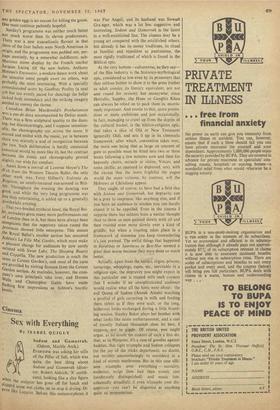 By ISABEL QUIGLY was Pier Angeli, and its husband was Stewart Gra nger, which was a lot less suggestive and interesting. Sodom and Gomorrah is the latest in a well-established line. The cinema may be a young art compared with the established others, but already it has its mossy traditions, its ritual as familiar and repetitive as pantomime, the most rigidly traditional of which is found in the Biblical epic.

At the very bottom—culturewise, as they say— of the film industry is the historico-mythological epic, considered so low even by its promoters that they seldom bother to show it to the press (rather as adult comics, its literary equivalent, are not sent round for review); but moneywise, since Hercules, Sappho, the Huns or Genghis Khan can always be relied on to pack them in, enorm- ously important. And cousin to that, more preten- tious or more ambitious and just occasionally, in fact, managing to crawl up from the depths of the cultural bucket, is the biblico-religious epic, that takes a slice of Old or New Testament (generally Old), and sets it up in its cinematic framework; after which, convention takes over, the main one being that as large an amount of gore as possible must be fitted into two or three hours (allowing a few minutes now and then for heavenly choirs, miracle or vision, Voices, and some idyllic, as opposed to depraved, sex), with the excuse that the more frightful the pagan world the more virtuous, by contrast, will the Hebrews or Christians appear.

They ought, of course, to have had a field day with Sodom and Gomorrah, but depravity can be a prey to ineptness, like anything else, and if you have an audience in stitches you can hardly expect it to be appalled. Even in the cinema I suppose there has seldom been a nastier thought than to show us men painted slowly with oil and then roasted even more slowly over a kind of griddle; but when a roasting takes place in a framework of nonsense you keep remembering it's just pretend. The awful things that happened in Barabbas or Spartacus or Ben-Hut seemed a great deal worse because they were done so much better.

Actually, apart from the,battles, Orgies, prisons, torturings, whippings, rapes, etc., inevitable in a religious epic, the depravity you might expect in this particular one is treated with such coyness that I wonder if an unsophisticated audience would realise what all the hints were about: the evil Queen of Sodom (Anouk Aimee) watching a poolful of girls cavorting in milk and feeding them titbits as if they were seals, or the long, lecherous looks exchanged during a little brand- ing session. Stanley Baker plays her brother with what looks like acute embarrassment, and a cast of (mostly Italian) thousands does its best, 1 supposes not to giggle. Of course, you might argue, as no doubt the makers of such a film do, that, as in Westerns, it's a case of goodies against baddies, that right triumphs and Sodom collapses (to the joy of the tricks department, no doubt, but terribly unconvincingly to outsiders) in a kind of atomic mushroom. But in this case silli- ness triumphs over everything — morality, wstheties, script (less bad than some), cast (moderately distinguished) and music (un- ashamedly dreadful);' it even triumphs over dis- approval—you can't be disgusted at anything quite so preposterous.