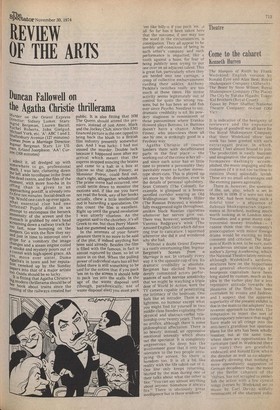 Murder on the Orient Express Director: Sidney Lumet. Stars: Ingrid Bergman, Lauren Baca11, Rachel Roberts, John Gielgud, Michael York, etc. 'A': ABC 1 and 2, Shaftesbury Avenue (127 minutes) Scenes from a Marriage Director: __Ingmar Bergman. Stars: Liv Ull"'an, Erland Josephson. 'AA': Curzon (168 minutes) I admit it, all dredged up with somewhere to go, professional death, I was late, clattering down ,.t.1.10 left aisle to collapse inthe front line dead centre, and the film of the Inotnent, with more hoo-ha in its .,°Ffing than is given to an 9Proaching pontiff, is already into Its first ten minutes. Social death on 14:13Would one catch up ever again, What essential clue had one forfeited? Pupils dilate in an attempt to encompass the berserk Immensity of the screen and the stomach is grabbed by one's head screaming down a railway track far 430, fast, nose bumping on the sieePers. Go with the flow they say and just in time to intercept one's gljoPe for a vomitory the image -Elanges and a steam engine coiled In smoke and mystery pours out of a tunnel with high-speed grace. Ah Yes, move over sister, Dame Natha's in town and her reputation tweeked up by the Sunday Papers into that of a major artiste noOujda should be so lucky.

It is fitting that Agatha Christie's R modern thrillerama should be of her .book about trains since the coining of the railways created her

public. It is also fitting that HM The Queen should attend the premiere, instead of just Anne, Mark and the Jockey Club, since this EMI financed picture is the one tipped to bring back the blush to a British film industry presently somewhat dun. And I was lucky. I had not missed the murder. Double luck because it happened soon after my arrival which meant that the express stopped mincing the brains and came to a halt in a box at Elstree so that Albert Finney, as Monsieur Poirot, could find out, that's right, altogether, whodunnit. The prime move had occurred, one could settle down to monitor the motions and, if like me you have not read the book, any of her books actually, chew a little intellectual cud in hazarding a speculation. On this count the film is excellent. Right up until the grand revelation I was utterly clueless. As the organist said to the choirboy, it's all Greek to me, but then Perry Mason had me gummed with confusions.

In the interests of your future pleasure there is no more to be said of the plot, if indeed anything has been said already. Besides the film is filled with the famous, in fact is almost ruptured by them, so let us move in on that. When the pulling power of individual stars has all but failed there is still something to be said for the notion that if you pack 'em on to the screen it should help to pack 'em into the stalls. In the age of the waste disposal unit (though, paradoxically, not of waste disposal alas) you must pack 'em like billy-o if you pack 'en. -I t all. So far has it been taken here that the outcome, if one may use the word in the circumstances, is constipation. They all appear to be terribly self-conscious of being in each other's company and each performance is impacted, like a tooth against a bone, for fear of being publicly seen trying to put one over on an adjacent talent. This is great fun, particularly when they are herded into one carriage, a creep of collective embarrassment curding their ankles. Anthony Perkins's twitches really are too much at these times. His motor activity seems legitimately out of control for quite the wrong' reasons, but he has been an odd fish ever since Psycho. Needless to say, dramatic credibility is nil. Its powdery staginess is reminiscent of those pantomimes where Frankie Howerd plays Buttons, i.e. Buttons doesn't have a chance. Albert Finney, who interviews them all one by one, is strikingly good in a Feydeau way.

Agatha Christie of course lumbers them with decaffeinated parts in the first place — the working out of the crime is her all — and since each actor has so little time to present a personality they inevitably resort to further stereotype short-cuts. This is played up yet more by the direction, even in the details of personal upholstery. Sean Cannery (The Colonel), for example, is glimpsed in a brown panelled corridor wearing an Old Wellingtonian tie. Wendy Hiller (The Russian Princess), a wonderfully exaggerated sight throughout, smokes black Russian cigarettes Whenever her nerves give out. There was, however, something in Vanessa Redgrave's wink (The Amused English Girl) which did not ring true to caricature. I squirmed whenever she did it and wondered why she had.

Without a doubt Orient Express is a vastly entertaining film. Ingmar Bergman's Scenes from a Marriage is not. In virtually every way it is the opposite cup of tea. Its dramatic credibility is absolute. Bergman has elicited from his deeply committed actors performances of such nervine sensitivity that we might be watching a triple dose of World In Action, were, the TV camera capable of penetrating the intimacy of the bedroom. One feels like an intruder. There is no lightness, no humour except what you might find for yourself in two middle class Swedes exploring their physical and abstract-verbal relationship over twenty years. There is no artifice, although there is some philosophical affectation. There is no beauty; instead, an oppressive emotional intensity which shuts out the spectator. It is completely ungenerous. So deep has the involvement gone that it only has relevance to the two people occupying the screen. So there is boredom too. It is all a bit like reality with the life taken out of it. One line only keeps returning, blurted by the man during one of their talks about what the other is like. "You can say almost anything about anyone. Somehow it always fits." There is obviously great intelligence but is there wisdom?