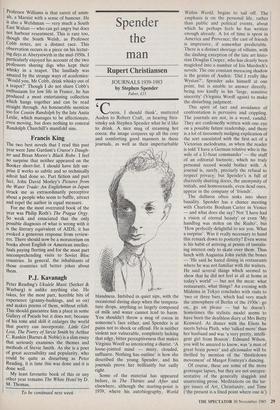 The two best novels that I read this past year were Jane Gardam's Crusoe's Daugh- ter and Brian Moore's Black Robe. I feel no surprise that neither appeared on the Booker short-list. I should have felt sur- prise if works so subtle and so technically adroit had done so. Part fiction and part fact, John David Morley's Pictures from the Water Trade: An Englishman in Japan struck me as extraordinarily perceptive about a people who seem to baffle, attract and repel the author in equal measure.