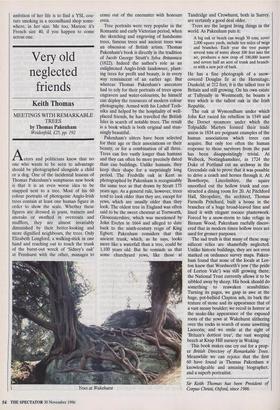 MEETINGS WITH REMARKABLE TREES by Thomas Pakenham Weidenfeld, £25, pp. 192 Actors and politicians know that no one who wants to be seen to advantage should be photographed alongside a child or a dog. One of the incidental lessons of Thomas Pakenham's sumptuous new book is that it is an even worse idea to be snapped next to a tree. Most of his 60 colour portraits of photogenic Anglo-Irish trees contain at least one human figure in order to show the scale. Whether these figures are dressed in jeans, trainers and anoraks or swathed in overcoats and mufflers, they are almost invariably diminished by their better-looking and more dignified neighbours, the trees. Only Elizabeth Longford, a walking-stick in one hand and reaching out to touch the trunk of the burnt-out wreck of 'Sidney's oak' at Penshurst with the other, manages to come out of the encounter with honours even.

Tree portraits were very popular in the Romantic and early Victorian period, when the sketching and engraving of handsome trees, famous trees and ancient trees was an obsession of British artists. Thomas Pakenham's book is directly in the tradition of Jacob George Strutt's Sylva Britannica (1822). Indeed the author's role as an enlightened Anglo-Irish landowner, plant- ing trees for profit and beauty, is in every way reminiscent of an earlier age. But whereas Thomas Pakenham's ancestors had to rely for their portraits of trees upon engravers and water-colourists, he himself can deploy the resources of modem colour photography. Armed with his Linhof Tech- nika and helped by the hospitality of well- placed friends, he has travelled the British Isles in search of notable trees. The result is a book which is both original and stun- ningly beautiful.

Pakenham's sitters have been selected for their age or their associations or their beauty, or for a combination of all three. Trees can live vastly longer than humans and they can often be more precisely dated than can buildings. Unlike humans, they keep their shape for a surprisingly long period. The Fredville oak in Kent as photographed by Pakenham is recognisably the same tree as that drawn by Strutt 175 years ago. As a general rule, however, trees tend to look older than they are, except for yews, which are usually older than they look. The oldest tree in England was often said to be the sweet chestnut at Tortworth, Gloucestershire, which was mentioned by John Evelyn in 1664 and alleged to date back to the ninth-century reign of King Egbert. Pakenham considers that this ancient trunk, which, as he says, looks more like a waterfall than a tree, could be 1,100 years old. But he reminds us that some churchyard yews, like those at Yews at Wakehurst Tandridge and Crowhurst, both in Surrey, are certainly a good deal older.

Trees are the largest living things in the world. As Pakenham puts it: A big oak or beech can weigh 30 tons, cover 2,000 square yards, include ten miles of twigs and branches. Each year the tree pumps several tons of water about 100 feet into the air, produces a new crop of 100,000 leaves and covers half an acre of trunk and branch- es with a new pelt of bark.

He has a fine photograph of a snow- covered Douglas fir at the Hermitage, Dunkeld; at 212 feet, it is the tallest tree in Britain and still growing. On his own estate at Tullynally in Westmeath, he boasts a tree which is the tallest oak in the Irish Republic.

The oak at Wymondham under which John Ket rasied his rebellion in 1549 and the Dorset sycamore under which the Tolpuddle Martyrs formed their trade union in 1834 are poignant examples of the human associations which trees can acquire. But only too often the human response to these survivors from the past has been disappointingly trivial. At Welbeck, Nottinghamshire, in 1724 the Duke of Portland cut an archway in the Greendale oak to prove that it was possible to drive a coach and horses through it. At Bowthorpe, Lincolnshire, the squire smoothed out the hollow trunk and con- structed a dining room for 20. At Pitchford Hall, Shropshire, the architect, Thomas Farnolls Pritchard, built a house in the branches of a huge broad-leaved lime and lined it with elegant rococo plasterwork. Forced by a snow-storm to take refuge in Bimam Wood, Pakenham ruefully discov- ered that in modern times hollow trees are used for grosser purposes.

The sad truth is that many of these mag- nificent relics are shamefully neglected. Unlike historic buildings, they are not even marked on ordnance survey maps. Paken- ham found that none of the locals at Lor- ton knew that Wordworth's yew ('the pride of Lorton Vale') was still growing there; the National Trust currently allows it to be nibbled away by sheep. His book should do something to reawaken sensibilities. Turning its pages, we gasp in awe at the huge, pot-bellied Clapton ash, its bark the texture of stone and its appearance that of a vast mossy boulder; we recoil in horror at the snake-like appearance of the exposed roots of the yews at Wakehurst slithering over the rocks in search of some unwitting LaocoOn; and we smile at the sight of 'Britain's dottiest tree', the vast weeping beech at Knap Hill nursery in Woking.

This book makes one cry out for a prop- er British Directory of Remarkable Trees. Meanwhile we can rejoice that the first 60 have found in Thomas Pakenham a knowledgeable and amusing biographer, and a superb portraitist.

Sir Keith Thomas has been President of Corpus Christi, Oxford, since 1986.