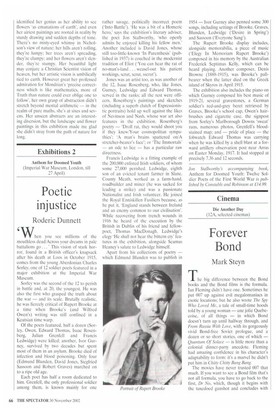 When you see millions of the mouthless dead/Across your dreams in pale battalions go „ . ' This vision of stark horror, found in a British officer's knapsack after his death at Loos in October 1915, comes from the young Aberdonian Charles Sorley, one of 12 soldier poets featured in a major exhibition at the Imperial War Museum.

Sorley was the second of the 12 to perish in battle and, at 20, the youngest. He was also the first who grasped the truth about the war — and its scale. Brutally realistic, he was fiercely critical of Rupert Brooke at a time when Brooke's (and Wilfred Owen's) writing was still confined in a Keatsian time warp.

Of the poets featured, half a dozen (Sorley, Owen, Edward Thomas, Isaac Rosenberg, Julian Grenfell and Francis Ledwidge) were killed; another, Ivor Gurney, survived by two decades but spent most of them in an asylum. Brooke died of infection and blood poisoning. Only four (Edmund Blunder', David Jones, Siegfried Sassoon and Robert Graves) marched on to a ripe old age.

Each poet has half a room dedicated to him. Grenfell, the only professional soldier among them, is known mainly for one

rather savage, politically incorrect poem (Into Battle"). 'He was a bit of a Homeric hero,' says the exhibition's literary adviser, the poet Jon Stallworthy, 'who openly admits he enjoyed killing his fellow men.' Another included is David Jones, whose still too-little-known -In Parenthesis' (published in 1937) is couched in the modernist tradition of Eliot (You can hear the rat of

Jones was an artist too, as was another of the 12, Isaac Rosenberg, who, like Jones, Gurney, Ledwidge and Edward Thomas, served in the ranks: all the rest were officers. Rosenberg's paintings and sketches (including a superb clutch of Expressionistic portraits) hold up well against the likes of Nevinson and Nash, whose war art also features in the exhibition. Rosenberg's poetry — 'Droll rat, they would shoot you if they knew/Your cosmopolitan sympathies'; 'A man's brains spattered on/A stretcher-bearer's face': or 'The Immortals' — an ode to lice — has a particular raw directness.

Francis Ledwidge is a fitting example of the 200,000 enlisted Irish soldiers, of whom some 27,000 perished. Ledwidge, eighth son of an evicted tenant farmer in Slane, County Meath, worked as a farm-hand, roadbuilder and miner (he was sacked for leading a strike) and was a passionate Nationalist and Irish volunteer. He joined the Royal Enniskillen Fusiliers because, as he put it, 'England stands between Ireland and an enemy common to our civilisation'. While recovering from trench wounds in 1916 he heard of the execution by the British in Dublin of his friend and fellowpoet, Thomas MacDonagh. Ledwidge's elegy He shall not hear the bittern cry' features in the exhibition, alongside Seamus Hcaney's salute to Ledwidge himself.

Apart from his collections of poetry — which Edmund Blunden was to publish in 1954 — Ivor Gurney also penned some 300 songs, including settings of Brooke, Graves, Blunden, Ledwidge (Desire in Spring') and Sassoon (Everyone Sang').

The Rupert Brooke display includes, alongside memorabilia, a piece of music ('Elegy In Memoriam Rupert Brooke') composed in his memory by the Australian Frederick Septimus Kelly, which can be heard playing. Another composer. Denis Browne (1888-1915), was Brooke's pallbearer when the latter died on the Greek island of Skyros in April 1915.

The exhibition also includes the piano on which Gurney composed his best music of 1919-21, several gravestones, a German soldier's red-and-grey beret retrieved by Graves, Brooke's school cap. Owen's hairbrushes and cigarette case, the signpost from Sorley's Marlborough Downs 'sweat' runs, numerous photos. Grenfell's bloodstained map; and — pride of place — the fobwatch Edward Thomas was carrying when he was killed by a shell blast at a forward artillery observation post near Arras on Easter Monday, 1917. It had stopped at precisely 7.36 and 12 seconds.

Jon Stallworthy's accompanying book, Anthem for Doomed Youth: Twelve Soldier Poets of the First World War is published by Constable and Robinson at £14.99.