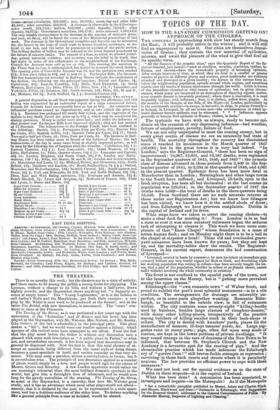 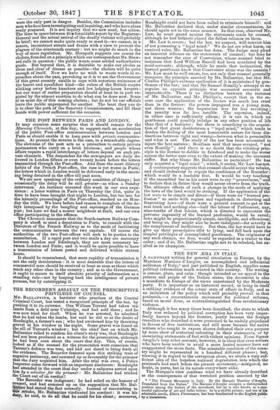 HOW IS THE SANATORY COMMISSION GETTING ON! APPROACH OF THE CHOLERA.

THE CHOLERA is approaching with slow but steady- march from the East; it will probably arrive in the winter ; and it will still find us unprepared to meet it. Our cities a/1e themselves deposi- tories of disease ; they contain the raw material of epidemics, miasma, and await the pleasure of the wind to give that foul air its specific virus. "Ali the diseases of the zymotic class," says the Quarterly Report of the Re- gistrar-General, just issued—"such as smallpox, measles, searletma, typhus, in- fluenza, and cholera—have the remarkable property of becoming epidemic. After certain intervals of time, in which they are fatal to a smaller or greater number of persons in different places and seasons, great multitudes are suddenly attacked and destroyed in a given locality ; the disease in this intense form in- volves the neighbouring population, spreads around whole regions, and sometimes travels over the tracks of human intercourse through the world. Little is known of the immediate chemical or vital causes of epidemics; but in given circum- stances, where many are immersed in an atmosphere of decaying organic matter, some zymotie disease is invariably produced; where there is starvation, it is most frequently typhus; cold, influenza; heat, it is cholera, yellow fever, plague. At the mouths of the Ganges, of the Nile, of the Niger—in London, particularly up to the seventeenth century—in camps, in barracks, in ships, in prisons formerly—. in Ireland, in Liverpool, in all our towns now—the circumstances in which zy- motic diseases become epidemic may be witnessed. * Influenza appears generally to become first epidemic in Russia; cholera, in India."

The typhoids we have with us always, ready to become epi- demic on the occasion of any depressing influence—bad weather, failure of employment, poverty, failure of food.

We are not only unprepared to meet the coming enemy, but in every great centre of disease we see an unusually bad state of health. The mortality throughout the country has diminished since it reached its maximum in the March quarter of 1847 (56,000); but in the great towns it is very bad indeed. "In London," says the Registrar-General, "there has been no sign of improvement : 10,987, 12,601, and 13,187 deaths, were registered in the September quarters of 1845, 1846, and 1847": the zymotic class of disease advanced in those periods from 2,409 in the Sep- tember quarter of 1845, to 3,234 in that quarter of 1846, and 4,061 in the present quarter. Epidemic fever has been more fatal in Manchester than in London ; Birmingham and other large towns to the North have suffered; and Liverpool, ill-built, open to the Irish irruption, has been all but decimated : at the last census its population was 223,054; in the September quarter of 1847 the deaths were 5,669—the total of deaths in the three quarters being 13,546. From Scotland there are no such accurate returns as those under our Registration Act ; but we know how Glasgow has been visited, we know how it is the settled abode of fever ; and from Edinburgh we have grievous complaints. Dublin is the capital of Ireland and its fever. What steps have we taken to arrest the coming cholera—to make a clear deck for meeting it ? None. London is in as bad a state as ever it was since sanatory reformers began the arduous task of attempting- to cleanse it. This week we have more com- plaints of that "non Chapel" whose foundation is a mass of rotten human flesh; and on Monday night there is to be a ball in the chapel at sixpence a head I These old and overloaded grave- yard nuisances have been known for years ; but they are kept up, and the mortality-tables show the results. The Registrar. General, in his current report, denounces the bad construction of Liverpool— "Liverpool, created in haste by commerce, by men too intent on immediate gain —reared without any very tender regard for flesh or blood, and flourishing wine her working population was rotting in cellars—has been severely taught the les- son, that a part of the population, whether in cellars or on distant shores, cannot suffer without involving the whole community in calamity."

The fever is not confined to the squalid parts of the town, nor to the lazarettos on the Mersey, but is "getting more prevalent among the upper classes." Edinburgh—the "own romantic town" of Walter Scott, and proud to exhibit the poet's most splendid monument—is in a vile condition. The arrangements for drainage are miserably im- perfect, or in some parts altogether wanting. Romantic Edin- burgh, so beautiful to the outside view, is full of rottenness 'within. The city contains some seventy-eight "killing-booths used by butchers, besides large clusters of slaughter-houses," with many other killing-places, irrespectively of the practice among butchers of killing smaller stock in their back-shops or cellars. The city is dotted with knackers' yards places for the manufacture of manure, ill-kept tanners' yards, ier.c. Large pig- geries exist in many parts ; pigs, often fed upon soup made of carrion, are kept in the lower portions of private dwellings. " It may sound strange in the ears of denizens of the New Town to be informed, that between St. Stephen's Church and the New Academy is a favourite spot for the rearing of pigs." And the abominable practice which has made infamous the Edinburgh cry of "gardez Pesti!" still braves feeble attempts at repression ; surviving in those back courts and streets where it is peculiarly noxious. The law provides no efficient power to cope with these nuisances.*

We need not look out for special evidence as to the state of Dublin in these respects—it is the capital of Ireland.

What has been done? A commission has been appointed, to investigate and inquire—in the Metropolis! As if the Metropolis • See a remarkable pamphlet published by Messrs. Adam and Charles Black and Messrs. Blackwood and Sons—" Nuisances in Edinburgh, with Suggestions for the Removal thereof; addressed to the General Commissioners of Police. BY Alexander Murray, Inspector of Lighting and Cleaning." were the only part in danger. Besides, the Commission includes men whohavebeen investigating and inquiring, and who have plans ready prepared. It is not inquiry that we now need, but action. The time to spare between this formidable report by the Registrar- General and the actual arrival of the deadly visitant will probably be brief; we cannot make quite ready to meet it—we cannot, in a season, reconstruct streets and drains with a view to prevent the plagues of the nineteenth century : but we might do much in the way of mere regulation. Mr. Herapath suggests one course for cholera, founded on a principle which our correspondent Mr. Shew- ard calls in question : the public wants some settled authoritative guide. But beyond that, it is desirable to make our abodes as clean and clear of disease as possible—the cholera will be quite enough of itself. Now we have no wish to waste words in re- proaches about the past, provoking as it is to see the Government of this great country unable to cope with notorious nuisances of the basest and squalidest kind—the rulers of the British empire slinking away before knackers and low lodging-house keepers : but our want of earlier preparation should at least be in part ex- piated by the utmost exertion to do what can be done now. Some of us must die of this coming cholera ; but do not let our officials leave the public unprepared for another. The least they can do is to clear the path of the Sanatory Commissioners, and fill their hands with power sufficient for the occasion.