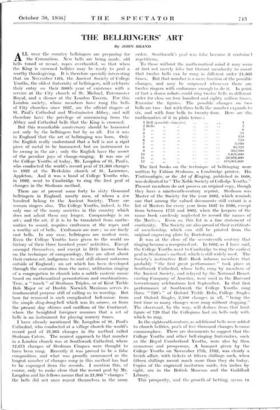 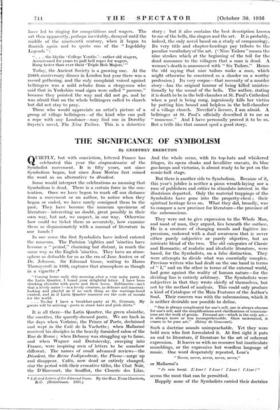 By JOHN SHAND But this remarkable anniversary should be honoured not only by the bellringers but by us all. For it was in England that the art of bellringing was born. Only the English really understand that a bell is not a rigid piece of metal to be hammered, but an instrument to be swung in the air ; only the English have the secret of the peculiar joys of change-ringing. It was . one of the College Youths of today, Mr. Langdon of St. Paul's, who conducted the world's record peal of 21,363 changes in 1922 at the Berkshire church of St. Lawrence, Appleton. And it was a band of College Youths who, in 1682, went to Cambridge to ring the, first peal of changes in the Stedman method.

There are at present some forty to sixty thousand bellringers in England, mostly . men, of whom a few hundred belong to the Ancient Society. There are women ringers also. The College Youths, indeed, is the only one of the many societies in this country which does not admit them any longer. Campanology is an art ;. and the art, if it is to be translated from mathe- matics to sound, requires craftsmen at the ropes and a worthy set of bells. Craftsmen are rare ; so are finely cast bells. In any case, bellringers are modest men. Even the .College Youths have given to the world no history of their three hundred years' activities. Except amongst themselves, and except in little known books on the teclmique of campanology, they arc silent about their curious art, indigenous to and still almost unknown outside of England ; an art which has been developed through the centuries from the naive, utilitarian ringing of a congregation to church into a subtle esoteric music based on .mathematical permutations and combinations. True, a "touch " of Stedman Triples, or of Kent Treble Bob Major or of Double Norwich Maximus serves its fundathental purpose still of calling us to worship. But how far removed is such complicated bell-music from the simple ding-dong-bell which was its source, or from the present day chimes and carillons of the Continent, where the benighted foreigner assumes that a set of bells. is an instrument for playing' nursery tunes.

I have already mentioned Mr. Langdon of St. Paul's Cathedral, who conducted at a village church the world's record peal of 21,363 changes in the method called Stedman Caters. The nearest approach to that number in a London church was at Southwark Cathedral, where 12,675 changes of Stedman Cinques were thought to have -been rung. Recently it was proved to be a false composition, and what was proudly announced as the longest number 'of ChangeS rung in this method has had to be expunged from the records. I mention this, of course, only to make Clear that the record peal by Mr.

Langdon and his fellows means that in 21,363 " changes " the bells did not once repeat themselves in the same order. Southwark's peal was false because it containe.l repetitions.

To those without the mathematical mind it may seem at first not merely false but blatant mendacity to assert that twelve bells can be rung in different order 21,363 times. But that number is a mere fraction of the possible changes, and may be surpassed whenever there arc twelve ringers with endurance enough to do it. In point of fact a dozen robots could ring twelve bells in different order for close on four hundred and eighty million times. Examine the figures. The possible changes on two bells arc two—but with three bells the number expands to six, and with four bells to twenty-four. Here are the mathematics of it in plain terms :

The first hooks on the technique of bellringing were written by Fabian Stedman, a Cambridge printer. His Tintinnalogia, or the Art of Ringing, published in 1668, was dedicated to " The Noble Society of ColWge Youths." Present members do not possess an original copy, though they have a nineteenth-century reprint. Stedman was Master of the Society for the year 1682, which reminds one that among the valued documents still extant is a list of Masters for every year from 1637 to 1986, except from between 1755 and 1802, when the keepers of the name book carelessly neglected to record the names of the Mastc:.,.:. Even so, this list is a fine statement of continuity. The Society are also proud of their certificate of membership, which can still be printed from the original engraving plate by Bartolozzi.

It was at the close of the seventeenth century that ringing became a recognised art. In 1682, as I have said, the College Youths went to Cambridge to ring the earliest peal in Stedman's method, which is still widely used. The Society's instructive Rule Book informs members that probably " the first great performance " took place at Southwark Cathedral, whose bells, rung by members of the Ancient Society, and relayed by the National Broad- casting Company of America, were used in the Harvard tercentenary celebrations last September. In that first performance at Southwark the College Youths rang three " 720's " of Oxford Treble Bobs, College Singles and Oxford Singles, 2,160 changes in all, " being the first time so many changes were rung without stopping." The observant, by the way, will deduce from that limit figure of .720 that the Collegians had six bells only with which to ring.

In the eighteenth century, as additional bells were added to church belfries, peals of five thousand changes became commonplace. There are documents to suggest that the College Youths and other bell-ringing fraternities, such as the Royal Cumberland Youths, were also by then numerous and prosperous. A banquet given by the College Youths on November 17th, 1762, was clearly a lavish affair, with tickets at fifteen shillings each, when fifteen shillings meant much more than they do today. Copies of the engraved invitation cards, ten inches by eight, are in the British Museum and the Guildhall Library.

This prosperity, and the growth of betting, seems to have led to ringing for competitions and wagers. The art then apparently, perhaps inevitably, decayed until the middle of the nineteenth century, when it began to flourish again and to quote one of the " Ingoldsby Legends ": " . . . the blythe College Youths'—rather old stagers, Accustomed for years to pull bell ropes for wagers, Rang faster than ever their Triple Bob Majors. "

Today, the Ancient Society is a growing one. At the 298th anniversary dinner in London last year there was a record gathering, and the only complaint voiced against bellringers was a mild rebuke from a clergyman who said that in Yorkshire road signs were called " parsons." because they pointed the way and did not go, and he was afraid that on the whole bellringers called to church but did not stay to pray.

Those who would appreciate an artist's picture of a group of village bellringers—of the kind who can pull a rope with any Londoner—may find one in Dorothy Sayers's novel, The Nine Tailors. This is a detective story : but it also contains the best description known to me of the bells, the ringers and the art. It is probably, indeed, the. only novel based on a study of campanology. Its very title and chapter-headings pay tribute to the peculiar vocabulary of the art. ("Nine Tailors "means the nine strokes which at the beginning of the toll for the dead announce to the villagers that a man is dead. A woman's death is announced with " Six Tailors." Hence the 'old saying –that nine tailors make a' Man, which might otherwise be construed as a slander on a' worthy profession.) RS very corpse—that necessity of a .murder story—has the original honeur of being killed .uninten- tionally by the sound of the bells. The author, stating it is death to be in the bell-chamber at St. Paul's Cathedral when a peal is being rung, ingeniously kills her victim by putting him bound and helpless in the bell-chamber of a village church. Novelist's licence, I am afraid. A bellringer at St. Paul's officially described it to me as " nonsense." And I have personally proved it to be so. But a trifle like that cannot spoil a good story.