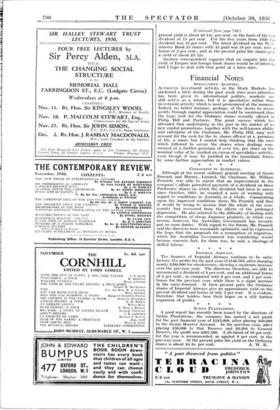 ALTHOUGH investment activity in the Stock Markets has slackened a little during the past week since more attention has been given to international politics, markets are still active as a whole, but it is speculative rather than investment activity which is most pronounced at the moment. Indeed,. no better instance, perhaps, of the desire to secure profits through capital appreciation could be mentioned than the huge rush for the Ordinary shares recently offered in Philip Hill and Partners. The great success which has attended that undertaking in the past in the matter of 'its new capital promotions, together with the well-known ability and enterprise of the Chairman, Mr. Philip Hill, may well account for the rush for the 5s. shares offered at a premium of 10s. a share, but I cannot help thinking that the rush which followed to secure the shares when dealings com- menced at a further premium of over 15s. per share on the nominal value of 5s. marked an excess of speculative activity, even though it may be justified in the • immediate future by some further appreciation in market values.

Although at the recent ordinary general meeting of Goode Durrant and Murray, Limited, the Chairman, Mr. William Pennick, was able to report that an improvement in the company's affairs permitted payment of a dividend on those Preference shares on which the dividend had been in arrear since October, 1931, he sounded a note of warning with regard to conditions in Australia as a whole. Commenting upon the improved conditions there, Mr. Pennick said that it would be wrong to assume that the whole of the com- munity had recovered from the effects of the prolonged depression. He also referred to the difficulty of dealing with the competition of cheap Japanese products, in which con- nexion, however, the Australian Government has recently put on more duties. With regard to the future, Mr. Pennick said the directors were reasonably optimistic, and he expressed the hope that the proposals for a resumption of migration, which the Australian Government was considering, would become concrete fact, for there was, he said, a shortage of skilled labour.

The finances of Imperial Airways continue to be satis- factory, the profits for the past year of £140,705, after charging nearly £200,000 for obsolescence, showing a moderate increase over the previous year. The directors, therefore, are able to recommend a dividend of 6 per cent. and an additional bonus of 2 per cent., as compared with 6 per cent. and 1 per cent.

• bonus for the previous year, while there is a slight increase in the carry-forward. At their present price, the Ordinary shares of Imperial Airways give an approximate yield on the present dividend and bonus_ of only 3 per cent. It is evident, therefore, that holders base their hopes on a still further expansion of profits.

A good report has recently been issued by the directors of Sudan Plantations; the company has earned a net profit for the past financial year of £285,000, after plaeing 260,000 to the Gezira Reserve Account. In the previous year, after placing £50,000 to that Reserve and £6,294 to General Reserve, the profit was £201,380. A dividend of per cent. for the year is recommended, as -against 8 per cent. in the previous year. At the present price the yield on the Ordinary shares is about £4 3s. per cent. A. W. K.