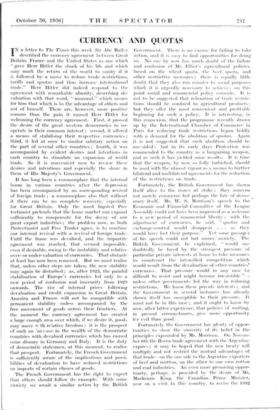 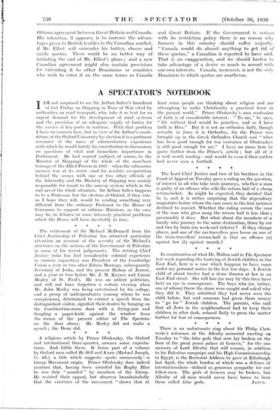 a letter to The Times this week Sir Abe Bailey I T described the currency agreement between Great Britain, France and the United States as one which " gave Herr Hitler the shock of his life and which may mark the return of the world to sanity if it is followed by a move to reduce trade restrictions, tariffs and quotas and thus increase international trade." Herr Hitler did indeed respond to the agreement with remarkable alacrity, describing de- valuation with that word, " immoral," which means for him that which is to the advantage of others and not of himself. There are, however, more positive reasons than the pain it caused Herr Hitler for welcoming the currency agreement. First, it proved the desire of the great western democracies to co- operate in their common interest ; second, it offered a means of stabilising their respective currencies ; third, it led at once to similar salutary action on the part of several other countries ; fourth, it was accompanied by evident desires and intentions in each country to stimulate an expansion of world trade. So it is convenient now to review these desires and intentions and especially the share in them of His Majesty's Government.

It has long been a commonplace that the internal boom in various countries after the depression has been accompanied by no corresponding revival of foreign trade ; a commonplace also that without it there can be no complete recovery, especially for Great Britain. Only the most bigoted Pro- tectionist pretends that the home market can expand sufficiently to compensate for the decay of our great export industries ; the problem now, as both- Protectionist and Free Trader agree, is to combine our internal revival with a revival of foreign trade. Until the franc was devalued, and the tripartite agreement was reached, that seemed impossible,' even if desirable, owing to the instability and relative over- or under-valuation of currencies. That obstacle at least has now been removed. But we must realise that, unless other steps are taken, the new stability may again be disturbed ; as, after 1925, the painful stabilisation of Europe's currencies led only to a new period of confusion and insecurity from 1929- onwards. The rise of internal prices following devaluation and credit expansion in Great Britain, America and France will not be compatible with permanent stability unless accompanied -by the free movement of goods across their frontiers. At the moment the currency agreement has created a large enough area over which, if we desire it, goods may move w.th relative freedom ; it is the prospect of such an 'flcrease in the wealth of the democratic countries with devalued currencies which has caused some dismay in Germany and Italy. It is the duty of democratic statesmen, at this moment, to realise that prospect: Fortunately, the French Government is sufficiently aware of the implications and possi- bilities of devaluation to have reduced restrictions on imports of certain classes of goods.

The French Government has the right to expect' that other's 'should-follow its example.' "With some" anxiety- we - await a similar action by the Government. There is no excuse for failing to take action, and it is easy to find opportunities for doing so. No one by now has much doubt of the failure and confusion of Mr. Elliot's agricultural policies, based on the wheat quota, the beef quota, and other restrictive measures ; there is equally little doubt that they also run counter to social purposes which it is urgently necessary to achieve; on this point social and commercial policy coincide. It is not to be suggested that relaxation of trade restric- tions should be confined to agricultural products but they offer the most convenient and profitable beginning for such a policy. It is interesting, in this connexion, that the programme recently drawn up by the International Chamber of Commerce in Paris for reducing trade restrictions began boldly with a demand for the. abolition of quotas. Again it is not suggested that such abolition should be one-sided ; but in its early days Protection was commended to the country as a bargaining weapon, and as such it has yielded sonic results. It is time that the weapon, by now so fully furbished, should be used with the utmost vigour as a means to further bilateral and multilateral agreements for the reduction of the restrictions on trade.

Fortunately, the British Government has shown itself alive to the issues at stake ; they concern not merely commerce but perhaps the fate of demo- cracy itself. Mr. W. S. Morrison's speech to the Economic and Financial Committee of the League Assembly could not have been improved as a welcome to a new period of commercial liberty ; with the adjustment of currencies, he said, " quotas and exchange-control would disappear . . . as they would have lost their purpose." Yet sonic passages of his speech could not but arouse anxiety. The British Government, he explained, " would un- doubtedly be faced by the strongest pressure of particular private interests at home to take measures to counteract the intensified competition which would result from the devaluation of other countries' currencies. That pressure would in any case Le difficult to resist and might becoMe irresistible "- unless other governments led the way in reducing restrictions. We know these private interests ; and the Government in several instances has already shown itself too susceptible to their pressure. It must not be in this case ; and it ought to know by now, after bitter experience, that policies of waiting, in present circumstances, give more opportunity for evil than good.

Fortunately the Government has plenty of oppor- tunities to show the sincerity of its belief in the principles expounded by Mr. Morrison. On Novem- ber 6th the Rocca trade agreement with the Argentine expires ; it may be hoped that the new treaty will multiply and not restrict the mutual advantages of that trade—on the one side to the Argentine exporters of beef and mutton, on the other to our own cotton and coal industries. An even more promising oppor- tunity, perhaps, is provided by the desire of Mr. Mackenzie King, the Canadian Prime Minister, now on a visit to this country, to revise the 1932 Ottawa agreement between Great Britain and Canada. His intention, it appears, is to increase the advan- tages given to British textiles in the Canadian market, if Mr. Elliot will surrender his butter, cheese and cattle quotas. There could be no better way of initiating the end of Mr. Elliot's plans ; and a new Canadian agreement might also contain provisions for extending it to other Dominions or countries who wish to enter it on the same terms as Canada and Great Britain. If the Government is serious with its restriction policy there is no reason why farmers in this country should suffer unjustly. " Canada would do almost anything to get rid of these quotas," a Canadian is reported to have said. That is no exaggeration, and we should hasten to take advantage of a desire so much in accord with our own interests. Canada, moreover, is not the only Dominion to which quotas are anathema.