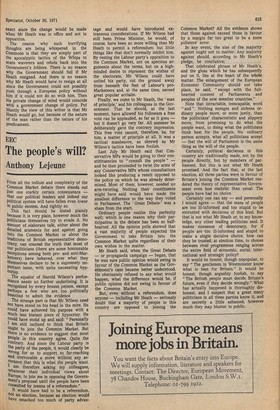 From all the tedium and complexity of the Common Market debate there stands out lust one starkly certain consequence — that our political leaders and indeed our Political system will have fallen even lower In public esteem. And rightly so.

This fact should be stated plainly because it is very plain, however much the Politicians themselves try to evade it. No amount of elaborate talk, either about the etailed aruments for and against going Into the Common Market or about the traditions of British representative democracy, can conceal the truth that most of our politicians (there are some honourable exceptions among both proand anti-Marketeers) have behaved, over what they themselves declare to be a supremely imPortant issue, with quite nauseating hypocrisy.

The squalor of Harold Wilson's perforMance needs no further underlining. It is recognized by every honest person, except Perhaps a few who are too politically besotted to admit the evidence The strange part is that Mr Wilson need not have stood on his head in the mire. He could have achieved his purpose with a Much less blatant piece of hypocrisy. He could have stood up and said: "Personally I am still inclined to think that Britain ought to join the Common Market. But there is no evidence to suggest that most People in this country agree. Quite the contrary. And since the Labour party is the party of the people, it would clearly be wrong for us to support so far-reaching and irrevocable a move without any assurance that this is what the people want. I am therefore asking my colleagues, Whatever their individual views about Europe, to join me in opposing the Government's proposal until the people have been Consulted by means of a referendum."

tage and would have introduced extraneous considerations. If Mr Wilson had still been Prime Minister, he would, of course, have been no more willing than Mr Heath to permit a referendum: but little things like that don't normally inhibit him. By resting the Labour party's opposition to the Common Market, not on specious arguments about the terms, but on a highminded desire to represent the wishes of the electorate, Mr Wilson could have united his party, cut the ground away from beneath the feet of Labour's proMarketeers and, at the same time, earned great popular acclaim.

Finally, we come to Mr Heath, the 'man of principle,' and his colleagues in the Government. That he should, at the last moment, have allowed his followers a free vote can be applauded, as far as it goes — but it doesn't go very far. All summer he deliberately gave the contrary impression. This free vote cannot, therefore, be, for him, a matter of principle at all. It was a tactical manoeuvre, as shrewd as Mr Wilson's tactics have been foolish.

Last July Mr Heath said that Conservative MPs would be going to their constitituencies to "consult the people" — and he then proceeded to twist the arms of any Conservative MPs whose consultations looked like producing a result opposed to the policy on which he was already determined. Most of them, however, needed no arm-twisting. Nothing their constituents might have said would have made the smallest difference to the way they voted in Parliament. The 'Great Debate' was a sham from the start.

Ordinary people realize this perfectly well; which is one reason why their participation in the debate has been so halfhearted. All the opinion polls showed that a vast majority of people expected the Government to take Britain into the Common Market quite regardless of their own wishes in the matter.

But, even without a referendum, does anyone — including Mr Heath — seriously doubt that a majority of people in this country are opposed to joining the Common Market? All the evidence shows that those against exceed those in favour by a margin far too great to be a mere pollsters' error.

In any event, the size of the majority against ought not to matter. Any majority against should, according to Mr Heath's pledge, be conclusive; That celebrated phrase of Mr Heath's, and the gloss which he has subsequently put on it, lies at the heart of the whole matter. The enlargement of the European Economic Community should not take place, he said, "except with the fullhearted consent of Parliaments and peoples of the new member countries."

Certainly, political decisions in this country are traditionally made, not by the people directly, but by members of parliament. But this is not what Mr Heath promised. And the fact that, at the last election, all three parties were in favour of Britain's joining the Common Market rendered the theory of representative Government even less realistic than usual. The people have had no choice.

Certainly one can say — and personally I would agree — that the mass of people are too ill-informed and too stupid to be entrusted with decisions of this kind. But that is not what Mr Heath or, to my knowledge, any other leading politician said. It makes nonsense of democracy, for if people are too ill-informed and stupid to make a single decisive choice, how can they be trusted, at election time, to choose between rival programmes ranging across the entire field of economic, social, international and strategic policy?

It would be honest, though unpopular, to say "The gentlemen in Westminster know what is best for Britain." It would be honest, though arguably foolish, to say " The British people must decide Britain's future, even if they decide wrongly." What has actually happened is thoroughly dishonest, and I suspect that a great many politicians in all three parties know it, and are secretly a little ashamed, however much they may bluster in public.