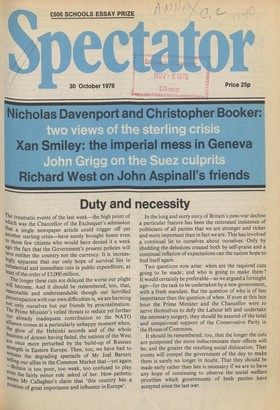 The traumatic events of the last week—the high point of which was the Chancellor of the Exchequer's admission that a single newspaper article could trigger off yet another sterling crisis—have surely brought home even to those few citizens who would have denied it a week agO the fact that the Government's present policies will 8.aVe neither the country nor the currency. It is increasinglY apparent that our only hope of survival lies in s1ubstantial and immediate cuts in public expenditure, at least of the order of £3,000 million. .The longer these cuts are delayed the worse our plight will become. And it should be remembered, too, that, reasonable and understandable though our horrified Preoccupation with our own difficulties is, we are harming I.;.Ot only ourselves but our friends by .procrastination. IL Prime Minister's veiled threats to reduce yet further 1311.r already inadequate contribution to the NATO atillance comes at a particularly unhappy moment when, glow of the Helsinki accords and of the whole -lasiness of detente having faded, the nations of the West 4,,re once more perturbed by the build-up of Russian watrength in Eastern Europe. Then, too, we have had to t ess the degrading spectacle of Mr Joel Barnett ellin" our allies in the Common Market that—yet again Britain is too poor, too weak, too confused to play sven the fairly minor role asked of her. How pathetic s Mr Callaghan's claim that 'this country has a Pc'sitl°n of great importance and influence in Europe'.

In the long and sorry story of Britain's post-war decline a particular feature has been the reiterated insistence of politicians of all parties that we are stronger and richer and more important than in fact we are. This has involved a continual lie to ourselves about ourselves. Only by shedding the delusions created both by self-praise and a continual inflation of expectations can the nation hope to find itself again.

Two questions now arise: when are the required cuts going to be made; and who is going to make them ? It would certainly be preferable—as we argued a fortnight ago—for the task to be undertaken by a new government, with a fresh mandate. But the question of who is of less importance than the question of when. If even at this late hour the Prime Minister and the Chancellor were to nerve themselves to defy the Labour left and undertake the necessary surgery, they should be assured of the total and unequivocal support of the Conservative Party in the House of Commons.

It should be remembered, too, that the longer the cuts are postponed the more indiscriminate their effects will be, and the greater the resulting social dislocation. That events will compel the government of the day to make them is surely no longer in doubt. That they should be made early rather than late is necessary if we are to have any hope of continuing to observe the social welfare priorities which governments of both parties have accepted since the last war.