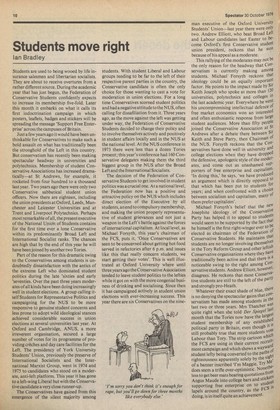 Students are used to being wooed by life insurance salesmen and libertarian socialists.

They are about to receive overtures from a rather different source. During the academic year that has just begun, the Federation of

Conservative Students confidently expects to increase its membership five-fold. Later this month it embarks on what it calls its first indoctrination campaign in which posters, leaflets, badges and stickers will be spreading the message 'Support Free Enterprise' across the campuses of Britain.

Just a few years ago it would have been unthinkable for Conservatives to make such a bold assault on what has traditionally been the stronghold of the Left in this country. But conservatism has recently been making spectacular headway in universities and polytechnics. Membership of student Conservative Associations has increased dramatically—at St Andrews, for example, it rocketed from four hundred to a thousand last year. Two years ago there were only two Conservative sabbatical student union officers. Now there are eighteen, including the union presidents at Oxford, Leeds, Manchester and Leicester Universities and at Trent and Liverpool Polytechnics. Perhaps most remarkable of all, the present executive of the National Unidn of Students contains for the first time ever a lone Conservative within its predominantly Broad Left and International Socialist ranks. The chances are high that by the end of this year he will have been joined by another two Tories.

Part of the reason for this dramatic swing to the Conservatives among students is undoubtedly dissatisfaction with the antics of the extreme Left who dominated student politics during the late 'sixties and early 'seventies. Over the past three years moderates of all kinds have been doing increasingly well in student elections. A group calling itself Students for Representative Politics and campaigning for the NUS to be more responsive to genuine student concerns and less prone to adopt wild ideological stances achieved considerable success in union elections at several universities last year. At Oxford and Cambridge, ANUS, a more irreverent organisation, secured a large number of votes for its programme of providing creches and day care facilities for the Left. The presidency of York University Students' Union, previously the preserve of International Socialists and the International Marxist Group, went in 1974 and 1975 to candidates who stood on a moderate, anti-left platform. This year it has gone to a left-wing Liberal but with the Conservative candidate a very close runner-up.

The Conservatives have gained from this emergence of the silent majority among students. With student Liberal and Labour groups tending to be far to the left of their respective parent parties in the country, the Conservative candidate is often the only choice for those wanting to cast a vote for moderation in union elections. For a long time Conservatives scorned student politics and had a negative attitude to the NUS, often calling for dissafiliation from it. Three years ago, as the move against the left was getting under way, the Federation of Conservative Students decided to change their policy and to involve themselves actively and positively in student affairs locally and in the NUS at the national level. At the NUS conference in 1973 there were less than a dozen Tories present ; this year's conference had 160 Conservative delegates making them the third biggest group in the NUS after the Broad Left and the International Socialists.

The decision of the Federation of Conservative Students to get involved in student politics was a crucial one. At a national level, the Federation now has a positive and attractive policy on the NUS which includes direct election of the Executive by all students, an end to compulsory membership, and making the union properly representative of student grievances and not just a weapon in the Left's battle against the forces of international capitalism. At local level, as Michael Forsyth, this year's chairman of the FCS, puts it, 'Once Conservatives are seen to be concerned about getting hot food served in refectories after 6 p.m. and issues like this that really concern students, we start getting their votes'. This is well illustrated at Oxford University where until three years ago the Conservative Association tended to leave student politics to the lefties while it got on with the more congenial business of drinking and socialising. Since then it has campaigned actively in student union elections with ever-increasing success. This year there are six Conservatives on the nine

man executive of the Oxford University Students' Union—last year there were onlY two. Andrew Elliott, who beat Broad Left and Labour candidates last Easter to become Oxford's first Conservative student union president, reckons that he won because of his appeal as a moderate. This rallying of the moderates may not be the only reason for the headway that Conservatism is currently making among students. Michael Forsyth reckons that ideology could be an equally important factor. He points to the impact made by Sir Keith Joseph who spoke at more than 120 universities, polytechnics and colleges In the last academic year. Everywhere he went his uncompromising intellectual defence of free market economics won an interested and often enthusiastic response from large student audiences. More than fifty people joined the Conservative Association at St Andrews after a debate there between Sir Keith and Steve Parry, then Chairman of the NUS. Forsyth reckons that the conservatives have done well in university and college elections when they have droPPed the defensive, apologetic style of the moderates, and come out as unashamed suPporters of free enterprise and capitalism. 'In doing this,' he says, 'we have produced an argument which is directly opposed to that which has been put to students for years; and when confronted with a choice between socialism and capitalism, many of them prefer capitalism'. Michael Forsyth's belief that the new Josephite ideology of the Conservative Party has helped it to appeal to students would seem to be supported by the fact that he himself is the first right-winger ever to be elected as chairman of the Federation of Conservative Students. He maintains that students are no longer involving themselves in the Tory Reform Group and other leftish Conservative organisations where they have traditionally been active and that there Is a noticeable swing to the right among Conservative students. Andrew Elliott, however, disagrees. He reckons that most Conservative students are still to the left of the

Whatever their exact shade of blue, there is no denying the spectacular gains that conservatism has made among students in the last two or three years. Mrs Thatcher was quite right when she told Der Spiegel last month that the Tories now have the largest, student membership of any established political party in Britain, even though it Is still probably true that more students vote Labour than Tory. The strip cartoon wh1c,11 the FCS are using in their current recruit: ment campaign and which shows a waywar°, student lefty being converted to the path? righteousness apparently solely by the sigh! of a banner inscribed 'I'm Maggie, Try Me_ does seem a trifle over-optimistic. Nonethe less to get beer mats bearing quotations froin Angus Maude into college bars and stic1ers. supporting free enterprise on to students lapels around the country, as the FCS I doing, is in itself quite an achievement.