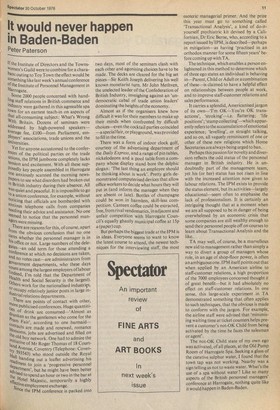 It would never happen

If the Institute of Directors and the Townswomen's Guild were to combine for a charabane outing to Toy Town the effect would be something like last week's annual conference of the Institute of Personnel Management in Harrogate.

Some 2000 people concerned with handling staff relations in British commerce and industry were gathered in this agreeable spa town for an earnest teach-in on aspects of that all-consuming subject : What's Wrong With Britain. Dozens of seminars were addressed by high-powered speakers— average fee, £100—from Parliament, emPloYers' associations, trade unions and the universities.

Yet for anyone accustomed to the conferences of the political parties or the trade onions, the IPM jamboree completely lacks tension and excitement. With all these supPosedly key people assembled in Harrogate °he anxiously scanned the morning newsPapers to see what disorders had broken out in British industry during their absence. All was quiet and peaceful. It is impossible to go to a union conference, for example, without noticing that officials are bombarded with anxious telephone calls from companies needing their advice and assistance. No one seemed to notice that the personnel managers were missing. There are reasons for this, of course, apart Irom the obvious conclusion that no one cares whether the personnel manager is in IS office or not. Large numbers of the delegates—an odd term for those attending a conference at which no decisions are taken, dnd no votes cast—are administrators from government departments, who these days cOunt among the largest employers of labour (Indeed, I'm told that the Department of -Health and Social Security is the largest). uthers work for the nationalised industries, (3.r occupy relatively junior posts in large inaustrial relations departments. There are points of contact with other, ti OrePublicised conferences. Huge quantiti es of drink are consumed—'Almost as oprunken as the gentlemen who come for the crarn Fair', according to one barmaid brtacts are made and renewed, romance th°ssoms, jobs are advertised and filled on .°1(1 boy network. One had to admire the 1-itlative of Mr Roger Thomas of 18 Court t?and Avenue, Coventry (Telephone: Coven ! ,P3543) who stood outside the Royal _all. handing out a leaflet advertising his Ideadiness to join a 'progressive personnel ,,e,Partmene, but he might have been better

ince the IPM conference is packed into two days, most of the seminars clash with each other and agonising choices have to be made. The decks are cleared for the big set pieces—Sir Keith Joseph delivering his well known monetarist turn. Mr John Methven, the unelected leader of the Confederation of British Industry, inveighing against an 'undemocratic cabal of trade union leaders' dominating the heights of the economy. '

Almost as if the organisers knew how difficult it was for their members to make up their minds when confronted by difficult choices—even the cocktail parties coincided —a special fair, or playground, was provided to fill in the time.

There was a form of indoor clock golf, courtesy of the advertising department of the Daily Express, and a range of pin tables, nickelodeons and a pool table from a company whose display stand bore the delphic slogan: 'The last thing an employee should be thinking about is work'. Pretty girls demonstrated computerised devices that allow office workers to decide what hours they will put in (and inform the manager when they are absent or late). Bottles of champagne could be won in harmless, skill-less competition. Canteen coffee could be extracted, free, from rival vendomatics, in adjacent and unfair competition with Harrogate Council's equally ghastly municipal coffee at 15p a (paper) cup.

But perhaps the biggest trade at the IPM is in ideas. Everyone seems to want to know the latest course to attend, the newest techniques for the interviewing staff, the most esoteric managerial primer. And the prize this year must go to something called 'Transactional Analysis', a kind of do-it yourself psychiatric kit devised by a Californian, Dr Eric Berne, who, according to a report issued by IPM, is described—perhaps in mitigation—as having 'practised in an orthodox manner for some fifteen years' before coming up with TA.

The technique, which enables a person enlightened in this method to determine which of three ego states an individual is behaving in—Parent, Child or Adult or a combination of these—is claimed to have a helpful effect on relationships between people at work, and to improve staff-customer relations and sales performance.

It carries a splendid, Americanised jargon of its own—'I'm OK-r--You're OK trans actions', `stroking'—i.e. flattering; 'life positions'; 'stamp collecting'—which apparently refers to the accumulation of emotional experience; 'levelling', or straight talking, and so on, all vaguely reminiscent of one or other of these new religions which Home Secretaries are always being urged to ban.

Perhaps this passion for novelty and diversion reflects the odd status of the personnel manager in British industry. He is undoubtedly part of the management team, yet his (or her) status has not risen in line with the increased attention now given to labour relations. The 1PM exists to provide the status element, but its activities—largely educational—seem often to emphasise the lack of professionalism. It is certainly an intriguing thought that at a moment when we are all supposed to be in danger of being overwhelmed by an economic crisis that some companies are still wealthy enough to send their personnel people off on courses to learn about Transactional Analysis and the like.

TA may well, of course, be a marvellous new aid to management rather than simply a way to divert a group of managers whose role, in an age of shop-floor power, is often an ambiguous one. IPM itself points out that when applied by an American airline to staff-customer relations, a high proportion of the 7000 employees concerned thought it of great benefit—but it had absolutely no effect on staff-customer relations. In one sense, this large-scale experiment in TA demonstrated something that often applies to such techniques, that the obvious is made to conform with the jargon. For example, the airline staff were advised that 'minimising waiting time at ticket counters helps prevent a customer's not-OK Child from being activated by the time he faces the salesman or agent'.

The not-OK Child state of my own ego was activated, of all places, at the Old Pump Room of Harrogate Spa. Seeking a glass of the curative sulphur water, I found that the town tap was not working. Nearby was a sign telling us not to waste water. What's the use of a spa without water? Like so many aspects of the British personnel managers' conference at Harrogate, nothing quite like it would happen in Baden-Baden.