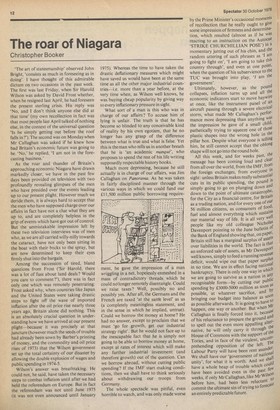 The roar of Niagara

'The art of statesmanship' observed John Bright, 'consists as much in foreseeing as in doing'. I have thought of this admirable dictum on two occasions in the past week.

The first was last Friday, when Sir Harold Wilson was asked by David Frost whether, when he resigned last April, he had foreseen the present sterling crisis. His reply was 'No, and I don't think anyone else did at that time' (my own recollection in fact was that most people last April talked of nothing else, in the context of the universal question 'Is he simply getting out before the roof falls in?'). The second was on Monday when Mr Callaghan was asked if he knew how bad Britain's economic future was going to be. 'No,' he replied, 'I am not in the forecasting business.'

As the roar and thunder of Britain's approaching economic Niagara have drawn markedly closer, we have in the past few days been provided on television with two profoundly revealing glimpses of the men who have presided over the events leading up to our present plight. However much we deride them, it is always hard to accept that the men who have supposed charge over our affairs in fact have not a clue what they are up to, and are completely helpless in the grip of events which have got out of control. But the unmistakable impression left by these two television interviews was of men who, as we are all carried willy-nilly towards the cataract, have not only been sitting in the boat with their backs to the spray, but are now determined to keep their eyes firmly shut into the bargain.

Among the succession of tired, bland questions from Frost (`Sir Harold, there was a lot of fuss about land deals? Would you care to comment ?'), there was in fact only one which was remotely penetrating. Frost asked why, when countries like Japan and the United States were taking drastic steps to fight off the wave of imported inflation after the oil price rise nearly three years ago, Britain alone did nothing. This is an absolutely crucial question in understanding how we have arrived at our present plight—because it was precisely at that juncture (however much the seeds of trouble had already been sown by Barber's printing of money, and the commodity and oil price rises of 1973) that the Wilson government set up the total certainty of our disaster by allowing the double explosion of wages and public spending in 1974-5.

Wilson's answer was breathtaking. He could not, he said, have taken the necessary steps to combat inflation until after we had held the referendum on Europe. But in fact the referendum was not until June 1975 (it was not even announced until January 1975). Whereas the time to have taken the drastic deflationary measures which might have saved us would have been at the same time as all the other major industrial countries—i.e. more than a year before, at the very time when, as Wilson well knows, he was buying cheap popularity by giving way to every inflationary pressure in sight.

What sort of a man is this who was in charge of our affairs? To accuse him of lying is unfair. The truth is that he has become so blinded to any conceivable kind of reality by his own egotism, that he no longer has any grasp of the difference between what is true and what is false. Yet this is the man who tells us in another breath that he is 'an academic manqué', who proposes to spend the rest of his life writing supposedly respectable history books.

Much more depressing, because he still actually is in charge of our affairs, was Jim Callaghan on Panorama. As he was taken in fairly disciplined manner through the various ways in which we could fund our £11,500 million public borrowing require

ment, he gave the impression of a man wriggling in a net, hopelessly enmeshed in a mass of contradictory threads which he could no longer remotely disentangle. Could we raise taxes? Well, possibly no and possibly yes. After all, the Germans and the French are taxed 'at the same level' as us (a completely meaningless statement, and in the sense in which he implied, untrue). Could we borrow the money at home? He had no answer, except to proclaim that we must 'go for growth, get our industrial strategy right'. But he would not face up to the inescapable fact that he is simply not going to be able to borrow money at home, except at rates of interest which will make any further industrial investment (and therefore growth) out of the question. Can we borrow abroad, without cutting public spending? lithe IMF start making conditions, then we shall have to think seriously about withdrawing our troops from Germany.

The whole spectacle was pitiful, even horrible to watch, and was only made worse by the Prime Minister's occasional moments of recollection that he really ought to give

some impression of firmness and determina

tion, which resulted (almost as if he was reacting to an instruction on the Autocue 'STRIKE CHURCHILLIAN POSE') in a momentary jutting out of his chin, and the random uttering of such phrases as 'I am going to fight on', 'I am going to take this country through', and even at one point, when the question of his subservience to the TUC was brought into play, 'I am the government'.

Ultimately, however, as the pound collapses, inflation turns up and all the economic indicators start to move haywire at once, like the instrument panel of an aircraft passing through a severe electrical storm, what made Mr Callaghan's performance more depressing than anything was the impression he gave of a small child, pathetically trying to squeeze one of those plastic shapes into the wrong hole in the pillar box. Despite what everyone is telling him, he still cannot accept that the oblong shape will not go into the round hole. All this week, and for weeks past, the message has been coming loud and clear from allover the world, from the IMF, frorn the foreign exchanges, from everyone .111 sight : unless Britain makes really substantial cuts in its public spending, the pound ts simply going to go on plunging down and down to the point of ultimate catastrophe, for the City as a financial centre, for Britain as a trading nation, and for every one of our 56 million citizens, as consumers of food, fuel and almost everythnig which sustains our material way of life. It is all very wen people like my old colleague Nicholas Davenport pointing to the June bulletin of the Bank of England showing that, on paper, Britain still has a marginal surplus of assets over liabilities in the world. The fact is that an enforced sale of assets, as Mr Davenport well knows, simply to feed a running revenue deficit, would wipe out that paper surplus in no time. We are in effect facing national bankruptcy. There is only one way in which we are going to survive as a nation in artY recognisable form—by cutting our Public spending by £3000-5000 million as goon as possible, at whatever sacrifice, and IV bringing our budget into balance as soon as possible afterwards. It is going to have to happen, one way or another. But when Tvir Callaghan is finally forced into it, because. of his reluctance to prepare the ground and to spell out the even more appalling alternative, he will only carry it through the House of Commons with the support of the Tories, and in face of the virulent, uncotnprehending opposition of the left. The Labour Party will have been rent asunder: We shall have our 'government of nationa! unity', for what it is worth. And we Oat; have a whole heap of trouble which coulo have been avoided even in the past. few weeks, if only Mr Callaghan, like Mr Wilson before him, had been less reluctant t° commit the ultimate sin of trying to forecast an entirely predictable future.