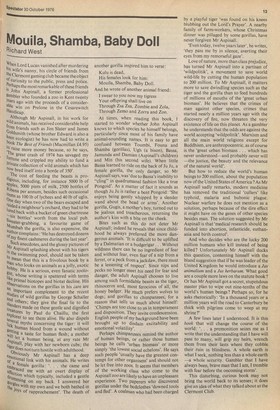 When Lord Lucan vanished after murdering his wife's nanny, his circle of friends from the Clermont gaming club became the object of curiosity to the public, press and police. Perhaps the most remarkable of these friends Is John Aspinall, a former professional gambler who founded a zoo in Kent twenty Years ago with the proceeds of a considerable win on Prelone in the Cesarewitch Handicap. .Although Mr Aspinall, in his work for wild animals, has received considerable help from friends such as Jim Slater and James Goldsmith (whose brother Edward is also a k, cell ecologist) he has now had to write a book The Best of Friends (Macmillan £.4.95) to raise more money because, so he says, The great crash of 1974 has savaged my fortune and crippled my ability to fund a Private collection of wild animals which has now bred itself into a horde of 350'.

The cost of feeding the beasts is prodigious, including, for instance 5000 lb of apples, 5000 pints of milk, 2500 bottles of .111bena per annum, besides such occasional Items as 100 lb of lychees and 40 lb of ugl is. 00e day when two of the bears escaped and raided a neighbour's orchard, they had to be lured back with a bucket of green chartreuse --six bottles' worth from the local pub. Sweater-grabbing, a favourite game of Mumbah the gorilla, is also expensive, the author complains: 'He has destroyed dozens of my finest cashmeres during the last year'. Such anecdotes,.and the glossy pictures of Mr Aspinall splashing about with his tigers In the swimming pool, should not be taken 1° mean that this is a frivolous book by a man who looks on animals as a jolly, exotic hobby He is a serious, even fanatic zooloPt, whose writing is spattered with terms Observations Primal biotopes and biotat decline. His ua°servations on the gorillas in his ,are are 11 IMPortant complement to the recent Studies of wild gorillas by George Schaller and others; they give the final lie to the Slanders made on these gentle and dignified creatures by Paul du Chaillu, the first explorer to see them alive. He also dispels ev,eral myths concerning the tiger: it will r

let( human blood from a wound without setting a taste for human flesh; a mother "ill

a human being, at any rate Mr ‘, spinal!, play with her newborn cubs; the t

'ger does not turn hostile with adulthood.

Obviously Mr Aspinall has a deep emotional link with his animals. He writes O a female gorilla : . . she came and embraced me with an overt display of fection which typically, included a gentle 87111Ming on my back. I answered her th g.les with my own and we both bathed in e Joys of rapprochement'. The death of

another gorilla inspired him to verse: Kulu is dead, His females look for him: Mouila, Shamba, Baby Doll.

And he wrote of another animal friend: I swear to you now my tigress Your offspring shall live on Through Zsa Zsa, Zombie and Zola, Through Zemo and Zorra and Zon.

At times, when reading this book, I started to wonder whether John Aspinall knows to which species he himself belongs, particularly since most of his family have animal-sounding names. It is easy to get confused between Toumbi, Founa and Shamba (gorillas), Ugh (a bison), Bassa, Jamunda and Damian (Aspinall's children) and Min (his second wife). When little Bassa learned to ride on the back of Ju Ju, a female gorilla, the only danger, so Mr Aspinall says, was 'due to Bassa's inability to "cling" in quadrumanal fashion like a true Pongoid'. As a matter of fact it sounds as though Ju Ju is rather a bent Pongoid: 'She enjoys being gently whipped by a slender wand about the head or arms'. Another gorilla, Gugis, a mother's boy, turned out to be jealous and treacherous, returning the author's kiss with a bite on the cheek.

Bites such as this do not deter Mr Aspinall ; indeed he reveals that since childhood he always preferred the more dangerous animals. 'It is difficult to be uplifted by a Dalmatian or a budgerigar. ... Without wildness there can be no ingredient of fear and without fear, even fear of a nip from a ferret, or a peck from a jackdaw, there must be a lessening of respect'. Since nips and pecks no longer meet his need for fear and danger, the adult Aspinall chooses to live among such formidable beasts as the tiger, rhinoceros and, most ferocious of all, the honey badger. He much prefers wolves to dogs; and gorillas to chimpanzees, for a reason that tells us much about himself: 'Chimps are too close to us in temperament and disposition. They invite condescension. English people of my background have been brought up to disdain excitability and emotional volatility'.

Perhaps chimpanzees remind the author of human beings, or rather those human beings he calls 'urban biomass' or more simply 'the lowest social echelons'. He says such people 'usually have the greatest con tempt for other organisms' and should not be let free into zoos. It seems that members of the working class who come to the Aspinall zoo are likely to have an unpleasant experience. Two paperers who discovered gorillas under the bedclothes 'downed tools and fled'. A coalman who had been charged by a playful tiger 'was found on his knees blubbing out the Lord's Prayer'. A nearby family of farm-workers, whose Christmas dinner was pillaged by some gorillas, have never forgiven Mr Aspinall.

'Even today, twelve years later', he writes, 'they pass me by in silence, averting their eyes from my remorseful gaze'.

Love of nature, more than class prejudice, has turned Mr Aspinall into a partisan of `wildpolitik', a movement to save world wild-life by cutting the human population to 200 million. To Mr Aspinall, it matters more to save dwindling species such as the tiger and the gorilla than to feed hundreds of millions of mouths of the 'great urban biomass'. He believes that the crimes of man against other species, crimes that started nearly a million years ago with the discovery of fire, now threaten the very existence of life on this planet. As a gambler he understands that the odds are against the world accepting `wildpolitik'. Marxism and all the main world religions except for Buddhism, are anthropocentric, as of course is the 'great urban biomass . . . which has never understood—and probably never will —the justice, the beauty and the relevance of the natural world'.

But how to reduce the world's human beings to 200 million, about the population now of the United States of America? As Mr Aspinall sadly remarks, modern medicine has removed the traditional 'cullers' like typhoid, malaria and bubonic plague. Nuclear warfare he does not mention as a solution, perhaps because of the dire effect it might have on the genes of other species besides man. The solution suggested by Mr Aspinall is that 'medical research should be funded into abortion, infanticide, euthanasia and birth control'.

And who decides who are the lucky 200 million humans who kill instead of being killed? Unfortunately Mr Aspinall ducks this question, contenting himself with the bland suggestion that if he was leader of the United Kingdom he would introduce a Jus animalium and a Jus herbarum. What good are a couple more laws on the statute book? Or has Mr Aspinall got a secret, stupehdous master plan to wipe out nine-tenths of the world's human beings? Perhaps so, for he asks rhetorically: 'In a thousand years or a million years will the road to Canterbury be thick with pilgrims come to weep at my shrine?'

A few lines later I understood. It is this book that will change the course of the world: `. . . a premonition seizes me as I write that the understanding that I have will pass to many, will grip my heirs, wrench them from their lasts where they cobble their ruin in blindness. A whole earth is what I seek, nothing less than a whole earth —a whole security. Gambler that I have always been, brave man that I am, I tremble with fear before the oncoming storm'.

This disturbing, curious book may not bring the world back to its senses; it does give an idea of what they talked about at the Clermont Club.