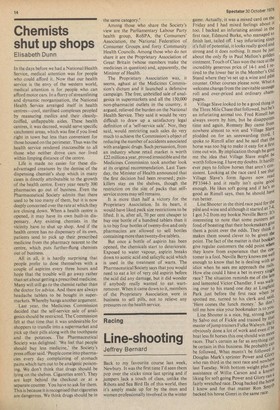 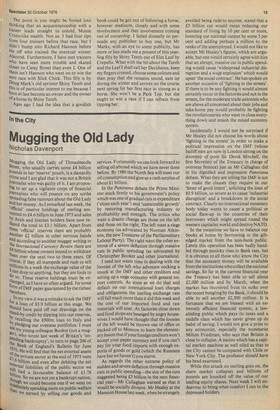 Back to my favourite course last week, Newbury. It was the first time I'd seen them pop over the sticks since last spring and if jumpers lack a touch of class, unlike the Ribots and Sea Bird [Is of this world, then it's amply made up for by the men and women professionally involved in the winter

game. Actually, it was a mixed card on the Friday and I had mixed feelings about it too. I backed an infuriating animal in the first race, Edmund Burke, who managed to

finish last, tailed off. I say infuriating since it's full of potential, it looks really good and

strong and it does nothing. It must be just about the only fly in Paul Mellon's golden ointment. Touch of Class won the race at the incredibly generous price of 14-1 and I retired to the lower bar in the Member's Old Stand where they've set up a wine and pate counter. Other courses please note. What a welcome change from the inevitable sausage roll and over-priced and ordinary cham pagne. • Village Slave looked to be a good thing in the Three Mile Chase that followed, but he's an infuriating animal too. Fred Rimell has always sworn by him, but he disappoints time and again. Romany Bay came from nowhere almost to win and Village Slave plodded on for an unrewarding third. 1 spoke to Rimell after and he said that the horse was too big to make it easy for a first time out win. By implication though he gave me the idea that Village Slave might be worth following. I have my doubts. It hardlY ever pays to follow horses that aren't consistent. Looking at the race card I see that Village Slave's form figures now read PF3344-3 and it really isn't quite gond enough. He likes soft going and if he's as good as Rimell says, then he should have run better.

Line Shooter in the third race paid for the pate and wine and although it started at 7-4' I got 5-2 from my bookie Neville Berry. It's interesting to note that some punters are fond of boasting that their bookmakers give them a point over the odds. They think it makes them sound clever to be given the point. The fact of the matter is that bookies give regular customers the odd point When they know from experience that the cos; tomer is a fool. Neville Berry knows me well enough to know that he is dealing with an idiot when he sees me approach the rails. How else could I have a bet in every single race ? The situation reminds me of the late and lamented Victor Chandler. I was walk; ing over to his stand one day at Lingfielu Park just before the first race when he

spotted me, turned to his clerk and said; 'Here comes the lunch money.' So don t

tell me how nice your bookmaker is to Y°ti' Line Shooter is a nice, big, strong h°rset by Salvo out of Fickle and trained by tha,d master ofjump trainers Fulke Walwyn. He obviously done a lot of work and even it.° beat less fit horses this one should win more races. That's certain as far as anything Can be certain in this business. He probably ean be followed, What mustn't be followed Douglas Mark's sprinter Power and Gin° who ran third in the next race and nowheree last Tuesday. With bottom weight Plus lb.,

fairly wretched race. Doug backed the hors! I know and for that matter Ron SmYta backed his horse Gimri in the same race.

The point is you might be fooled into thinking that an acquaintanceship with a trainer leads straight to untold, Monte Cristo-like wealth. Not so. I had four tips from four trainers before that race, but I didn't bump into Richard Hannon before the off who trained the eventual winner Alanrod. Furthermore, I have met trainers Who have seen more trouble and skated Closer to Carey Street than even 1. One of them isn't Hannon who went on to win the next race with Slick Chick. This filly is by Doug Mark's old sprinter Shiny Tenth and this is of particular interest to me because 1 hive at last become an owner and the owner of a horse by Shiny Tenth.

Ages ago I had the idea that a goodish book could be got out of following a horse, however mediocre, closely and with some involvement and that involvement coming out of ownership. I failed dismally to persuade any publisher to buy one, but Mr Marks, with an eye to some publicity, has more or less made me a present of this yearling filly by Shiny Tenth out of Elm Leaf by Crepello. What with the bit about the Tenth and the Leaf! shall call her Deciduous, keep my fingers crossed, choose some colours and then pray that she remains sound, eats up during the winter and arrives on the course next spring for her first race as strong as a horse. She won't be a Park Top, but she ought to win a race if I can refrain from tipping her.