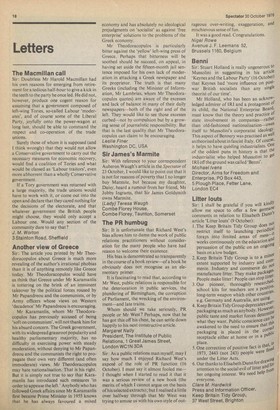 Sir: Doubtless Mr Harold Macmillan had his own reasons for emerging from retirement for a tedious half-hour to give a kick in the teeth to the party he once led. He did not, however, produce one cogent reason for assuming that a government composed of left-wing Tories, so-called Labour 'moderates', and of course some of the Liberal Party, joyfully onto the power-wagon at long last, should be able to command the respect and co-operation of the trade unions.

If a Tory government was returned with a large majority, the trade unions would have to work with it, or come out into the open and declare that they cared nothing for the decisions of the electorate, and that whatever government the British people might choose, they would only accept a Labour one. Would any section of the community dare to say that ?