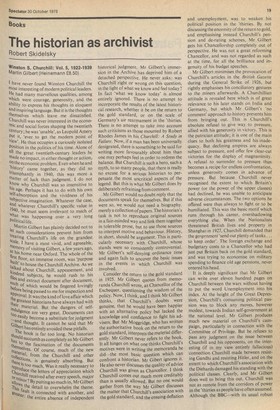 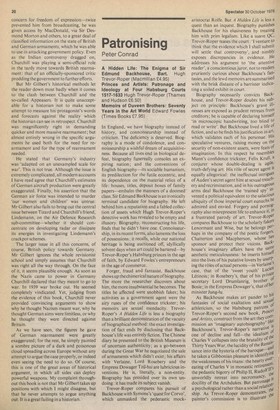 The historian as archivist

have never found Winston Churchill the most interesting of modern political leaders. He had many marvellous qualities, among which were courage, generosity, and the ability to express his thoughts in eloquent and inspiring language. But it is the thoughts themselves which leave me dissatisfied. Churchill was never interested in the economic and social forces shaping the twentieth century; he was 'unable', as Leopold Amery Put it, `ever to get the modern point of view'. He thus occupies a curiously isolated Position in the politics of his time. Alone of all the great twentieth-century leaders he made no impact, in either thought or action, on the economic problem. Even when he and 'history' came together, as they did so triumphantly in 1940, this was more a matter of luck than judgment. 1 do not Lknow why Churchill was so insensitive to nis age. Perhaps it has to do with his own sell.-absorption and the vividness of his subjective imagination. Whatever the case, and whatever Churchill's specific value in 940, he must seem irrelevant to much of What was happening over a very long Political life. , Martin Gilbert has plainly decided not to let such considerations prevent him from treating Churchill's life on the grandest scale. I have a most vivid, and agreeable, Memory of visiting Gilbert, a few years ago, at his home near Oxford. The whole of the trstfloor, an immense room, was 'purpose uilt to house the Churchill Archive. As we l.a.lked about Churchill, appeasement, and ,kirldred subjects, he would rush to his flies and extract document after document, ebaeeh of which would be fingered lovingly

fore being passed to me for inspection and dtpproval. It was the kind of love affair which the greatest historians have always had with

ill* material. But the dangers of self

tridulgence are very great. Documents can

easily become a substitute for judgment

thought. It cannot be said that Mr `Jilbert has entirely avoided these pitfalls.

„, the book is far too long. No historian 'hnaould succumb as completely as Mr Gilbert th.‘s t° the fascination of the documents eMo r nt e rs ei al vl es. Of course, much of the new , from the Churchill and other thens, is genuinely absorbing. But re„re is too much. Was it really necessary to Produce the letters of appreciation which received after every speech, major atiollin°r? BY putting so much in, Mr Gilbert TL..'us -s the detail to overwhelm the theme. D, ea,„fault is connected with another, and r. the entire absence of independent

historical judgment. Mr Gilbert's immersion in the Archive has deprived him of a detached perspective. He never asks: was Churchill right or wrong on this question, in the light of what we know and feel today? In fact 'what we know today' is almost entirely ignored. There is no attempt to incorporate the results of the latest historical research, whether it be on the return to the gold standard, or on the scale of Germany's air rearmament in the 'thirties. There is no attempt to take into account such criticisms as those mounted by Robert Rhodes James in his Churchill: A Study in Failure. Now, if a man has been universally denigrated, there is something to be said for writing more favourably about him than one may perhaps feel in order to redress the balance. But Churchill is such a hero, such a myth, to so many people, that there is really no excuse for a serious historian to perpetuate the most uncritical aspects of the legend. But this is what Mr Gilbert does by deliberately refraining from comment.

Mr Gilbert would no doubt reply that the documents speak for themselves. But if this were so, we would not need a biography. merely a collection of papers. The historian's task is not to reproduce original sources in a fair-minded way and link them together in tolerable prose, but to use those sources to interpret motive and behaviour. History, in short, should be argument. This is particularly necessary with Churchill, whose stands were so consistently controversial. Mr Gilbert's self-denying ordinance time and again fails to uncover the basic issues in the events in which Churchill was involved.

Consider the return to the gold standard in 1925. Mr Gilbert quotes from memoranda Churchill wrote, as Chancellor of the Exchequer, questioning the wisdom of the policy. Now, I think, and [think Mr Gilbert thinks, that Churchill's doubts were genuine, that he would have been happier with an alternative policy but lacked the knowledge and confidence to fight his advisers. But Mr Moggridge, who has written the authoritative book on the return to the gold standard, interprets the material differently. Mr Gilbert never refers to the book. It all hinges on what one thinks Churchill's motives were in writing the memoranda he did-the most basic question which can confront a historian. Mr Gibert ignores it. He also never discusses the quality of advice Churchill was given as Chancellor. I think Churchill comes out much more creditably than is usually allowed. But no one would gather from the way Mr Gilbert discusses the matter that Churchill's association with the gold standard, and the ensuing deflation

and unemployment, was to weaken his political position in the 'thirties. By not discussing the enormity of the return to gold, and emphasising instead Churchill's pension and de-rating schemes, Mr Gilbert gels his Chancellorship completely out of perspective. He was not a great reforming Chancellor, and was not regarded as such at the time, for all the brilliance and ingenuity of his budget speeches.

Mr Gilbert minimises the provocation of Churchill's articles in the British Gazette during the General Strike of 1926, but rightly emphasises his conciliatory gestures to the miners afterwards. A Churchillian attitude is revealed here which is of great relevance to his later stands on India and Germany, but which Mr Gilbert's 'no comment' approach to history prevents him from bringing out. This is Churchill's absolute refusal to give way to pressure, allied with his generosity in victory. This is the patrician attitude; it is one of the main clues to both his greatness and his inadequacy. But declining empires are always subject to pressure, and offer few clear-cut victories for the display of magnanimity. A refusal to surrender to pressure thus becomes a recipe for endless confrontation, unless generosity comes in advance of pressure. But because Churchill never recognised the extent to which Britain's power (or the power of the upper classes) had declined, he was unable to anticipate adverse circumstances. The two options he offered were thus always to fight or to be humiliated. This was the basic motif which runs through his career, overshadowing everything else. When the Nationalists threatened British lives and property in Shanghai in 1927, Churchill demanded that the goxernment 'send out plenty of tanks ... to keep order'. The foreign exchange and budgetary costs to a Chancellor who had just put Britain back on the gold standard, and was trying to economise on military spending to finance old age pensions, never entered his head.

It is deeply significant that Mr Gilbert can write over eleven hundred pages on Churchill between the wars without having to put the word Unemployment into his index. At the height of the Great Depression, Churchill's consuming political passion was to block any moves, however modest, towards Indian self-government at the national level. Mr Gilbert produces much new material on Churchill's campaign, particularly in connection with the Committee of Privilege. But he refuses to pass any judgment on the issue between Churchill and his opponents, on the interesting (if in my view entirely fallacious) connection Churchill made between resisting Gandhi and resisting Hitler, and on the extent to which Churchill's association with the Diehards damaged his standing with the political classes. Clearly, and Mr Gilbert does well to bring this out, Churchill was not as remote from the corridors of power in the 'thirties as people have often assumed. Although the BBC—with its usual robust concern for freedom of expression—twice prevented him from broadcasting, he was given access by MacDonald, via Sir Desmond Morton and others, to a great deal of classified information on the state of British and German armaments, which he was able to use in attacking government policy. Even as the Indian controversy dragged on, Churchill was playing a semi-official role in the tardy move towards British rearmament: that of an officially-sponsored critic prodding the government to further efforts.

But Mr Gilbert's historical methods let the reader down most badly when it comes to the clash between Churchill and the so-called Appeasers. It is quite unacceptable for a historian not to make some attempt to measure his protagonist's words and forecasts against the reality which the historian can see in retrospect. Churchill was magnificently right in demanding quicker and more massive rearmament; but almost entirely wrong in the specific arguments he used both for the need for rearmament and for the type of rearmament needed.

He stated that Germany's industry was 'adapted on an unexampled scale for war'. This is not true. Although the issue is extremely complicated, all modern accounts have read agree that Churchill's estimates of German aircraft production were greatly exaggerated. Finally, his assertion that the German air force was intended to murder 'our women and children' was untrue. Mr Gilbert also fails to bring out the central issue between Tizard and Churchill's friend, Lindemann, on the Air Defence Research sub-committee—whether it should concentrate on developing radar or dissipate its energies in investigating Lindemann's crackpot schemes.

The larger issue in all this concerns, of course, British policy towards Germany. Mr Gilbert ignores the whole revisionist school and simply assumes that Churchill was right all the way through. On the face of it, it seems plausible enough. As soon as the Nazis came to power in Germany Churchill declared that they meant to go to war. In 1939 war broke out. He seemed completely vindicated. Yet, judging from the evidence of this book, Churchill never provided convincing arguments to show why he thought Nazism meant war, why he thought German aims were limitless, or why he thought they were directed against Britain.

As we have seen, the figures he gave of German rearmament were greatly exaggerated; for the rest, he simply painted a sombre picture of a dark and poisonous cloud spreading across Europe without any attempt to argue the case properly, or indeed even seeing the need to do so. Of course, this is one of the great areas of historical argument, in which all sides can deploy powerful weapons. My complaint throughout this book is not that Mr Gilbert takes up positions with which I might disagree, but that he never attempts to argue anything out. It is a great failing in a historian.