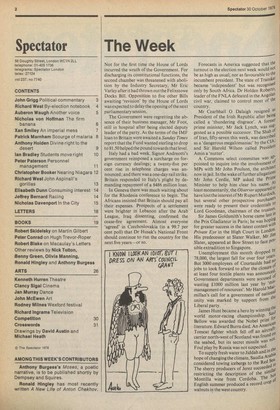 Not for the first time the House of Lords incurred the wrath of the Government. For discharging its constitutional functions, the second chamber was threatened with abolition by the Industry Secretary, Mr Eric Varley after it had thrown out the Felixstowe Docks Bill. Opposition to five other Bills awaiting 'revision' by the House of Lords was expected to delay the opening of the next parliamentary session.

The Government were regretting the absence of their business manager, Mr Foot, still in hospital after being elected deputy leader of the party. As the terms of the IMF loan to Britain were awaited a Sunday Times report that the Fund wanted sterling to drop to 81.50 helped the pound towards that level.

Italy had a bad week. Signor Andreotti's government reimposed a surcharge on foreign currency dealings; a twenty-five per cent rise in telephone charges was announced; and there was a one-day rail strike. Britain responded to Italy's plight by demanding repayment of a 8486 million loan.

In Geneva there was much waiting about for the Rhodesia conference to begin. The Africans insisted that Britain should pay all their expenses. Prospects of a settlement were brighter in Lebanon after the Arab League, Iraq dissenting, confirmed the cease-fire agreement. Almost everyone 'agreed' in Czechoslovakia (in a 99.7 per cent poll) that Dr Husak's National Front should continue to run the country for the next five years—or so. Forecasts in America suggested that the turnout in the election next week would not be as high as usual, nor as favourable to the incumbent president. The state of Transkel became 'independent' but was recognised only by South Africa. Dr Holden Roberto, leader of the FNLA defeated in the Angolan civil war, claimed to control most of the country. Mr Cearbhall 0 Dalaigh resigned as President of the Irish Republic after being called a 'thundering disgrace'. A former prime minister, Mr Jack Lynch, was gig; gested as a possible successor. The Shah 01 of Iran, fifty-seven this week, was described as a 'dangerous megalomaniac' by the CIA; and Sir Harold Wilson called President Amin a 'nutter'.

A Commons select committee was ar pointed to inquire into the involvement of MPs with Mr John Poulson, the architect now in jail. In the wake of further allegations Mr John Cordle, MP asked the Prirne Minister to help him clear his name. At least momentarily, the Observer appeared to have lost the interest of Mr Rupert Murdoch, but several other prospective purchasers were ready to present their credentials t° Lord Goodman, chairman of the trusteCs. Sir James Goldsmith's horse came last In the Prix Gladiateur in Paris; he was hoPi.ng for greater success in the latest contest with Private Eye in the High Court in Londnn. His predecessor at Slater Walker, Mr ii Slater, appeared at Bow Street to face P°ssible extradition to Singapore. Unemployment this month dropped bY 78,000, the largest fall for over four Years' But 3000 employees of Courtaulds had jobs to look forward to after the closure 0' at least four textile plants was announcea;. Government departments were accused !:)1 wasting £.1000 million last year by 'MI5: management of resources'. Mr Harold WC, millan's call for a government of nationa' unity was marked by support from the Liberal party. James Hunt became a hero by winning he James world motor-racing championship. S„ Bellow was awarded the Nobel prize. 10 literature. Edward Burra died. An Americaiti Tomcat fighter which fell off an aircrafn carrier north-west of Scotland was found °, the seabed, but its secret missile was 1101' Foul play by Russia was not suspected To supply fresh water to Jiddah and in t% hope of changing the climate, Saudia Aral/13 considered towing icebergs to the Red The sherry producers of Jerez succeeded..1, restricting the description of the surlda't Montilla wine from Cordoba. The "fo English summer produced a record croP walnuts in the west country.