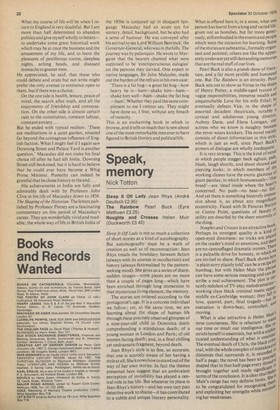 Sleep It Off Lady is not so much a collection of short stories as a kind of autobiography. But autobiography must be a work of creation as well as of reconstruction: Jean Rhys treads the boundary between fiction (always with its sources in recollection) and history (always fictionalised by the patternseeking mind). She gives us a series of sharp, sudden images—some pieces are no more than a couple of pages long—which have been enriched through long immersion in that mysterious living element, the memory.

The stories are ordered according to the protagonist's age. It is a concrete individual we follow; yet, at the same time, we are learning about the shape of human life through these precisely observed glimpses of a nine-year-old child in Dominica dimly comprehending a scandalous death; of a young woman in London and Paris; of old women facing death; and, in a final chilling yet undramatic fragment, beyond death.

Jean Rhys's style is so fine, so accurate, that one is scarcely aware of her having a styleat all. She knows.how to stand out of the way of her own stories. In fact the themes presented here suggest that an ambivalent perception of invisibility has played a central role in her life. But whatever its place in Jean Rhys's history—and her own tact puts detective work to shame—it has contributed to a subtle and unique literary personality.

Spectator 30 October 1976 What is offered here is, in a sense, what one person has learnt from a long and varied life: given not as homilies, but far more generously, still embodied in the events and people which were the occasion for learning. Some of the stories are substantia:, formally organised and pointed; others are like the apparently irrelevant yet still demanding memories that are the real stuff of our lives.

Pearl Buck is also a grande dame of literature, and a far more prolific and honoured one. But The Rainbow is an atrocity. Pearl Buck sets out to show us Virtue in the shape of Henry Potter, a middle-aged tycoon of vague responsibilities, immense wealth and unquenchable Love for his wife Ethel; he eventually defeats Vice, in the shape assorted decadent theatricals, notably 3 cynical and adulterous young director, Aubrey Dane, and Elena Lonigan, star actress who we know is naughty because she never wears knickers. The novel mainlY consists of direct information in this style; which is just as well, since Pearl Buck s powers of dialogue are wholly inadequate. It is very strange. This is the kind of novel in which people stagger back aghast, Pale,' blush, laugh shortly, and shoot shrewd ana piercing looks; in which members of the, working classes have the exotic glamour 01 giant pandas; in which homosexuals—'t breed' are 'dead inside where the heart,s concerned. No push--no heat—no fire And yet there is something bizarrely imPres, sive about it, as about any magoificen' eccentricity. Faced with St Pancras Station or Centre Point, questions of beauty drt. utility are dwarfed by the sheer enormitY ° the thing. Noughts and Crosses is an attractive b000f k. Perhaps its strongest quality is a kin d • d open-eyed directness: no tricks are PlaYe on the reader's mind or emotions, and the" are no camouflaged dramatic ironies. .There. is a palpable drive for honesty, in which are invited to share. Pearl Buck shows hr° r 'a plain story plainly told' can be a reciPel°5e humbug; but with Helen Muir the Olt, can have some serious meaning and can u'r, scribe a real achievement. The plot is. tainly redolent of TV-play melodramatics re working class black criminal meets Orin middle ex-Cambridge woman; they fal its love, quarrel, part; final tragedy—but rid execution is down-beat, controlled, 3 moving.

What is also attractive is Helen •

(VIte terse conciseness. She is reluctant to Osre., our time or insult our intelligence. Sile,.;s, stricts herself to essentials, but with a soPtDia' ticated understanding of what is essen , The eventual death of Chris, the black CT:d inal, with the whole complex of mistakes fl distances that surrounds it, is recordea half a page; the novel has been so PreciScejli)5 shaped that in that half-page every.threa, in brought together and made signifieaniv terms of the conclusion. It is clear that He' ;5 Muir's range has very definite limits. She' the°. to be congratulated forrecognising,is, and exploiting her strengths while mInl"' ing her weaknesses.