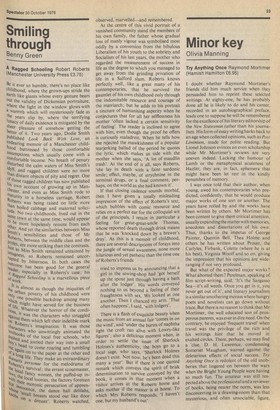 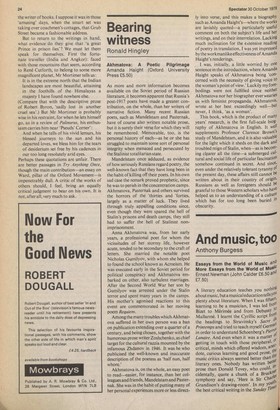 I doubt whether Raymond Mortimer's friends did him much service when they persuaded him to reprint these selected writings. At eighty-one, he has probably done all he is likely to do and his career, recorded in an autobiographical preface, leads one to suppose he will be remembered for the excellence of his literary editorship of the Nev Statesman rather than his journalism. His form of essay writing harks back to an age when collected opinions, such as Post Liminium, made for polite reading. But Lionel Johnson evinces an even scholarship while Mr Mortimer's reviews are very uneven indeed. Lacking the humour of Lamb or the metaphysical acuteness of Hazlitt, they are, in fact, ephemera that might have been let rest in the kindly penumbra of memory.

I was once told that their author, when young, awed his contemporaries who predicted, confidently, that he would produce major works of one sort or another. The years have rolled by and the works have been written by others. Mr Mortimer has been content to give them critical attention, usually expanding the matter with memories, anecdotes and dissertations of his own. Thus, thanks to the impetus of George Painter, Quentin Bell, Thea Holme and others he has written about Proust, the Carlyles, Firbank, Colette (where he is at his best), Virginia Woolf and so on, giving the impression that his opinions are wideranging if not very profound.

But what of the expected major works? What aborted them? Perelman, speaking of film script-writing, said, 'It's the Sargasso Sea—it's all weeds. Once you get in it, you never get out of it', and literary journalism is a similar smothering morass where hungry poets and novelists can go down without trace. But there is no reason to think that Mr Mortimer, the well educated son of prosperous parents, was ever in dire need. On the contrary, he enjoyed 'frequent travel' when travel was the privilege of the rich and his writings hint that he moved in exalted circles. There, perhaps, we may find a 'clue. D. H. Lawrence, condemning Somerset Maugham, warned against the deleterious effects of social success. Try Anything Once is redolent of the old snobberies that lingered on between the wars when the Bright Young People were having so much fun. The amateur was still respected above the professional and a reviewer of books, being nearer the norm, was less disconcerting in a drawing-room than that mysterious, and often unsociable, figure,

the writer of books. I suppose it was in those 'amusing' days, when the smart set was taking over coachmen's cottages, that Grub Street became a fashionable address.

But to return to the writings in hand, what evidence do they give that 'a great Prince in prison lies'? We must let them speak for themselves. First the fortunate traveller (India and Angkor): faced with those mountains that seem, according to Rene Cutforth, to belong to some more magnificent planet, Mr Mortimer tells us: It is in the extreme north that the Indian landscapes are most beautiful, attaining in the foothills of the Himalayas a majesty I have found nowhere else.

(Compare that with the descriptive prose of Robert Byron, 'sadly lost in another cruel sea'.) But Mr Mortimer is probably wise in his restraint, for when he lets himself go, as in a review of Palinurus, his enthusiasm carries him near 'Pseuds' Corner': And when he tells of his vivid lemurs, his blessed journeys to the sun and his departed loves, we bless him for the tears of desiderium set free by his cadences in our too long resolutely arid eyes.

Perhaps these quotations are unfair. There are better passages in Try Anything Once, though the main contribution—an essay on Ward, pillar of the Oxford Movement—is impenetrably dull. A critic of the works of others should, I feel, bring an equally critical judgment to bear on his own. It is not, after all, very much to ask.