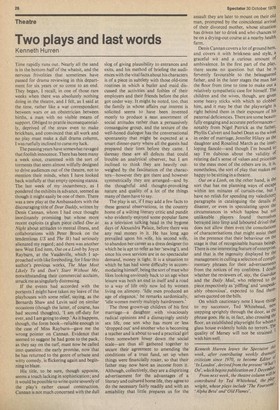 Time rapidly runs out. Nearly all the sand is in the bottom half of the whatsit, and the nervous frivolities that sometimes have passed for drama reviewing in this department for six years or so come to an end. They began, I recall, in one of those rare weeks when there was absolutely nothing doing in the theatre, and I felt, as I said at the time, rather like a war correspondent between wars or an obstetrician between births, a man with no visible means of support. Obliged to prattle inconsequentially, deprived of the straw even to make brickbats, and convinced that all work and no play must make a dull drama column, I was ruefully inclined to curse my luck.

The passing years have somewhat ravaged that foolish innocence. There has been many a week since, crammed with the sort of torments that seem almost wilfully designed to drive audiences out of the theatre, not to mention their minds, when I have looked back wistfully at that empty opening stanza. The last week of my incumbency, as I pondered the exhibits in advance, seemed as though it might easily be one of them. There was a new play at the Ambassadors with the discouraging title of Dear Daddy, written by Denis Cannan, whom I had once thought inordinately promising but whose more recent exploits (a glum piece called One at Night about attitudes to mental illness, and collaborations with Peter Brook on the tendentious US and The lk) had seriously alienated my regard; and there was another new West End item, Out on a Limb by Joyce Rayburn, at the Vaudeville, which I approached with like foreboding, for I fear this author's previous works, The Man Most Likely To and Don't Start Without Me, notwithstanding their commercial acclaim, struck me as singularly distressing.

If the events had accorded with the portents I might have taken my leave of the playhouses with some relief, saying, as the Bernards Shaw and Levin said on similar occasions (though the latter, of course, has had second thoughts), 'I am off-duty for ever, and Lam going to sleep.' As it happens, though, the form book—reliable enough in the case of Miss Rayburn—gave me the wrong pointer on Cannan. Evidence that seemed to suggest he had gone to the pack, as they say on the turf, must now be called into question: the early promise, now that he has returned to the genre of urbane and witty comedy, is flickering again and beginning to blaze.

His title, to be sure, though apposite, seems a touch lacking in sophistication; and it would be possible to write quite severely of the play's rather casual construction. Carman is not much concerned with the dull slog of giving plausibility to entrances and exits, and his method of briefing the audiences with the vital facts about his characters is of a piece in subtlety with those old-time routines in which a butler and maid discussed the activities and foibles of their employers and their friends before the plot got under way. It might be noted, too, that the family in whose affairs our interest is solicited seems to have been invented mostly to produce a neat assortment of social attitudes rather than a persuasively consanguine group, and the texture of the well-honed dialogue has the conversational spontaneity that might be expected at a smart dinner-party where all the guests had prepared their lines before they came. I daresay these are all defects that could trouble an analytical observer, but I am inclined to think they are heavily outweighed by the fascination of the characters—however they got there and however symmetrically they are arranged—and by the thoughtful and thought-provoking nature and quality of a lot of the things many of them have to say.

The play is set, if I may add a few facts to these general observations, in the country home of a wilting literary critic and pundit who evidently enjoyed some popular fame as a television talking head in the bygone days of Alexandra Palace, before there was any real money in it. He has long ago prevailed upon his wife, his second wife, to abandon her career as a dress designer (to which he is apt to refer as her `sewing'), and since his own services are in no spectacular demand, money is tight. It is a situation to which he has had some difficulty in accommodating himself, being the sort of man who likes looking enviously back to an age when leisure was both an end in itself and a road to a way of life only now led by women living on alimony. 'Idle men produced an age of elegance,' he remarks sardonically, 'idle women merely multiply hairdressers.'

The three grown-up children of his first marriage--a daughter with vivaciously radical opinions and a dismayingly untidy sex life, one son who has more or less 'dropped out' and another who is becoming a teacher and is about to wed a practical girl from somewhere lower down the social scale—are thus all gathered together to secure their agreement to amending the conditions of a trust fund, set up when things were financially rosier, so that their father may now have an income from it. Although, collectively, they are a dispiriting advertisement for the advantages of a literary and cultured home life, they agree to do the necessary fairly readily and with an amiability that little prepares us for the assault they are later to mount on their old man, prompted by the coincidental arrival of their divorced mother, whose situation has driven her to drink and who chances to be on a drying-out course at a nearby health farm.

Denis Cannan covers a lot of ground here, and covers it with briskness and style, a graceful wit and a curious amount of ambivalence. In the first part of the play, there seems no question but that he is fervently favourable to the beleaguered father, and in the later stages the man has the floor from time to time to make out a relatively sympathetic case for himself. The children and the wives, though, are given some heavy sticks with which to clobber him, and it may be that the playwright Is right behind them in their exposure of his paternal deficiencies. There are some beaurifully engaging and accurate performances– notably from Nigel Patrick as the father: Phyllis Calvert and Isabel Dean as the wives in order of marriage, Jennifer Hilary as the daughter and Rosalind March as the interloping fiancée—and though I'm bound to say I'm dubious about the validity of relating dad's sense of values and priorities to the mess most of the others are in, it is, nonetheless, the sort of play that makes trie happy to be sitting in a theatre.

Out on a Limb, on the other hand, is the sort that has me planning ways of escape within ten minutes of curtain-rise, but I have no relish for spending my valedictory paragraphs in cataloguing the details of disaster, or even in speculating upon the circumstances in which hapless but ntlt unlikeable players found themselves betrayed into limp and laboured drivel that does not allow them even the consolations of characterisations that might assist theth in the pretence that their behaviour on the stage is that of recognisable human beings' There is one interesting feature of enterprise, and that is the ingenuity displayed by the management in culling a selection of comPbmentary phrases for their advertisements from the notices of my confreres. I doubt whether the reviewers of, say, the Guardian and the Daily Mail, who referred to the piece respectively as 'piffling' and 'unspealc. ably obnoxious', expected to find they selves quoted on the bills. On which cautionary note [leave things to my successor, Ted Whitehead, nog/ stepping sprightly through the door, as the phrase goes. He is, in fact, also crossing the floor, an established playwright for who113 glass house evidently holds no terrors. The, quality of Mersey will not be strained. wish him well.

Kenneth Hurren leaves the Spectator thi:s week, after contributing weekly dramatn; criticism since 1970, to become Editor 01 'In London', derived from the present 'WW1 s On', which begins publication on 3 December. From next week, the theatre column will!" contributed by Ted Whitehead, the PIO,' wright, whose plays include 'The Foursorne ' 'Alpha Beta' and'Old Flames'.