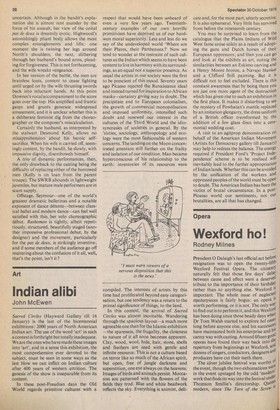 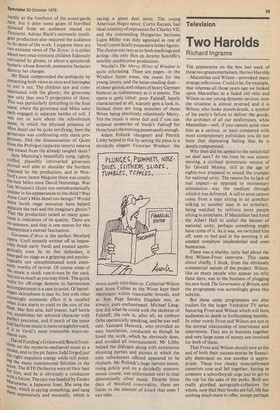 President 0 Dalaigh's last official act before resignation was to open the twenty-fifth Wexford Festival Opera. The citizenry naturally felt that those few days' dela); between cause and effect were a deserved tribute to the importance of their birthday rather than to anything else. Wexford is important. The whole issue of neglected masterpieces is fairly bogus: an opera is worth performing, or it is not. The only waY to find out is to perform it, and this Wexford has been doing since those heady days whell Dr Tom Walsh started to explore bel long before anyone else, and his successors have maintained both his enterprise and hids canny way with casting. Around fifteen go° operas have found their way back into thde repertory from beginnings at Wexford, all, dozens of singers, conductors, designers an' producers have cut their teeth there. The silver jubilee festival was worthY °f the event, though the two exhumations Were, in the event upstaged by the odd `moderri, work that finds its way into the festival uncle' Thomson Smillie's directorship. Qu04e! modern, since The Turn of the Screw "

hardly at the forefront of the avant-garde here, but it drew some gasps of horrified disbelief from an audience reared on Donizetti. Adrian Slack's extremely intelligent production also required the audience to do most of the work. [suppose there are two extreme views of The Screw; it is either about two once-innocent children hideously corrupted by ghosts, or about a spinsterish hysteric whose feverish, possessive fantasies destroy her charges.

Mr Slack compounded the ambiguity by Presenting both views at once and leavingcs to sort it out. The children saw and communicated with the ghosts; the governess saw only (her own ?) projections of them. This was particularly disturbing in the final scene, where the governess and Miles were each engaged in separate battles of will. I was not so sure about the schoolroom scene, in which the physical presence of Miss Jessel can be quite terrifying; here the governess was confronting only static proJections. Did the disassociation of Quint from the Prologue (separate tenors) remove one strand from the already tangled skein ?

Jane Manning's beautifully sung, tightly coiffed, plausibly introverted governess proved well able to shoulder the burdens IMPosed by the production, and in Wexford's own James Maguire there was simply the best Miles since David Hemmings. Was Lee Winston's Quint too melodramatically sinister in his appearances to the child? Was Anne Cant's Miss Jessel too benign? Would more lavish stage resources have helped seParate the real and the imaginary ghosts? .'hat the production raised so many questions is indication of its quality. There are no answers, and that is one reason for this Masterpiece's eternal fascination.

Giovanna d' Arco is the perfect Wexford opera. Until recently written off as impossibly brash early Verdi and treated apologetically even by its few defenders, it emerged on stage as a gripping and psychologically not unsophisticated work eminently worthy of revival. Of course some of t,ne music is stock rum-ti-turn by the yard, nut not as much as you may think. The quick waltz for off-stage demons to harmonium accompaniment is a case in point. Of barrelorgan skittishness it may be, but with what stunningly economic effect it is recalled when Joan starts to yield to the sins of the flesh. Her first aria, half prayer, half battle erY, establishes her schizoid character with Perfect precision, and if much of the tenor and baritone music is more straightforward, it is in Verdi's most irresistible heart-onsleeve vein. David Fielding's Grunewald/Bosch frontcloth set the mysterio-mediaeval scene at a s,,tr°ke, and in the pit James Judd forged just .'ne right impulsive energy while still pointing the many instrumental felicities in the ;Core. The RTE Orchestra were at their best Or him, and he is obviously a conductor wraith a future. The cast was headed by Emiko aruYama, a Japanese Joan. She sang the tkntes, which is saying something, and sang "ern expressively and musically, which is

saying a great deal more. The young American Negro tenor, Curtis Rayam, had ideal intensity of expression for Charles VII, and the outstanding Hungarian baritone Lajos Miller was duly agonised as one of Verdi's most fatally possessive father figures. The chorus was lazy as to both markings and acting—the only blot on Jeremy Sutcliffe's sensibly unobtrusive production.

Nicolai's The Merry Wives of Windsor is quite infuriating. There are pages—in the Windsor forest scene, the music for the young lovers, and the letter-reading duet— of sheer genius, and others of heavy German humour as rudimentary as it is emetic. The opera is aptly titled: poor Falstaff, barely characterised at all, scarcely gets a look in. Instead there are long stretches of those Wives being absolutely relentlessly Merry. Yet the music is never dull and if you can suspend memories of Verdi's Falstaff for three hours the evening passes easily enough.

Adam Pollock (designer) and Patrick Libby helped in this by setting the piece in a decidedly elegant Victorian Windsor: the

music surely told them to. Catherine Wilson and Anne Collins as the Wives kept their merriment within reasonable bounds, and as Ann Page Sandra Dugdale was, as always, pure enchantment. Michael Langdon did what he could with the skeleton of Falstaff; the role is, after all, an embryo Ochs operatically speaking, and he was well cast. Leonard Hancock, who provided an easy translation, conducted as though he loved the work,.which he obviously does, and avoided all overstatement. Mr Libby helped the dialogue along with extraneous shooting parties and picnics at which the only refreshment offered appeared to be rhubarb. Mr Pollock's huge harvest moon, rising jerkily and on a decidedly unastronomic course, was unfortunate next to that determinedly silver music. Despite three days of Wexford conviviality, there are limits to the amount of kitsch that even I can take.