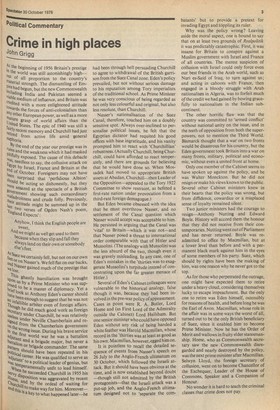 At the beginning of 1956 Britain's prestige in the world was still astonishingly high_ Put of all proportion to the country's material strength. The dismantling of EmPire had begun, but the new Commonwealth Including India and Pakistan seemed a viable medium of influence, and Britain was Credited with a more enlightened attitude towards the forces of anti-colonialism than anY other European power, as well as a more Mature grasp of world affairs than the United States. The epic of 1940 was still a fairlY recent memory and Churchill had just retired from active life amid general enPhoria. RY the end of the year our prestige was in ruins and the weakness which it had masked Pitifully exposed. The cause of this debacle \v,as, needless to say, the collusive attack on 'SYPt by Israel, France and Britain at the ekild of October. Foreigners may not have ',een surprised that 'perfidious Albion' snould be acting so dishonestly, but they were amazed at the spectacle of a British g_nvernment showing such extraordinary ulaladroitness and crude folly. Previously, their attitude might be summed up in the last two verses of Ogden Nash's poem, England Expects' : Anyhow, I think the English people are sweet, And we might as well get used to them because when they slip and fall they dl Ways land on their own or somebody else's feet.

rAt Suezwe certainly fell, but not on our own aeet or on Nasser's. We fell flat on our backs, nd Nasser gained much of the prestige that we lost.

unThts ghastly humiliation was brought by a Prime Minister who was supbn.sed to be a master of diplomacy. Yet a 1.1:1,e,f look at Anthony Eden's career should " ,o 7e been enough to suggest that he was not Tt infallible arbiter even of foreign affairs. se4nugh he did much good work as foreign IlscrietarY under Churchill, he was relatively si eteSS under Neville Chamberlain and rented from the Chamberlain government lie Wrong issue. During his brave service tile first world war he was a battalion b'aJtdtant and a brigade major, but never a Patitan or brigade commander. The same 001.e.rio should have been repeated in his ,,,,n1cal career. He was qualified to serve as w'auJsutant• to a political leader of genius, but wt,ernPeramentally unfit to lead himself. nervuen he succeeded Churchill in 1955 his Illness disPosition was aggravated by recent Cbtrrs' and by the ordeal of waiting for and this make way for him. Moreover— 'S Is a key to what happened later—he had been through hell persuading Churchill to agree to withdrawal of the British garrison from the Suez Canal zone. Eden's policy prevailed, but not without serious damage to his reputation among Tory imperialists of the traditional school. As Prime Minister he was very conscious of being regarded as not only less colourful and original, but also less resolute, than Churchill.

Nasser's nationalisation of the Suez Canal, therefore, touched him on a doubly sensitive spot. Always over-inclined to personalise political issues, he felt that the Egyptian dictator had requited his good offices with base ingratitude, and his vanity prompted him to react with `Churchillian" robustness. (Actually Churchill, being Churchill, could have afforded to react temperately, and there are grounds for believing that he would have done so. When Mossadek had moved to appropriate British assets at Abadan, Churchill—then Leader of the Opposition—appealed to the Tory 1922 Committee to show restraint, as befitted a first-rate nation under provocation from a third-rate foreign demagogue.) But Eden became obsessed with the idea that he must overthrow Nasser, and no settlement of the Canal question which Nasser would accept was acceptable to him. He persisted in arguing that the Canal was 'vital' to Britain—which it was not—and that Nasser posed a threat to international order comparable with that of Hitler and Mussolini. (The analogy with Mussolini was the less absurd of the two, though even it was gravely misleading. In any case, one of Eden's mistakes in the 'thirties was to exaggerate Mussolini's turpitude instead of concentrating upon the far greater menace of Hitler.) Several of Eden's Cabinet colleagues were vulnerable to the historical analogy, false though it was, because they had been involved in the pre-war policy of appeasement. Cases in point were R. A. Butler, Lord Home and (as First Lord of the Admiralty outside the Cabinet) Lord Hailsham. But one senior minister who could have opposed Eden without any risk of being handed a white feather was Harold Macmillan, whose record in the 'thirties was at least as good as his own. Macmillan, however, egged him on.

It is pointless to recall the detailed sequence of events from Nasser's speech on 26 July to the Anglo-French ultimatum on 30 October, which followed the Israeli attack. But it should have been obvious at the time, and is now established beyond doubt _though still not admitted by the British protagonists—that the Israeli attack was a put-up job, and the Anglo-French ultimatum designed not to 'separate the corn batants' but to provide a pretext for invading Egypt and toppling its ruler.

Why was the policy wrong ? Leaving aside the moral aspect, one is bound to say that on at least two grounds of Realpolitik it was predictably catastrophic. First, it was insane for Britain to conspire against a Muslim government with Israel and France of all countries. The merest suspicion of collusion with Israel could only force even our best friends in the Arab world, such as Nun i es-Said of Iraq, to turn against us; and acting in cahoots with France, then engaged in a bloody struggle with Arab nationalism in Algeria, was to forfeit much of the credit we had gained by bowing gracefully to nationalism in the Indian subcontinent.

The other horrific flaw was that the country was committed to 'armed conflict' without national unity on the issue, and in the teeth of opposition from both the superpowers, not to mention the Third World. Bismarck thought that a war on two fronts would be disastrous for his country, but the Eden government took Britain into a war on many fronts, military, political and economic, without even a united front at home.

Only one member of the Cabinet seems to have spoken up against the policy, and he was Walter Monckton. But he did not resign or make his views known to the public. Several other Cabinet ministers knew in their hearts that the policy was wrong, but from diffidence, cowardice or a misplaced sense of loyalty remained silent.

Two junior ministers had the courage to resign—Anthony Nutting and Edward Boyle. History will accord them the honour that they did not receive from their contemporaries. Nutting went out of Parl lament and has never returned. Boyle was readmitted to office by Macmillan, but at a lower level than before and with a permanent black mark against him in the eyes of some members of his party. Suez, which should by rights have been the making of him, was one reason why he never got to the top.

As for those who perpetrated the outrage, one might have expected them to retire under a heavy cloud, considering themselves lucky to escape impeachment. But the only one to retire was Eden himself, ostensibly for reasons of health, and before long he was the Earl of Avon. Macmillan, whose role in the affair was in some ways the worst of all, turned out to be the only British beneficiary of Suez, since it enabled him to become Prime Minister. Now he has the Order of Merit and wallows in fruity elder statesmanship. Home, who as Commonwealth secretary saw the new Commonwealth disregarded and nearly destroyed by the policy, was the next prime minister after Macmillan. Selwyn Lloyd, the foreign secretary of collusion, went on to become Chancellor of the Exchequer, Leader of the House of Commons, Speaker and a Companion of Honour.

No wonder it is hard to teach the criminal classes that crime does not pay.