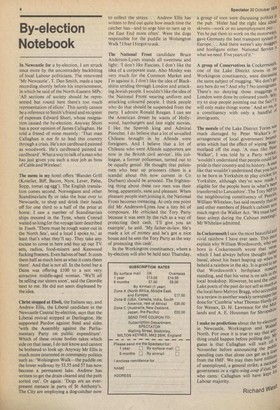 In Newcastle for a by-election, I am struck once more by the uncomradely backbiting of local Labour politicians. The renowned 'Mr Newcastle', T. Dan Smith, made a tape recording shortly before his imprisonment, in which he said of the North-Eastern MPs: 'All sections of society should be represented but round here there's too much representation of idiots'. This surely cannot be a reference to Smith's friend and recipient of expenses Edward Short, whose resignation caused the by-election. Anyway Short has a poor opinion of James Callaghan. He told a friend of mine recently : 'That man Callaghan is not fit to lead this country through a crisis. He's not cardboard painted as woodwork. He's cardboard painted as cardboard'. What a way to talk of a man who has just given you such a nice job as boss of Cable and Wireless!

The menu in my hotel offers '131andet Grill (Kotellet, Biff, Bacon, Nyre, Lever, Poise, Sopp, tomat og egg'). The English translation comes second. Norwegians and other Scandinavians fly or take the boat over to Newcastle, to shop and drink their heads off for one third to a half of the price at home. I saw a number of Scandinavian ships moored in the Tyne, where Conrad waited so long for the voyage later described in Youth. 'There must be rough water out in the North Sea', said a local I spoke to,' at least that's what they'll say. They take any excuse to come in here and buy up our TV sets, radios, food-mixers and Kenwood fucking freezers. Even halves of beef. It costs them half as much here as what it costs them there'. And that is not all. In the hotel bar a Dane was offering £100 to a not very attractive middle-aged woman. 'We'll all be selling our sisters soon', said the Geordie next to me. He did not seem displeased by the idea.

Christ stopped at Eboli, the Italians say, and Andrew Ellis, the Liberal candidate in the Newcastle Central by-election, says that the Liberal revival stopped at Darlington. He supported Pardoe against Steel and sides 'with the Assembly against the Parliamentary Party on public expenditure'. Which of these otiose bodies takes which side on that issue, I do not know and cannot be bothered to look up. Anyway Mr Ellis is much more interested in community politics such as: 'Wolsington Walk—the puddle on the lower walkway by 53,55 and 57 has now become a permanent lake. Andrew has written to get the drain cleared and the path sorted out'. Or again: 'Dogs are an everpresent menace in parts of St Anthony's. The City are employing a dog-catcher now to collect the strays. . . Andrew Ellis has written to find out quite how much time the catcher has—and to urge him to turn up in the East End more often'. Were the dogs responsible for the puddle in Wolsington Walk ? [fear I forgot to ask.

like the Spanish king and Admiral Pinochet. I do believe that a lot of so-called Chileans brought in by Allende were foreigners. And I believe that a lot of Chileans who were Allende supporters are now in the British civil service'. His colleague, a former policeman, turned out to be equally genial. He thought that policemen who beat up prisoners (there is a scandal about this now current in Co Durham) should be arrested. The frightening thing about these two men was their being, apparently, sane and pleasant. When pleasant people start joining it, the National Front becomes menacing. At only one point did Mr Anderson-Lynes lose a tiny bit of composure. He criticised the Tory Party because it was seen by the rich as a way of protecting their cash. 'I'll give you an example', he asid. 'My father-in-law. He's made a lot of money and he's got a nice house and he sees the Tory Party as the way of protecting this cash'.

In the Workington constituency, where a by-election will also be held next Thursday, a group of men were discussing politics in the pub. 'Hitler had the right idea about skivers—work or no unemployment pay. • Yes he put them to work on the motorwaY.s• gave Germany the best transport system In Europe. . . And there weren't any mugger,s and hooligans either. National Service IS what we need. Five years of it.'

A group of Conservatives in Cockermouth, one of the Lake District towns in the Workington constituency, were discussing the same subject of mugging. 'We don't get any here do we? And why ? No immigrants' There's no denying those muggings ,.111, London were done by coloured youth. WEI? try to stop people pointing out the fact? it will only make things worse.' And so on, ter a constituency with only a handful el immigrants.

The morale of the Lake District Tories Os much damaged by Peter Walker's re" arrangement of local government bou0d. aries which had the effect of wiping West: morland off the map. 'A man like Pete' Walker', I was told by a Party worker 'wouldn't understand that people could feel pride in their country and its history. A blan, like that wouldn't understand that you hav' to be born in Yorkshire to play cricket 10,1 Yorkshire, although they've now made it eligible for the people born in what's been, transferred to Lancashire'. The Tory 1"P,f°,,. the neighbouring constituency of Pertrt,;': William Whitelaw, has said recently that rte and other members of Heath's cabinet new much regret the Walker Act. 'We must have. been asleep during the Cabinet meetings' Mr Whitelaw admitted.

In Cockermouth I saw the most beautiful andt vivid rainbow I have ever seen. This Os explain why William Wordsworth, vv11°W95 born in Cockermouth wrote that verse,' which I had always before thought ratheel banal, about his heart leaping up when h,e beheld a rainbow in the sky. It is good to S15 that Wordsworth's birthplace rematilhe standing, and that his verse is on sale in tr local bookshop. However, he and the othes Lake poets of the past do not sell as the local hero Melvyn Bragg, who accorchn to a review in another weekly newspaper 11,3.16 done for 'Cumbria' what Thomas HardY",(1, for Wessex, D. H. Lawrence for the M.' lands and A. E. Housman for ShroPshire.

I make no predictions about the by-electintlisi in Newcastle, Workington and Wals3,, North. For once it is true to say that thing could happen before polling day.. PI guess is that Callaghan will wait till 1.0 November before announcing the Publiri spending cuts that alone can get us a s from the IMF. We may then have main' of unemployed, a general strike, a natic),/itit government or a right-wing coup d'etat, uhis who cares: Callaghan will have kept '" Labour majority.