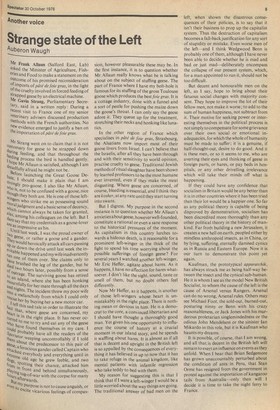 Strange state of the Left

Auberon Waugh Mr Frank Allaun (Salford East, Lab) asked the Minister of Agriculture, Fisheries and Food to make a statement on the outcome of his promised reconsideration of imports of pate de foie gras, in the light Of the cruelty involved in forced feeding of strapped geese by an electrical machine. Mr Gavin Strang, Parliamentary Secretary, said in a written reply: During a recent visit to France one of my senior veterinary advisers discussed production methods with the French authorities. No new evidence emerged to justify a ban on the importation of pcite de foie gras.

Mr Strang went on to claim that it is not c,ittstomary for geese to be strapped down during feeding, and that throughout the ieLeding process the bird is handled gently. :,uolzie Mr Allaun is satisfied, although I am dreadfully afraid he might not be. Before launching the Great Goose Derb,ate, I should make it plain that I am , 6 Y pro-goose. I also like Mr Allaun, Who is, not to be confused with a goose, nice though they both are. He is one of those leftwingers who strike me as possessing sound 111,(3.raljudgment and a basic sense of decency, Which cannot always be taken for granted, alas, among his colleagues on the left. But I dare say that my credentials as a goose-lover are as impressive as his. t Until last week, I was the proud owner of -rwiso geese, or rather a goose and a gander. hey would heroically attack all cars passing UP or down the drive until last week the inevitable happened and my wife inadvertently ri,41.I One of them over. She claims only to ;ve brushed the leg of the gander, but he „Iced two hours later, possibly from a sense outrage. The surviving goose has retired `0 an island, where she has been honking mournfully for her mate through all the days inild nights. The incident threw my poor wife a melancholy from which I could only 'escue her by buying her a new motor car. I tell this sad tale in order to illustrate the h-ct that, where geese are concerned, my ceot Is in the right place. It has never ocwukrred to me to try and eat any of the geese et3u° have found themselves in my care. I s uld Probably have all the readers of the them' Odor weeping uncontrollably if I told ge-F.41 about the predecessor to this pair of iltt"se, a ferocious gander called Captain who ext4ekeo everybody and everything until in do rerhe old age he grew feeble, and two fr,gs, .sPotting their chance, attacked him pl'arrt In front and behind simultaneously, Ying tug-of-war with the corpse for many lhours afterwards. eve ur nlY Purpose is not to cause anguish, or n to excite vicarious feelings of compas sion, however pleasurable these may be. In the first instance, it is to question whether Mr Allaun really knows what he is talking about on the subject of stuffing geese. The part of France where I have my bolt-hole is famous for its stuffing of the gross Toulouse goose which produces the best .foie gras. It is a cottage industry, done with a funnel and a sort of pestle for pushing the maize down the goose's throat. I can only say the geese adore it. They queue up for the treatment, stretching their necks and honking like lunatics.

In the other region of France which specialises in pate de _foie gras, Strasbourg, the Alsatians now import most of their goose livers from Israel. I can't believe that the Israelis, after all they have been through and with their sensitivity to world opinion, practise cruelty to geese. Traditional Jewish methods of ritual slaughter have been shown by learned professors to be the most humane ever invented, even if they make the meat disgusting. Where geese are concerned, of course, bleeding is essential, and I think they are kosher, at any rate until they start turning into swans.

But I digress. My purpose in the second instance is to question whether Mr Allaun's anxieties about geese, however well-founded, constitute a rational or even a sane response to the historical pressures of the moment. As capitalism in this country lurches towards a hideous death, is it reasonable for a prominent left-winger in the thick of the fight to spend his time worrying about the possible sufferings of foreign geese? For several years I watched another left-winger, Mr Eric Heifer, agitate about hares. As it happens, I have no affection for hares whatsoever. I don't like the sight, sound, taste or smell of them, but no doubt others feel differently.

Now Mr Heifer, as it happens, is another of those left-wingers whose heart is unmistakably in the right place. There is nothing mean or devious in him. He is a democrat to the core, a convinced libertarian and I should have thought a thoroughly good man. Yet given his one opportunity to influence the course of history at a crucial moment in our island story, and he spends it waffling about hares. It is almost as if all that is decent and upright in the British left is so appalled by the consequences of everything it has believed in up to now that it has to take refuge in the animal kingdom, like mental patients with infantile regression who take teddy to bed with them.

My reason for suggesting this is that I think that if I were a left-winger I would be a little worried about the way things are going. The traditional answer of bad men on the left, when shown the disastrous consequences of their policies, is to say that it isn't their business to prop up the capitalist system. Thus the destruction of capitalism becomes a fall-back justification for any sort of stupidity or mistake. Even worse men of the left—and I think Wedgwood Benn is probably one of them, although I have never been able to decide whether he is mad and bad or just mad—deliberately encompass the collapse of our present system, which, for a man appointed to run it, should not be too difficult.

But decent and honourable men on the left, as I say, hope to bring about their fatuous social changes with majority consent. They hope to improve the lot of their fellow men, not make it worse; to add to the sum of human happiness, not subtract from it. Their motive for seeking power or interesting themselves in the political process is not simply to compensate for some grievance over their own social or emotional inadequacies, for which the whole of humanity must be made to suffer; it is a genuine, if half-thought-out, desire to do good. And it is these men, or so it seems to me, who are averting their eyes and thinking of geese in foreign parts, or hares, or pay beds in hospitals, or any other drivelling irrelevance which will take their minds off what is happening.

If they could have any confidence that socialism in Britain would be any better than it is in other countries where it has been tried then their lot would be a happier one. So far as any political theory is capable of being disproved by demonstration, socialism has been discredited more thoroughly than any other political theory in the history of mankind. Far froth building a new Jerusalem, it creates a new hell on earth, peopled either by mindless anthropoid insects, as in China, or by lying, suffering, eternally damned cynics as in Russia and Eastern Europe. Now it is our turn to demonstrate this point yet again.

Kaufman, the prototypical apparatehik, has always struck me as being half-way between the insect and the cynical sub-human. He it is whom I see as the model New British Socialist, to whom the cause of the left is the cause of Arsenal versus Rangers. Arsenal can do no wrong, Arsenal rules. Others may see Michael Foot, the sold-out, burned-out, posturing ninny or Benn with his crazy reasonableness, or Jack Jones with his murderous proletarian singlemindedness or the odious John Mendelson or the sinister Ian Mikardo in this role, but it is Kaufman who haunts my dreams.

It is possible, of course, that I am wrong, and all that, is decent in the British left will remain to exert an influence on events as they unfold. When I hear that Brian Sedgemore has grown unaccountably perturbed about the condition of ants in Peru, that Stan Orme has resigned from the government in protest against the importation of kangaroo tails from Australia—only then will I decide it is time to take the night ferry to France.