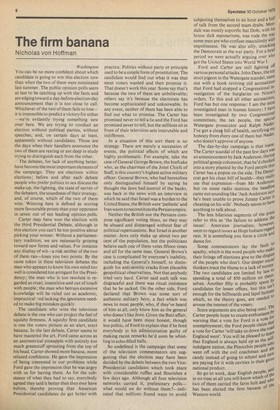 You can be no more confident about which candidate is going to win this election now than when the two of them were nominated last summer. The public opinion polls seem at last to be catching up with the facts and are edging toward a day-before-election-day announcement that it is too close to call. Whichever of the two of them fails to lose— it is impossible to predict a victory for either —we're evidently trying something new over here. We are trying to conduct an election without political parties, without speeches, and, on certain days at least, apparently without candidates. Those are the days when their handlers announce the two of them are resting or are deep in study trying to distinguish each from the other.

The debates, for lack of anything better, have become the most important elements of the campaign. They are elections within elections; before and after each debate people who prefer politics to sex discuss the make-up, the lighting, the state of nerves of the debaters, the soundness of their strategy, and, of course, which of the two of them won. Winning here is defined as scoring more favourable points than your opponent in seven out of ten leading opinion polls.

Carter may have won the election with the third Presidential Debate, although in this election you can't be too positive about picking your winner. Without a parliamentary tradition, we are neeessarily groping toward new forms and values. For instance any display of wit—a risk neither of the two of them ran—loses you two points. By the same token in these television debates the man who appears to know his own mind too well is considered too arrogant for the Presidency; the man who is too resolute is regarded as cruel, insensitive and out of touch with people; the man who betrays excessive knowledge will be ruled out as academic, impractical .,nd lacking the ignorance needed to make big mistakes quickly.

The candidate who wins the television debate is the one who can project the feel of squishy firmness. A squishy firm candidate is one the voters picture as an alert, erect banana. In the last debate, Carter seems to have mastered the art. Ford came across as an assymetrical pineapple with entirely too much greenstuff sprouting from the top of his head. Carter showed more banana, more relaxed confidence. He gave the impression of being interested in our problems while Ford gave the impression that he was angry with us for having them. As for the sub stance of what they had to say, everybody agreed they said it better then they ever have before, thereby proving that American Presidential candidates do get better with practice. Politics without party or principle used to be a simple form of prostitution. The candidate would find out what it was that most voters wanted and then promise it. That doesn't work this year. Some say that's because the two of them are unbelievable; others say it's because the electorate has become sophisticated and unknowable. In any event, neither of them has been able to find out what to promise. The Carter has promised never to tell a lie and the Ford has promised never to tell, but the millions sit in front of their television sets inscrutable and indifferent.

In a situation of this sort there is no strategy. There are merely a succession of events, the political effects of which are highly problematic. For example, take the case of General George Brown, the beefcake who, as the chairman of the Joint Chiefs of Staff, is this country's highest active military officer. General Brown, who had heretofore only distinguished himself by saying he thought the Jews had control of the banks, was back in the news with an interview in which he said that Israel was a burden to the United States, the British were 'pathetic' and Iran wants to reconstitute the Persian empire.

Neither the British nor the Persians compose significant voting blocs, so they may be abused and disparaged without fear of political repercussions. But Israel is another matter. Jews only make up about two per cent of the population, but the politicians believe each one of them votes fifteen times and all for the same man. General Brown's case is complicated by everyone's inability, including the General's himself, to distinguish his anti-semitic cracks from plausible geopolitical observations. Not that anybody tried very hard. Carter said such talk was disgraceful and there was ritual insistence that he be sacked. On the other side, Ford declared that Brown was some sort of authentic military hero, a fact which was news to most people, who, if they've heard of him at All, only know him as the general who doesn't like Jews. Given the Butz affair, it would have been more honest, though less politic, of Ford to explain that if he fired everybody in his administration guilty of making racist remarks he'd soon be whistling in echo-filled halls.

So undefined is the campaign that some of the television commentators are suggesting that the election may have been decided by the debate between the two VicePresidential candidates which took place with considerable ruffles and flourishes a few days ago. Although all four television networks carried it, preliminary polls— what would we do without them ?---ind cated that millions found ways to avoid

subjecting themselves to an hour and a half of talk from the second team drabs. Mon" dale was mostly soporific but Dole, with his house dick mannerisms, was rude the waY some men are who confuse masculinity with impoliteness. He was also silly, attacking the Democrats as the war party. For a brief period we were actually arguing over who got the United States into World War I. Ford and Carter are still fighting Off various personal attacks. John Dean, the toP stool pigeon in the Watergate scandal, came out with a book reviving old accusations that Ford had stopped a Congressional in' vestigation of the burglaries on Nixon's orders. To this and all other accusations. Ford has but one response: I am the most investigated man in human history; I have, been investigated by two Congressional committees, the tak people, the special Watergate prosecutor and Ralph Nader' I've got a cleaci bill of health, certifying irlY honesty from every one of them but Nader, who doesn't approve of anyone. The day-by-day campaign is that inane. The Carter scandal of the past few days was an announcement by Jack Anderson, theta, political gossip columnist, that he'd checkea into a story planted by the Ford people that Carter has a popsie on the side. The Dem(' crat got his clean bill of health—they reallY use that expression—from Mr Anderson, but on some radio stations the headline came out sounding like 'Jack Anderson saYs he's been unable to prove Jimmy Carter is cheating on his wife'. Nobody seems to have anything to talk about. The less hilarious segments of the Press refer to this as 'the failure to address the issues'. American journalists, hovveverA' seem to regard issues as Hopi Indians regal': rain. It is something you form a circle an dance for. Some commentators lay the fault t° apathy, which is the word people who make, their livings off elections give to thedisgas; of the people who don't. Our deeper social thinkers trace the blame to a lack of mond. The two candidates are limited by law t° spending a total of 550 million on Mel' selves. Another fifty is probably spent b,yt candidates for lesser offices, but this isn enough for the billboards and lapel buttono' which, so the theory goes, are needed t arouse the interest of the voters. Scare arguments are also being used. The Carter people hope to create enthusiasnl bYr warning that a vote for Ford is a vote f°t unemployment ; the Ford people claim Oa, a vote for Carter 'will take us down the roan_ England went'. You will be pleased to lea,r,.! that England is always held up as the se.% indulgent nation, the Pinocchio people wn_ went off with the evil coachman and al" candy instead of going to school and Ors arepayinpgrofodructitwith cavities in their g national rc's and So go to work, dear English people, in no time at all you will kno* which of To' two of them carried the farm belt and has been elected the firm banana of t" Western world.