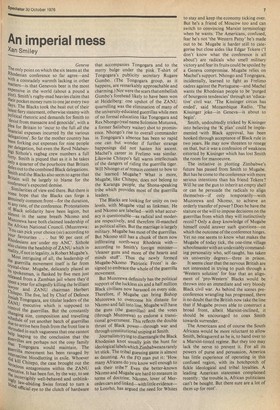 Geneva The only point on which the six teams at the Rhodesian conference so far agree—and with a comradely warmth lacking in other matters is that Genevois beer is the most expensive in the world (about a pound a Pint). Smith's rugby-mad heavies claim that their Pocket money runs to one jar every two uaYs. The Blacks took the heat out of their latest fiery statement, otherwise steamy with Political rhetoric and demands for Smith to desist from massacre and genocide', with a Plea for Britain to 'incur to the full all the financial expenses incurred by the various elegations'. So far the mother country has Peen forking out expenses for nine people per delegation, but even the Revd NdabanSithole's ragbag crew numbers a full I°11Y. Smith is piqued that as it is he takes °fly a quarter of the pourboire that Britain doles out to the combined Black delegations. Smith and the Blacks also seem to agree that Britain will be largely to blame for the conference's expected demise. Similarities of view end there. But there is some hope that the Blacks can forge a genuinely common front—for the duration, al any rate, of the conference. Protestations a Black solidarity have been legion, but a_lnlost in the same breath Nkomo and Muzorewa have both claimed leadership of t,he African National Council. (Muzorewa: You can pick your choice (sic) according to Your favourites . . . but 90 per cent of Rhodesians are under my ANC'. Sithole also .claims the headship of ZANU which in realt, if not in legality, is Robert Mugabe's. t h Most intriguing of all, the leadership of e guerrilla movement itself is far from e, rYstal-clear. Mugabe, delicately placed as sPokesman, is flanked by five men just released from a Zambian jail where they'd 81!)ent a year for allegedly killing the brilliant `‘wYer and ZANU chairman Herbert ltePo. The five, led by Chief of Defence Tongogara, are titular leaders of the c4ANU executive which is supposed to chontrol the guerrillas. But the constantly s ,anging size, composition and travelling ctenedule of yet another batch of guerrillas 0.4e to arrive here fresh from the front line is illirouded in such vagueness that one cannot elP leaping to the conclusion that* the are perhaps not the cosy family that Tongogara would maintain. The .itititerrilla movement has been ravaged by d.'ernecine bloodletting in exile. Whoever kill Chitepo, the case brought out the e."r°clous antagonisms within the ZANU theOutive. It has been fun, by the way, to see the incorrigibly well-behaved and unblink01Y, law-abiding Swiss forced to turn a 'nu official eye to the clutch of hardware

that accompanies Tongogara and to the merry bulge under the pink T-shirt of Tongogara's publicity secretary Rugare Gumbo. (The Tongogara group, as it happens, are remarkably approachable and charming.) Nor were the scars that embellish Gumbo's forehead likely to have been won at Heidelberg: one upshot of the ZANU quarrelling was the elimination of many of the university-educated guerrillas while men of no formal education like Tongogara and Rex Nhongo (real name Solomon Mutuswa, a former Salisbury waiter) shot to prominence. Nhongo's rise to overall commander in Tongogara's absence has been so rapid one can but wonder if further strange happenings did not hasten his ascent. Machel's career in Frelimo was similar. Likewise Chitepo's fall warns intellectuals of the dangers of riding the guerrilla tiger. Will Nhongo et al remain content to bow to the learned Mugabe ? What is more, Mugabe, like Chitepo, does not belong to the Karanga people, the Shona-speaking tribe which provides most of the guerrilla leaders.

The Blacks are looking for unity on two levels, with Mugabe vital as linkman. He and Nkomo are labelled—with what accuracy is questionable—as radical and moderate respectively, and therefore ill-matched as political allies. But the marriage is largely military. Mugabe has most of the guerrillas. But Nkomo still has a chunk of them now infiltrating north-west Rhodesia with— according to Smith's foreign minister— 'cleaner guns and more of the hearts and minds stuff'. Thus the newly formed Mugabe-Nkomo 'Patriotic Front' is designed to embrace the whole of the guerrilla movement.

But Muzorewa definitely has the political support of the luckless six and a half million Black civilians now harassed on every side. Therefore, if Mugabe can bring Bishop Muzorewa to overcome his distaste for Nkomo and fall into line, Mugabe will have the guns (the guerrillas) and the votes (through Muzorewa) to endorse a transitional government. This reflects the double thrust of Black power—through war and through constitutional sniping at Smith.

Journalists trying to disentangle the Black Rhodesian knot usually join the hunt for ideological labels which Zimbabweans rarely let stick. The tribal guessing game is almost as daunting. As the FO man put it: 'How many Africans do you know well enough to ask their tribe ?' Even the better-known Nkomo and Mugabe are hard to measure in terms of doctrine. Nkomo, lover of Mercedes cars and linked—with little evidence— to Lonrho, has argued the need for Whites to stay and keep the economy ticking over. But he's a friend of Moscow too and can switch to convincing Marxist terminology when he wants. The Americans, confused, fear he's not 'the Western Patsy' he's made out to be. Mugabe is harder still to categorise but close aides like Edgar Tekere ('I don't know what the conference is all about') are radicals who smell military victory and fear its fruits could be spoiled by a Geneva compromise. Mugabe relies on Machel's support. Nhongo and Tongogara, incidentally, learned to fight as Frelimo cadres against the Portuguese—and Machel wants the Rhodesian people to be 'purged of bourgeois tendencies' through an 'educative' civil war. 'The Kissinger circus has ended', said Mozambique Radio. 'The Kissinger joke—in Geneva—is about to begin'.

Smith, undoubtedly tricked by Kissinger into believing the `K plan' could be implemented with Black approval, has been hooked through acceptance of Black rule in two years. He may now threaten to renege on that, but it was a confession of weakness extorted by Kissinger which has lost Smith the room for manoeuvre.

The initiative in plotting Zimbabwe's future has passed from Smith to Mugabe. But has he come to the conference with more serious intentions than his friend Tekere ? Will he use the gun to inherit an empty shell or can he persuade the radicals to align themselves—if only temporarily—with Muzorewa and Nkomo, to achieve an orderly transfer of power? Does he have the stature or the will to impose decisions on the guerrillas from which they will instinctively recoil ? Only a deep knowledge of Mugabe himself could answer such questions—on which the outcome of the conference hinges. Yet no one seems to know what makes the Mugabe of today tick, the one-time village schoolmaster with an undeniably commanding personality who, self-taught, has taken six university degrees—three in prison.

It seems clear that the nervous British are not interested in trying to push through a 'Western solution' for fear that an alignment of 'pro-Western' Blacks would be thrown into an immediate and very bloody Black civil war. As behind the scenes preconference wrangling has progressed, there is no doubt that the British now take the line that if Mugabe proves able to construct a broad front, albeit Marxist-inclined, it should be encouraged to coax Smith towards surrender.

The Americans and of course the South Africans would be more reluctant to allow Smith, beleaguered as he is, to hand over to a Marxist-tinted regime. But they too may lack the nerve to prevent it. For all its powers of purse and persuasion, America has little experience of operating in this confused region, with its hotchpotch of fickle ideological and tribal loyalties. A leading American statesman complained recently: 'the trouble is, African politicians can't be bought. But there sure are a lot of them up for rent'.