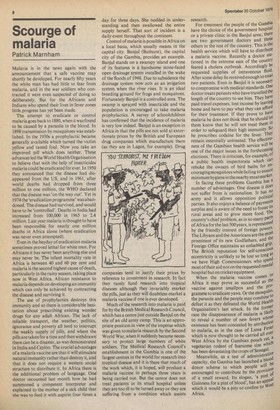 Malaria is in the news again with the announcement that a safe vaccine may shortly be developed. For nearly fifty years the white man has had little to fear from malaria, and in the war soldiers who con tracted it were even suspected of doing so deliberately. But for the Africans and Indians who spend their lives in fever zones little progress has yet been made.

The attempt to eradicate or control malaria goes back to 1880, when it was found to be caused by a parasite in the blood. In 1898 transmission by mosquitoes was established. In the 1930s a prophylactic became generally available which turned the victim yellow and tasted foul. Now you take an improved pill which does neither. These advances led the World Health Organisation to believe that with the help of insecticides malaria could be eradicated forever. In 1950 they announced that the disease had disappeared from the US, and in 1961, after world deaths had dropped from three million to one million, the WHO declared that the disease was `on the way out'. Yet in 1974 the eradication programme' was abandoned. The disease had survived, and would have to be controlled'. Deaths in India had increased from 100,000 in 1965 to 2.4 million. Last year malaria is thought to have been responsible for nearly one million deaths in Africa alone (where eradication was never even attempted).

Even in the heyday of eradication malaria sometimes proved lethal for white men. For Africans it has never been anything else and may never be. The infant mortality rate in Africa is between 40 and 60 per cent and malaria is the second highest cause of death, particularly in the rainy season, taking place now in West Africa. African resistance to malaria depends on developing an immunity which can only be achieved by contracting the disease and surviving it.

The use of prophylactics destroys this immunity and so there is considerable hesi tation about prescribing existing wonder drugs for any adult African. The lack of reliable transport, the weather, politics, ignorance and poverty all tend to interrupt the weekly supply of pills, and where the pills are taken for a time and then withdrawn there can be a disaster, as was demonstrated in India and Ceylon. The crucial advantages of a malaria vaccine are that it will stimulate natural immunity rather than destroy it, and that it does not require a western social structure to distribute it. In Africa there is the additional problem of language. One doctor recounted last month how he had summoned a competent interpreter and explained to the mother of a sick child that she was to feed it with aspirin four times a day for three days. She nodded in understanding and then swallowed the entire supply herself. That sort of incident is a daily event throughout the continent.

Control of malaria is possible in Africa on a local basis, which usually means in the capital city. Banjul (Bathurst), the capital city of the Gambia, provides an example. Banjul stands on a swampy island and one of its features is a handsome stone-faced open drainage system installed in the wake of the floods of 1948. Due to subsidence the drainage system now acts as an irrigation system when the river rises. It is an ideal breeding ground for frogs and mosquitoes. Fortunately Banjul is a controlled area. The swamp is sprayed with insecticide and the population is encouraged to take malaria prophylactics. A survey of schoolchildren has confirmed that the incidence of malaria is very low indeed. Banjul is an exception in Africa in that the pills are not sold at extortionate prices by the British and European drug companies which manufacture them (as they are in Lagos, for example). Drug companies tend to justify their prices by reference to investment in research. In fact they rarely fund research into tropical diseases although they invariably market the pills, just as they will doubtless market a malaria vaccine if one is ever developed.

Much of the research into malaria is paid for by the British Medical Research Council, which has a centre just outside Banjul on the site of an old army camp. This is an appropriate position in view of the impetus which was given to malaria research by the Second World War, when it suddenly became necessary to protect large numbers of white soldiers. The Medical Research Council's establishment in the Gambia is one of the largest centres in the world for research into tropical disease and it is there that much of the work which, it is hoped, will produce a malaria vaccine in perhaps three years is being carried out. But the centre does not treat patients in its small hospital unless they are too ill to be turned away or they are suffering from a condition which assists research.

For treatment the people of the Gambia have the choice of the government hospital or a private clinic in the Banjul area; there are two government doctors and three others in the rest of the country. This is the health service which will have to distribute a malaria vaccine. Recently a doctor stationed in the extreme east of the country feared a cholera outbreak. Accordingly he requested supplies of intravenous fluid. After some delay he received enough to treat two patients. Even in Banjul it is necessary to compromise with medical standards. One doctor treats patients who have travelled the

length of the country to see him. They have paid travel expenses, lost income by leaving home and have to pay what they can afford for their treatment. If they prove to have malaria he does not think that he should let them know that he will not treat them In order to safeguard their high immunity. S° he prescribes codeine for the fever. They remain essentially untreated. The effectiveness of the Gambian health service will be one of the major issues in the forthcoming elections. There is criticism, for example, of a public health inspectorate which can rebuke the owners of bird baths for encouraging mosquitoes while failing to ensure minimum hygiene in the nearby meat market. In facing these problems Gambia has a number of advantages. One disease it does not suffer from is nationalism. It has.no army and it allows opposition political parties. It also enjoys a balance of paYments surplus and is aware of the need to foster Its rural areas and to grow more food. The country's chief problem, as in so many Parts, of Africa for the last 500 years, is represente° by the friendly interest of foreign powers. The Libyans and the Americans are the most prominent of its new Godfathers, and the Foreign Office maintains an enfeebled grIP' The British reputation for self-conscious eccentricity is unlikely to be lost so long as we have High Commissioners who spend most of their aid not on the requested mental hospital but on cricket equipment. When the malaria vaccine comes t° Africa it may prove as successful as the vaccine against smallpox and the Pro" gramme to eradicate yaws. Or the mosclutt°' the parasite and the people may combine t° defeat it as they defeated the World Health Organisation's last attack. In the forrner case the disappearance of malaria is likelY to reveal a number of new fevers whose existence has been concealed by attribution to malaria, as in the case of Lassa Fever which is now thought to be carried all over West Africa by the Gambian pouch rat, vegetarian rodent of fearsome size will° has been devastating the crops of Senegali Meanwhile, as a test of administrative capacity, the Gambia has launched a blood donor scheme to which people Will be encouraged to contribute by the provisionf of a small reward. Its slogan, 'a Pint °I Guinness for a pint of blood', has an aPPea: which it would be a pity to confine to Wes' Africa.