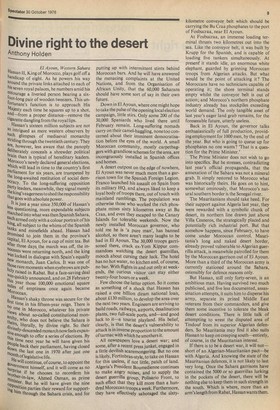 Divine right to the desert

El Ayoun, Western Sahara Hassan II, King of Morocco, plays golf off a handicap of eight. As he powers his way around the private links attached to each of his seven royal palaces, he numbers amid his entourage a liveried person bearing a sixfnot-long pair of wooden tweezers. This unfortunate's function is to approach His Majesty each time he squares up to a shot, and—from a proper distance—remove the cigarette dangling from the royal lips. Hassan's sixteen million subjects are not as intrigued as mere western observers by such glimpses of mediaeval monarchy striding through the twentieth century. They are, however, less aware that the panoply deliberately conceals a shrewder political brain than is typical of hereditary leaders. Morocco's newly declared general elections, Which will lead in time to the country's first Parliament for six years, are trumpeted by the long-awaited restitution of social dem°cracY. To the long-suffering opposition Party leaders, meanwhile, they signal merely the king's eagerness to shed the responsibility that goes with absolute power. , It is just a year since 350,000 of Hassan's less questioning, more expendable subjects Marched into what was then Spanish Sahara, hee armed only with a colour portrait of his all subject to the whims of the Spanish tanks and minefields ahead. Hassan had Promised to join them in the province's capital, El Ayoun, for a cup of mint tea. But after three daythe march was off, the inWere returning north, and the king was locked in dialogue with Spain's equally i.new monarch, Juan Carlos. It was one of ose rare moments when eyebrows are pubdclY raised in Rabat. But a face-saving deal vv,_a.s quickly announced, and on 28 February t`lts Year those 100,000 emotional square nilles of emptiness once again became Ntoroccan. 6 Hassan's shaky throne was secure for the rst time in his fifteen-year reign. There is one in Morocco, whatever his private levvs about so-called constitutional monY, who does not believe the Sahara is :.etrs, literally, by divine right. So their `i_tvinely-descended monarch now feels expants,IVe enough to offer a series of elections. By isms time next year he will have given his ,}f°Ple back their parliament, having closed !own the last one in 1970 after just one month of legislative life. g„He will continue, of course, to appoint the :'vernment himself, and it will come as no sc if he chooses to reconfirm his 3r.other-in-law, Ahmed Osman, as prime

_Illinister. But he will have given the nine "inPP0s.ition parties their reward for support'1111 through the Sahara crisis, and for

putting up with intermittent stints behind Moroccan bars. And he will have answered the menacing complaints at the United Nations, and from the Organisation of African Unity, that the 60,000 Saharans should have some sort of say in their own future.

Down in El Ayoun, where one might hope to take the pulse of the opening local election campaign, little stirs. Only some 200 of the 30,000 Spaniards who lived there until February remain. Long-suffering nomads carry on their camel-haggling, nonetoo concerned about their imminent democratisation before the eyes of the world. A small Moroccan community, mostly carpetbaggers with grandiose schemes for the area, are incongruously installed in Spanish offices and homes.

A desert outpost on the edge of nowhere, El Ayoun was never much more than a garrison town for the Spanish Foreign Legion. Franco launched his assault on Spain from its military HQ, and always liked to keep a loyal body of troops there, out of touch with mainland rumblings. The population was otherwise those who worked the rich phosphate mines sixty kilometres away at Bu Craa, and even they escaped to the Canary Islands for tolerable weekends. Now the newly installed Moroccan governor, who told me he is 'a pure man', has banned alcohol, so there aren't many laughs to be had in El Ayoun. The 30,000 troops garrisoned there, crack ex-Yom Kippur cornmandoes watching the desert guerrillas, mooch about cursing their luck. The hotel has no hot water, no kitchen and, of course, no bar. With flights in and out only at weekends, the curious visitor can stay either twenty-four hours or a week.

Few choose the latter option. So it comes as something of a shock that Hassan has raised a one billion diram national loan, about £130 million, to develop the area over the next two years. Engineers are arriving to build roads, railways, airports, desalination plants, two full-scale ports, and—and good luck to it—a tourist playland. His belief, clearly, is that the desert's vulnerability to attack is in inverse proportion to the amount of tarmac with which he smothers it.

All newspapers love a desert war; and some, after a recent press junket, engaged in a little devilish scaremongering. But no one is likely, Fortinbras-style, to take on Hassan for this useless, if not little, patch of land. Algeria's President Boumedienne continues to make angry noises, and to supply the desert guerrilla group, Polisario Front, to such effect that they kill more than a hundred Moroccan troops a week. Furthermore, they have effectively sabotaged the sixty

kilometre conveyor belt which should be carrying the Bu Craa phosphates to the port of Fosbucraa, near El Ayoun.

At Fosbucraa, an immense loading terminal thrusts two kilometres out into the sea. Like the conveyor belt, it was built by Krupp for the Spanish, and is capable of loading five tankers simultaneously. At present' it stands idle, an enormous white elephant, guarded by grinning Moroccan troops from Algerian attacks. But what would be the point of attacking it ? The Moroccans have no technicians capable of operating it; the shore terminal stands empty whilst the conveyor belt is out of action; and Morocco's northern phosphate industry already has stockpiles exceeding world demand. The only tangible asset of last year's eager land grab remains, for the foreseeable future, utterly useless.

Back in El Ayoun, the governor talks enthusiastically of full production, providing employment for 1000 men, by the end of the year. But who is going to queue up for phosphates no one wants? 'That is a question for the Prime Minister.'

The Prime Minister does not wish to go into specifics. But he stresses, contradicting last year's official propaganda, that the annexation of the Sahara was not a mineral grab. It simply restored to Morocco what was historically theirs. He goes on to hint, somewhat ominously, that Morocco's natural southern border is the Senegal river.

The Mauritanians should take heed. For their support against Algeria last year, they were rewarded with a symbolic chunk of desert, its northern line drawn just above Villa Cesneros, the strategically placed and potentially rich industrial port. But that somehow happens, since February, to have come under Moroccan control. Mauritania's long and naked desert border, already proved vulnerable to Algerian guerrilla attack, is meanwhile patrolled for them by the Moroccan garrison out of El Ayoun. More than a third of the Moroccan army is currently stationed around the Sahara, ostensibly for defence reasons only.

But Hassan, still only forty-seven, is an ambitious man. Having survived two much publicised, and five less documented, assassination attempts, it suits him to disperse his army, separate its prized Middle East veterans from their commanders, and give them some incentive to tolerate the bleak desert conditions. There is little talk of attempting to wrest the disputed area of Tindouf from its superior Algerian defenders. So Mauritania may find it also suits Hassan to keep on creeping south—entirely, of course, in the Mauritanian interest.

If there is to be a desert war, it will not— short of an Algerian-Mauritanian pact—be with Algeria. And knowing the state of the Mauritanian defences, it is not likely to last very long. Once the Sahara garrisons have contained the 5000 or so guerrillas lurking in the pockets of the desert, there will be nothing else to keep them in such strength in the south. Which is where, more than an arm's length from Rabat, Hassan wants them.