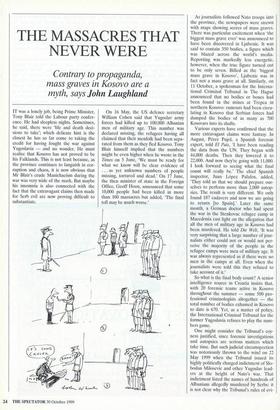 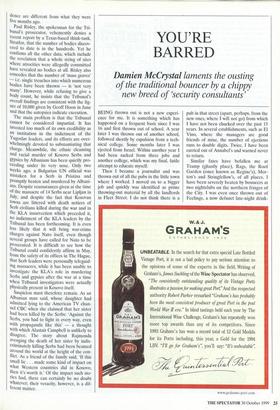 THE MASSACRES THAT NEVER WERE

Contrary to propaganda, mass graves in Kosovo are a myth, says John Laughland

IT was a lonely job, being Prime Minister, Tony Blair told the Labour party confer- ence. He had sleepless nights. Sometimes, he said, there were 'life and death deci- sions to take'; which delicate hint is the closest he has so far come to taking the credit for having fought the war against Yugoslavia — and no wonder. He must realise that Kosovo has not proved to be his Falklands. This is not least because, as the province continues to languish in cor- ruption and chaos, it is now obvious that Mr Blair's crude Manichaeism during the war was very wide of the mark. But maybe his insomnia is also connected with the fact that the extravagant claims then made for Serb evil are now proving difficult to substantiate.

On 16 May, the US defence secretary William Cohen said that Yugoslav army forces had killed up to 100,000 Albanian men of military age. This number was declared missing, the refugees having all claimed that their menfolk had been sepa- rated from them as they fled Kosovo. Tony Blair himself implied that the numbers might be even higher when he wrote in the Times on 5 June, 'We must be ready for what we know will be clear evidence of ... as yet unknown numbers of people missing, tortured and dead.' On 17 June, the then minister of state in the Foreign Office, Geoff Hoon, announced that some 10,000 people had been killed in more than 100 massacres but added, 'The final toll may be much worse.'

As journalists followed Nato troops into the province, the newspapers were strewn with maps showing scores of mass graves. There was particular excitement when 'the biggest mass grave ever' was announced to have been discovered in Ljubenic. It was said to contain 350 bodies, a figure which was blazed across the world's media. Reporting was markedly less energetic, however, when the true figure turned out to be only seven. Billed as the 'biggest mass grave in Kosovo', Ljubenic was in fact not a mass grave at all. Similarly, on 11 October, a spokesman for the Interna- tional Criminal Tribunal in The Hague announced that no bodies or bones had been found in the mines at Trepca in northern Kosovo: rumours had been circu- lating in Kosovo that Serbian forces had dumped the bodies of as many as 700 Kosovars into its shafts.

Various experts have confirmed that the more extravagant claims were fantasy. In August, Perez Pujol, a Spanish forensic expert, told El Pais, 'I have been reading the data from the UN. They began with 44,000 deaths. Then they lowered it to 22,000. And now they're going with 11,000. I look forward to seeing what the final count will really be.' The chief Spanish inspector, Juan Lopez Palafox, added, 'They told us that we should prepare our- selves to perform more than 2,000 autop- sies. The result is very different. We only found 187 cadavers and now we are going to return [to Spain].' Later the same month, a German doctor who had spent the war in the Stenkovac refugee camp in Macedonia cast light on the allegation that all the men of military age in Kosovo had been murdered. He told Die Welt, 'It was very surprising that a large number of jour- nalists either could not or would not per- ceive the majority of the people in the refugee camps were men of military age. It was always represented as if there were no men in the camps at all. Even when the journalists were told this they refused to take account of it.'

So what is the final body count? A senior intelligence source in Croatia insists that, with 20 forensic teams active in Kosovo throughout the summer — some 500 pro- fessional criminologists altogether — the total number of bodies exhumed in Kosovo to date is 670. Yet, as a matter of policy, the International Criminal Tribunal for the former Yugoslavia refuses to play the num- bers game.

One might consider the Tribunal's coy- ness justified, since forensic investigations and autopsies are serious matters which take time. But such judicial circumspection was notoriously thrown to the wind on 22 May 1999 when the Tribunal issued its highly politically charged indictment of Slo- bodan Milosevic and other Yugoslav lead- ers at the height of Nato's war. That indictment listed the names of hundreds of Albanians allegedly murdered by Serbs: it is not clear why the Tribunal's rules of evi- deuce are different from what they were five months ago. Paul Risley, the spokesman for the Tri- bunal's prosecutor, vehemently denies a recent report by a Texas-based think-tank, Stratfor, that the number of bodies discov- ered to date is in the hundreds. Yet he confirms all the other data, which include the revelation that a whole string of sites where atrocities were allegedly committed have revealed no bodies at all. Risley also concedes that the number of `mass graves' — i.e. single trenches into which numerous bodies have been thrown — is `not very many'. However, while refusing to give a body count, he insists that the Tribunal's overall findings are consistent with the fig- ure of 10,000 given by Geoff Hoon in June and that the autopsies indicate execution. The main problem is that the Tribunal cannot be considered impartial. It has invested too much of its own credibility as an institution in the indictment of the Yugoslav leaders, and its efforts are over- whelmingly devoted to substantiating that charge. Meanwhile, the ethnic cleansing and racial murder of Kosovo Serbs and gypsies by Albanians has been quietly pro- ceeding under its very nose. Only two weeks ago, a Bulgarian UN official was mistaken for a Serb in Pristina and promptly beaten and murdered by Albani- ans. Despite reassurances given at the time of the massacre of 14 Serbs near Lipljan in July, and despite the fact that Kosovan towns are littered with death notices of Serb civilians killed during the war and in the KLA insurrection which preceded it, no indictment of the KLA leaders by the Tribunal has been forthcoming. It is even less likely that it will bring war-crime charges against Nato itself, even though several groups have called for Nato to be Prosecuted. It is difficult to see how the Tribunal could confidently affirm in May, from the safety of its offices in The Hague, that Serb leaders were personally teleguid- alg massacres, while it has been unable to investigate the KLA's role in murdering Serbs and gypsies after the war at a time when Tribunal investigators were actually physically present in Kosovo itself.

Suspicion must therefore remain. As an Albanian man said, whose daughter had admitted lying to the American TV chan- nel CBC when she claimed that her sister had been killed by the Serbs: 'Against the Serbs, you had to fight in every way, even with propaganda like this' — a thought with which Alastair Campbell is unlikely to disagree. The story about Rajmonda avenging the death of her sister by indis- criminately killing Serbs had been beamed around the world at the height of the con- flict. As a friend of the family said, `If this small lie ... made some kind of impact on what Western countries did in Kosovo, then it's worth it.' Of the impact such sto- ries had, there can certainly be no doubt whatever; their veracity, however, is a dif- ferent matter.