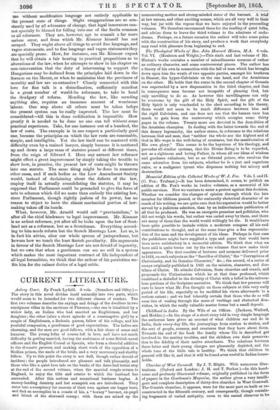 vols. Vol. VI. (Houlston and Wright.)—This sixth and last volume of Mr. Hinton's works contains a number of miscellaneous sermons of rather an ordinary character, and some controversial pieces. The author has a theory of his own in connection with the fall of man which has brought down upon him the wrath of two opposite parties, amongst his brethren in Dissent, the hyper-Calvinists on the one hand, and the Arminiana on the other. He holds that the curse in the second chapter of Genesis was superseded by a new dispensation in the third chapter, and that in consequence man became not incapable of pleasing God, but only unwilling to do so. As however this unwillingness can only be overcome by the gift of the Holy Spirit, and the gift of the Holy Spirit is only vouchsafed to the elect according to his theory, there would not seem to be much difference between him and the rigid Calvinists, and one does not see that the human race has much to gain from the controversy which occupies some thirty pages in the volume. Twenty more are devoted to the demolition of the Arminian champion. In dealing with the latter towards the end of this dreary logomachy, the author states, in reference to the relations between God and man, that "neither the whole nor the highest end of God in His ways is the well-being of creatures, but the manifestation of His own glory." This seems to be the keystone of his theology, and pervades all similar systems, that the Divine Being is to be regarded, not as a righteous and loving Father, in whom all our ideas of wisdom and goodness culminate, but as an Oriental prince, who receives the same adoration from his subjects, whether he is a just and sagacious ruler, or a malignant tyrant who dispenses nothing but misery and destruction.