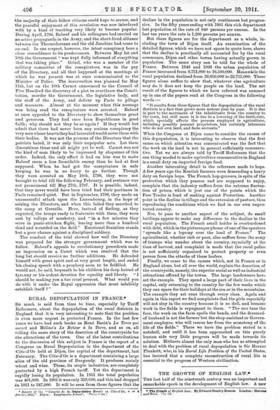 .S0 much is said from time to time, especially by Tariff Reformers, about the depopulation of the rural districts in _England that it is very interesting to note that the problem is even more urgent in protected France. In the last few Tears we have bad such books as Rene Bazin's La Terre qui aneurt and Meline's Le Retour a /a Terre, and so on, all telling the same story of the desertion of the countryside for 4he attractions of the town. One of the latest contributions to the discussion of this subject in France is the report of a ,Congress on Rural Depopulation in the department of the -C6te-d'Or held at Dijon, the capital of the department, last February. The COte-d'Or is a department containing a large .slice of the old province of Burgundy. It produces mainly -wheat and wine. These, its staple industries, are completely ,protected by a high French tariff. Yet the department is rapidly losing its population. In 1851 the total population was 401,000. In 1901 it war only 359,000, and this bad dropped in 1911 to 347,000. It will be seen from these figures that the • Report of ., " Conords de la Depopbansulation_ Hee:freemen CoteM'Or. "I fierier, 1911." Dijon Imprimerie Jo . Price 5 j

decline in the population is not only continuous but progres- sive. In the fifty years ending with 1901 this rich department

But these figures are for the department as a whole, in- cluding the town of Dijon itself. An examination of the detailed figures, which we have not space to quote here, shows that the decline is practically all accounted for by the rural communes, Dijon and other towns having actually grown in population. The same story can be told for the whole of France. Between 1846 and 1906 the urban population of France increased from 8,751,000 to 16,500,000. Meanwhile the rural population declined from 26,650,000 to 22,715,000. These figures alone suffice to show that, whatever else agriculture may do, it does not keep the people on the land. The net result of the figures to which we have referred was summed up in one of the papers read at the Congress in the following words :— _ "It results from these figures that the depopulation of the rural

districts is a fact that grows more serious year by year. It is due in part to the movement of the inhabitants from the country to the town, but still more is it due to a lowering of the birth-rate, which specially affects the persons employed in agriculture, including possibly peasant proprietors, but certainly labourers who do not own land, and farm servants."

When the Congress at Dijon came to consider the causes of this depopulation, it is interesting to observe that the first cause on which attention was concentrated was the fact that the work on the land is not in general sufficiently remunera- tive. Yet we are always told by Tariff Reformers that the

one thing needed to 'make agriculture remunerative in England is a small duty on imported foreign food.

Another interesting detail is the reference made to hops. A few years ago the Kentish farmers were demanding a heavy duty on foreign bops. The French hop-growers, in spite of the protection which they possess and are supposed to enjoy, complain that the industry suffers from the extreme fluctua- tion of prices, which is just one of the points which the Free Trader is fond of making against Protection. Another point is the decline in tillage and the extension of pasture, thus reproducing the conditions which we find in our own unpro, tected country.

Nor, to pass to another aspect of the subject, do small holdings appear to make any difference to the decline in the rural population. The French small holder is overburdened with debt, which in the picturesque phrase of one of the speakers " spreads like a leprosy over the land of France." The agriculturist, whether rich or poor, also suffers from the arniy of tramps who wander about the country, especially at the time of harvest, and complaint is made that the rural police is not sufficiently organized to protect property or even person from the attacks of these loafers.

Finally, we come to the causes which, not in France or in England alone, but all over the world, explain the desertion of the countryside, namely, the superior social as well as industrial attractions offered by the towns. The large landowners have set the example. They spend a large part of their lives in the capital, only returning to the country for the few weeks which they can spare for their holidays at the sea or in the mountains.

The example they set runs through every class. Again 'and again in this report we find complaints that the girls especially will not stay in the country because it is so dull, and because work in the fields is repugnant to them. " The sun tans the face, the work on the farm spoils the hands, and the dreamed- of husband is not the farmer but the shop-assistant or Govern- ment employee, who will rescue her from 'the monotony of the life of the fields." There we have the problem stated in a nutshell, and until it has been approached on this purely

human side very little progress will be made towards its solution. Hitherto almost the only man who has so attempted to deal with the problem of rural depopulation is Sir Horace Plunkett, who, in his Rural Life Problem of the United States,

has insisted that a complete reconstruction of rural life is essential to the progress of Western civilization.