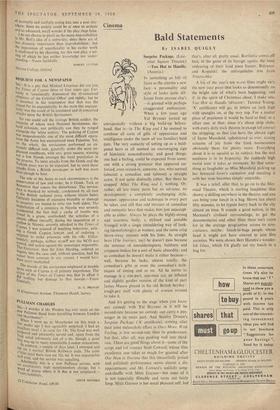 By ISABEL QUIGLY Surprise Package. (Leic- ester Square Theatre.) —Too Hot to Handle. (Astoria.) IN something as full of faces as the cinema a new face—a personality and style of looks quite dif- ferent from anyone else's —is greeted with perhaps exaggerated enthusiasm. When a few years ago Yul Brynner turned up

unexpectedly ilhOUt a big build-up before- hand, that is in The King and I he seemed to combine all sorts of gifts of appearance and intelligence under the (now all too familiar) bald pate. The very audacity of setting up as a bald-, pated hero at all seemed an encouraging sign of histrionic nonconformity, and good things, one had a feeling, could be expected from some- one with a strong presence that appeared un- forced, even reined-in, someone, too, who seemed (almost) a comedian and (almost) a straight actor, if not quite distinctly either. But there he stopped. After The King and I, nothing. Or, rather, all too many parts but no advance, no development; a completely unchanging style, manner, appearance and technique in every part he takes, and still that odd mixture of comedian and romantic hero that makes him just unaccept- able as either. Always he plays the highly-strung and eccentric bully, a stylised and amiable Svengali with a single smouldering way of look- ing (demolishingly) at women, and the same crisp throw-away manner with his lines. As straight hero (The Journey, say) he doesn't pass because the mixture of smoulderingness, baldness and crispness makes for a sort of basic absurdity; and as comedian he doesn't make it either because— well, because he lacks, almost totally, the comedian's gifts or even the comedian's tech- niques of timing and so on. All he seems to manage is a one-part, one-man act, an inflated and slightly goofier version of the kind of part James Mason played in his old British heyday : tough-guy stuff with plenty of women around to take it.

And it's getting to the stage when you know any comedy with Yul Brynner in it will be second-rate because no comedy can carry a pas- senger in its main part. And Stanley Donen's Surprise Package ('A' certificate), coming after their joint melancholy effort in Once More, With Feeling, is less second-rate than its predecessor, but that, after all, was pushing well into third- rate. There are good things about it—some of the script and (of course) Noel Coward, whose film

excellence one takes so' much for granted after Our Man in Havana that this (beautifully poised and polished) performance seems almost a dis- appointment; and Mr. Coward's unlikely song- and-shutTle with Mitzi Gaynor—but most of it is not 'especially filmable and turns out fairly limp. Mitzi Gaynor is her usual pleasant self, but that's, after all, pretty usual. Ruritania comes off best, in the guise of its foreign agents, the most endearing of their kind since lranov, Bulyanov and .Kopalski. the unforgettable trio from Ninorschira.

A list of the year's ten worst films might vary the new year piece that looks so determinedly on the bright side of what's been happening; and if, in the spirit of Christmas cheer, I make one, Too Hot to Handle (director: Terence Young; 'X' certificate) will go, in letters an inch high with spangles on. at the very top. For a nastier piece of prurience it would be hard to find, or a sillier one, at that; since it's about strip clubs. with every dirty trick thrown in except (of course) the stripping; so that you have the absurd sight of Jayne Mansfield, upholstered as ever, raising screams of joy from the tired businessmen obviously there for plenty more. Everything about it is as squalid as its subject, but the real nastiness is in its hypocrisy, the suddenly high moral tone it takes at moments. So that some- thing as laughable as Miss Mansfield picking up her betrayed lover's carnation and nuzzling it with her nose becomes simply sneerable.

It was a relief, after that, to go on to the Mer- maid Theatre, which is starting lunchtime film shows: a shilling anywhere in the theatre, and you can bring your lunch in a bag. Shows last about fifty minutes, to let typists hurry back to the city almost on'time. It sounds a good notion, in the Mermaid's civilised surroundings, to get the documentaries and other filmS there isn't room for in the average programme across to non- cindastes, maybe: lunch-in-bags people whose head it might not have entered to join film societies. We were shown Bert Hanstra's wonder- ful Glass; which I'd gladly eat my lunch in a bag for. •