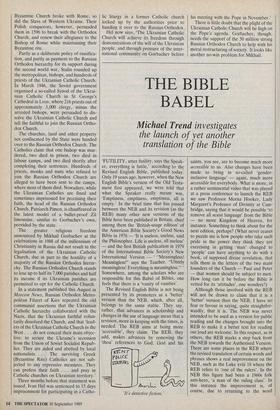 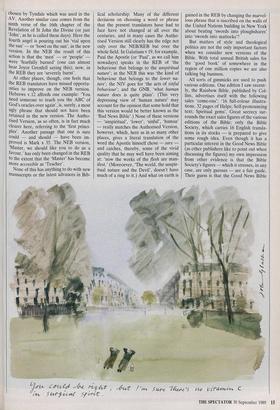 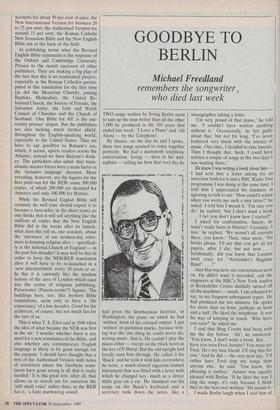 Michael Trend investigates the launch of yet another translation of the Bible `FUTILITY, utter futility, says the Speak- er, everything is futile,' according to the Revised English Bible, published today. Only 19 years ago, however, when the New English Bible's version of the Old Testa- ment first appeared, we were told that what the Speaker really meant was, `Emptiness, emptiness, emptiness, all is empty.' In the brief time that has passed between the NEB and its revision (as the REB) many other new versions of the Bible have been published in Britain, chief among them the 'British-usage edition' of the American Bible Society's Good News Bible in 1976 — 'It is useless, useless, said the Philosopher. Life is useless, all useless' — and the first British publication in 1979 of the International Bible Society's New International Version — ` "Meaningless! Meaningless!" says the Teacher. "Utterly meaningless! Everything is meaningless." ' Somewhere, among the scholars who are responsible for this Babel of Bibles, one feels that there is a `vanity of vanities'.

The Revised English Bible is not being presented by its promoters as a 'better' version than the NEB, which, after all, belongs to the same stable. They say, rather, that advances in scholarship and changes in the use of language mean that a revision, more in keeping with the times, is needed. The REB aims at being more `accessible', they claim. The REB, they add, makes advances by removing the `thou' references to God. God and his `It's detective fiction.' saints, you see, are to become much more accessible to us. Also changes have been made to bring in so-called `gender- inclusive language' — again, much more accessible for everybody. What is more, in a rather sentimental video that was played at a press conference to launch the REB we saw Professor Morna Hooker, Lady Margaret's Professor of Divinity at Cam- bridge, saying that it would be possible `to remove all sexist language' from the Bible — no more Kingdom of Heaven, for instance. Something to think about for the next edition, perhaps? (What never ceases to puzzle me is how people who take such pride in the power they think they are exercising in getting `man' changed to `people' can have anything to do with a book, of supposed divine revelation, that tells them in the letters of the two main founders of the Church — Paul and Peter — that women should be subject to men. How long can it be before the Bible is vetted for its 'attitudes', one wonders?) Although those involved with the REB will not be drawn to claim that it is a `better' version than the NEB, I have no fear or favour in saying, quite straightfor- wardly, that it is. The NEB was never intended to be used as a version for public reading and the changes brought into the REB to make it a better text for reading out loud are welcome. In this respect, as in others, the REB marks a step back from the NEB towards the Authorised Version. There are some places in the REB where the revised translation of certain words and phrases shows a real improvement on the NEB, such as the Luke xviii 18 where the REB refers to 'one of the rulers'. In the NEB this figure had been a 1960s folk anti-hero, 'a man of the ruling class'. In this instance the improvement is, of course, due to returning to the word chosen by Tyndale which was used in the AV. Another similar case comes from the ninth verse of the 16th chapter of the Revelation of St John the Divine (or just `John', as he is called these days). Here the fourth angel is pouring out his 'vial upon the sun' — or 'bowl on the sun', in the new version. In the NEB the result of this action is that the 'men' — or 'people' were 'fearfully burned' (one can almost hear Joyce Grenfell saying this); now, in the REB they are 'severely burnt'.

At other places, though, one feels that the REB translators have missed opportu- nities to improve on the NEB version. Hebrews v.12 affords one example: 'You need someone to teach you the ABC of God's oracles over again', is, surely, a most ugly phrase that should not have been retained in the new version. The Autho- rised Version, as so often, is in fact much clearer here, referring to the 'first princi- ples'. Another passage that one is sure could — and should — have been im- proved is Mark x 35. The NEB version, `Master, we should like you to do us a favour,' has only been changed in the REB to the extent that the 'Master' has become more accessible as 'Teacher'.

None of this has anything to do with new manuscripts or the latest advances in Bib- heal scholarship. Many of the different decisions on choosing a word or phrase that the present translators have had to face have not changed at all over the centuries, and in many cases the Autho- rised Version still clearly has the edge not only over the NEB/REB but over the whole field. In Galatians v 19, for example, Paul the Apostle (or 'Paul', as we call him nowadays) speaks in the REB of 'the behaviour that belongs to the unspiritual nature'; in the NEB this was 'the kind of behaviour that belongs to the lower na- ture'; the NIV goes for 'the acts of sinful behaviour'; and the GNB, 'what human nature does is quite plain'. (This very depressing view of 'human nature' may account for the opinion that some hold that this version would be better known as the `Bad News Bible'.) None of these versions — 'unspiritual', 'lower', 'sinful', 'human' — really matches the Authorised Version, however, which, here as in so many other places, gives a literal translation of the word the Apostle himself chose — sarx and catches, thereby, some of the vivid quality that he may well have been aiming at: 'now the works of the flesh are man- ifest.' (Moreoever, The world, the unspir- itual nature and the Devil', doesn't have much of a ring to it.) And what on earth is gained in the REB by changing the marvel- lous phrase that is inscribed on the walls of the United Nations building in New York about beating 'swords into ploughshares' into 'swords into mattocks'?

But matters of style and theological politics are not the only important factors when we consider new versions of the Bible. With total annual British sales for the 'good book' of somewhere in the region of one million copies we are also talking big business.

All sorts of gimmicks are used to push various editions. One edition I saw recent- ly, the Rainbow Bible, published by Col- lins, advertises itself with the following sales 'come-ons': '16 full-colour illustra- tions, 32 pages of Helps; Self-pronouncing text; Spiritual gems'. Great secrecy sur- rounds the exact sales figures of the various editions of the Bible; only the Bible Society, which carries 16 English transla- tions in its stocks — is prepared to give some rough idea. Even though it has a particular interest in the Good News Bible (as other publishers like to point out when discussing the figures) my own impression from other evidence is that the Bible Society's figures — which it stresses, in any case, are only guesses — are a fair guide. Their guess is that the Good News Bible accounts for about 30 per cent of sales; the New International Version for between 20 to 25 per cent; the Authorised Version for around 15 per cent; the Roman Catholic New Jerusalem Bible and the New English Bible are at the back of the field.

In publishing terms what the Revised English Bible represents is the response of the Oxford and Cambridge University Presses to the recent successes of other publishers. They are making a big play of the fact that this is an ecumenical project, especially as the Roman Catholics partici- pated in this translation for the first time (as did the Moravian Church), joining Baptists, Methodists, the United Re- formed Church, the Society of Friends, the Salvation Army, the Irish and Welsh Council of Churches and the Church of Scotland. 'One Bible for All' is the uni- versity presses' slogan. But the publishers are also looking much further afield, throughout the English-speaking world, especially to the United States. Thus we have to say goodbye to Balaam's ass, which, it seems, upsets readers across the Atlantic; instead we have Balaam's donk- ey. The publishers also admit that trans- atlantic market forces were a main factor in the 'inclusive language' decision. More revealing, however, are the figures for the first print-run for the REB: some 300,000 copies, of which 200,000 are destined for America and only 100,000 for Britain.

While the Revised English Bible will certainly do well (one should expect it to become a best-seller in the short term) no one thinks that it will sell anything like the millions of copies that the New English Bible did in the weeks after its launch; what does this tell us, one wonders, about the 'successes' of our modern-day refor- mers in keeping religion alive — specifical- ly in the national Church of England — in the past few decades? It may well be that in order to keep the NEB/REB translation alive it will have to be re-launched in a 'new interpretation' every 20 years or so. In this it is curiously like the modern history of the area of London which once was the centre of religious publishing, Paternoster (Parens-noster?) Square. The buildings here, too, like modern Bible translations, seem only to have a 'life expectancy' of a few decades. Good for the architects, of course; but not much fun for the rest of us.

This is what T. S. Eliot said in 1948 when the idea of what became the NEB was first in the air: 'I wonder whether there is any need for a new translation of the Bible, and also whether any contemporary English language is likely to be good enough for the purpose. I should have thought that a text of the Authorised Version with notes of correction where the Jacobean trans- lators have gone wrong is all that is really needed.' It is this great text, after all, that allows us to search out for ourselves the 'still small voice' rather than, as the REB has it, 'a faint murmuring sound'.