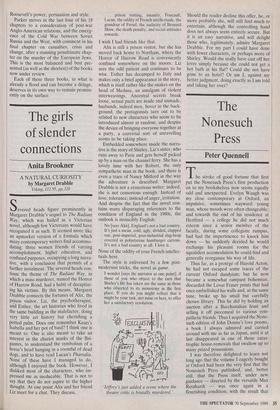 The girls of slender connections

A NATURAL CURIOSITY by Margaret Drabble

Severed heads figure prominently in Margaret Drabble's sequel to The Radiant Way, which was hailed as a Victorian novel, although few Victorians would have recognised it as such. It seemed more like an upmarket version of a formula which many contemporary writers find accommo- dating: three women friends of varying accomplishment, higher education, and confused purposes, occupying a long narra- tive, with a conclusion that permits of a further instalment. The severed heads con- tinue the theme of The Radiant Way, in which a mass murderer, named the Horror of Harrow Road, had a habit of decapitat- ing his victims. By this means, Margaret Drabble connects the fortunes of Alix, the prison visitor, Liz, the psychotherapist, and Esther, the art historian who lived in the same building as the malefactor, doing very little art history but cherishing a potted palm. Does one remember Keats's Isabella and her pot of basil? I think one is meant to. One is also meant to take an interest in the chariot masks of the Bri- gantes, to understand the symbolism of a horse's head hanging in a roomful of dead dogs, and to have read Lucan's Pharsalia. None of these have I managed to do, although I enjoyed the book. However, I disliked most of the characters, who im- pressed me as ineducable. That is not to say that they do not aspire to the higher thought. At one point Alix and her friend Liz meet for a chat. They discuss, . . . prison visiting, insanity, Foucault, Lacan, the oddity of French intellectuals, the grandeur of Freud, the audacity of Bernard Shaw, the death penalty, and social attitudes towards.

Alix is still a prison visitor, but she has moved back home to Northam, where the Horror of Harrow Road is conveniently confined somewhere on the moors. Liz sees the odd patient and continues to be wise. Esther has decamped to Italy and makes only a brief appearance in the story, which is itself rather like the snakes on the head of Medusa, an amalgam of violent interweavings. Ancestral secrets break loose, sexual pacts are made and unmade, husbands, indeed men, hover in the back- ground, the protagonists turn out to be related to new characters who seem to be introduced almost at random, and despite the device of bringing everyone together at a party, a convivial sort of unravelling seems to be taking place.

Embedded somewhere inside the narra- tive is the story of Shirley, Liz's sister, who runs away to Paris and gets herself picked up by a man on the channel ferry. She has a lovely time with her Robert, the only sympathetic man in the book, and there is even a trace of Nancy Mitford in the way the adventure is described. Margaret Drabble is not a censorious writer: indeed, she is not censorious enough. Instead of love, tolerance; instead of anger,, irritation. And despite the fact that the novel con- tains many disparaging references to the condition of England in the 1980s, the outlook is invincibly English:

None of the oddity of your French intellec- tuals here.

The style is enlivened by a few post- modernist tricks, the novel as game.

I wonder [says the narrator at one point], if those of you who object to the turn that Shirley's life has taken are the same as those who objected to its monotony in the first place. If you do you might reflect that it might be your task, not mine or hers, to offer her a satisfactory resolution.

'Jeffrey's just added a scene where the theatre critic is brutally murdered.' Should the reader decline this offer, he, or more probably she, will still find much to entertain, although the controlling hand does not always seem entirely secure. But it is an easy narrative, and will delight those who, legitimately, admire Margaret Drabble. For my part I could have done with fewer characters, or perhaps more of Shirley. Would she really have cast off her lover simply because she could not get a hot bath in his flat? Could she not have gone to an hotel? Or am I, against my better judgment, doing exactly as I am told and taking her over?