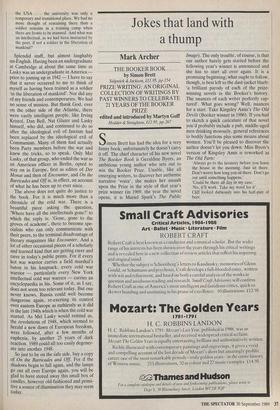 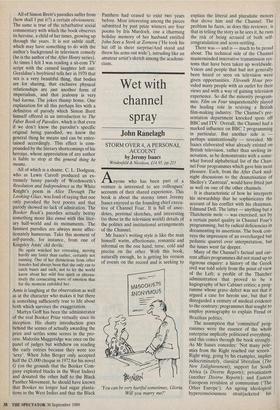 Jokes that land with a thump

THE BOOKER BOOK by Simon Brett

PRIZE WRITING: AN ORIGINAL COLLECTION OF WRITINGS BY PAST WINNERS TO CELEBRATE 21 YEARS OF THE BOOKER PRIZE edited and introduced by Martyn Goff

Simon Brett has had the idea for a very funny book; unfortunately he doesn't carry it off. The chief character of his new novel The Booker Book is Geraldine Byers, an ambitious young author who sets out to win the Booker Prize. Unable, like all emerging writers, to discover her authentic narrative 'voice', she makes her assault upon the Prize in the style of that year's prize winner (in 1969, the year the novel opens, it is Muriel Spark's The Public Image). The only trouble, of course, is that our author barely gets started before the following year's winner is announced and she has to start all over again. It is a promising beginning; what ought to follow, though, is best left to the dust-jacket blurb: 'a brilliant parody of each of the prize- winning novels in the Booker's history. The nuances of each writer perfectly cap- tured'. What goes wrong? Well, nuances for a start. Take Kingsley Amis's The Old Devils (Booker winner in 1986). If you had to sketch a quick caricature of that novel you'd probably include a pub, middle-aged men drinking morosely, general references to bodily functions plus some moans about women. You'll be pleased to discover the author doesn't let you down. Miss Byers's version of Kingsley Amis is reworked as The Old Farts:

'Could be there all day in my case.'

Cliff looked dubiously into his half-pint of beer.

All of Simon Brett's parodies suffer from (how shall I put it?) a certain obviousness. The same is true of the rebarbative social commentary with which the book observes its heroine, a child of her times, growing up through the years. It is not subtle stuff, which may have something to do with the author's background in television comedy (he is the author of the After Henry series).

At times I felt I was reading a sit-corn TV script with the canned laughter left out: Geraldine's boyfriend tells her in 1970 that sex is a very beautiful thing, that bodies are for sharing, that exclusive physical relationships are just another form of imperialism, and that jealousy is very bad karma. The jokes thump home. One explanation for all this perhaps lies with a definition of parody which Simon Brett himself offered in an introduction to The Faber Book of Parodies, which is that even if we don't know the parodist's specific original being parodied, we know the general thing he means and can be enter- tained accordingly. This effect is com- pounded by the literary shortcomings of his heroine, whose appreciation of any author is liable to stop at the general thing he means.

All of which is a shame. C. L. Dodgson, who as Lewis Carroll produced an ex- tremely funny parody of Wordsworth's Resolution and Independence as the White Knight's poem in Alice Through The Looking-Glass, was fond of saying that one only parodied the best poems and that parody showed no lack of admiration. The Booker Book's parodies actually betray something more like ennui with this liter- ary half-world and its monuments. The funniest parodies are always more affec- tionately humorous. Take this moment of self-parody, for instance, from one of Kingsley Amis' old devils:

He again watched her retreating, moving hardly any faster than earlier, certainly not running. One of her distinctions from other females had always been that she only ran to catch buses and such, not to let the world know about her wild free spirit or alterna- tively the coruscating wave of emotion that for the moment enfolded her.

Amis is laughing at the observation as well as at the character who makes it but there is something sufficiently true to life about both which survives the exaggeration.

Martyn Goff has been the administrator of the real Booker Prize virtually since its inception. His chatty introduction goes behind the scenes of actually awarding the prize and settles some scores in the pro- cess. Malcolm Muggeridge was once on the panel of judges but withdrew on reading the early entries because they were too 'sexy'. When John Berger only accepted half the £5,000 cheque in 1972 for his novel G (on the grounds that the Booker Com- pany exploited blacks in the West Indies) and donated the other half to the Black Panther Movement, he should have known that Booker no longer had sugar planta- tions in the West Indies and that the Black Panthers had ceased to exist two years before. Most interesting among the pieces submitted by past prize winners are four poems by Iris Murdoch, one a charming holiday memory of her husband entitled John Sees a Stork at Zomora ('He took his hat off in sheer surprise/And stood and threw his arms out wide'), intruding like an amateur artist's sketch among the academi- cians.