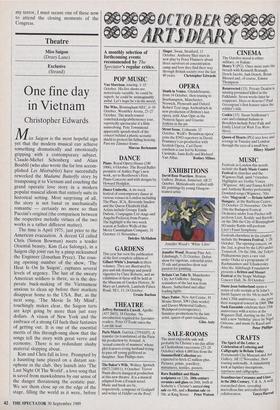 Page 42, 30 September 1989 — A monthly selection of forthcoming events recommended by The Spectator's
Close

Van Morrison, touring, 1-15 October. His live shows are notoriously variable: he could be superb, he could be unimaginably awful. Let's hope he's in the mood.

The Who, Birmingham NEC, 6-10 October, Wembley Arena, 23-27 October. The much touted comebackandgrabthemoney tour, reportedly spectacular if a little uninvolving. Pete Townshend apparently spends much of the concert behind a plastic acoustic shield to protect his failing hearing. Pass my Zimmer-frame. . . .

Dance Umbrella, A six-week festival of contemporary dance at various venues in London including The Place, ICA, Riverside Studios and the Queen Elizabeth Hall. Artists include Groupe Emile Dubois, Compagnie Cre-Ange and Angelin Prcljocaj from France. The highlight is the two-week season at Sadlers Wells of the Mcrcc Cunningham Company, 31 October-11 November.

This year has seen the publication of the first complete edition of Gilbert White's Journals in three volumes. They are illustrated by pen-and-ink drawings and pencil vignettes by Clare Roberts, and an exhibition of these will be held at the Museum of Garden History, St Mary-at-Lambeth, Lambeth Palace Road, SEI, 11-24 October.

Paris Match, Garrick (379 6107). A transfer (in translation) of the Paris hit production by Arnaud. A `sexual comedy of manners whose plot features erring husband trying to pass off young girlfriend as daughter. Sian Phillips stars.

The Baker's Wife, Wolsey, Ipswich (0473 218911), 9 October. Trevor Nunn directs inaugural production at this new theatre. It is a musical adapted from a French novel. Music and book are by, respectively, composer of Godspell and writer of Fiddler on the Roof.

Singer, Swan, Stratford, 11 October. Anthony Sher stars in new play by Peter Flannery about three survivors of concentration camp and how they find their way through British society over the last 40 years. Christopher Edwards

Death in Venice, Glyndebourne, from 14 October, then touring to Southampton, Manchester, Norwich, Plymouth and Oxford. Robert Tear sings Aschenbach in new production of Britten's last opera, with Alan Opie as the Nemesis figure and Graeme Jenkins in the pit.

Britain Can Take It, Manchester City Art Galleries. Stirring reminders of the last war from Moore, Sutherland and other leading lights.

The most enjoyable sale will probably be Christie's six-day affair at Cheltenham racecourse (23-28 October) when 4,000 lots from the Summerfield Collection are expected to fetch £2 million-plus. Pictures, prints, jewellery, miniatures, textiles, posters.

Rare Buddhist and Hindu sculptures on 12th, 20th-century ceramics and glass on 26th, both at Sotheby's. Christie's annual ring sale on 4th, and a Russian sale on 5th, at King Street. Peter Watson

The October mood is either military, or Italian: Henry V (PG). Once more unto the breach with Kenneth Branagh, Derek Jacobi, Judi Dench, Brian Blessed and, of course, Emma Thompson.

Cookie (15). Susan Seidleman's cute and criminal Italians in Brooklyn include Peter Falk and Emily Lloyd (of Wish You Were Here).

Queen of Hearts (PG) sees love and revenge in Tuscany and London through the eyes of a small boy. Hilary Mantel

Festivals in London this month include the Early Music Centre Festival in churches and the Wigmore Hall, until 7 October. Highlights are Gothic Voices (Wigmore, 4th) and Emma Kirkby and Anthony Rooley performing Dowland songs (Wigmore, 7th). Also `Magyarok' — Britain Salutes Hungary, at the Barbican Centre, 25 October-21 November. On the 25th the Budapest Festival Orchestra under Ivan Fischer will perform Liszt, Kodaly and Bartok; on the 28th the City of Birmingham SO under Rattle will perform Liszt's Faust Symphony.

Festivals elsewhere in the country include the Swansea Festival, 1-28 October, The opening concert, on the 2nd, is given by the LPO under Tennstedt. On the 20th, the Tokyo Philharmonic pays a rare visit under Otaka in a programme of Rachmaninov and Tchaikovsky. Also the Aldeburgh Foundation presents a Britten and Mozart Festival at the Snape Maltings

Dame Joan Sutherland opens a series of solo recitals at St John's Smith Square on the 5th to mark St John's 20th anniversary — she gave their inaugural concert in 1969. The Nash Ensemble celebrate their 25th anniversary with a series at the Wigmore Hall, starting on the 21st with a new `birthday' piece by Nigel Osborne, and music by Ravel and Poulenc. Peter Phillips

The Spirit of the Letter: a Celebration of Lettering and Calligraphy in Britain Today, Portsmouth City Museum and Art Gallery, till 12 November, then touring nationally. A stimulating look at lapidary inscriptions, typefaces and calligraphy.