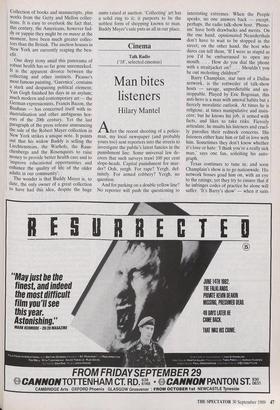 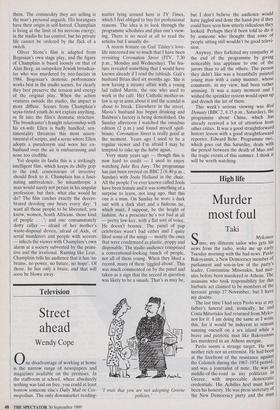 After the recent shooting of a police- man, my local newspaper (and probably yours too) sent reporters into the streets to investigate the public's latest fancies in the punishment line. Some universal law de- crees that such surveys trawl 100 per cent slope-heads. Capital punishment for mur- der? Ooh, yergh. For rape? Yergh, def- initely. For armed robbery? Yergh, no question.

And for parking on a double yellow line? No reporter will push the questioning to interesting extremes. When the People speaks, no one answers back — except, perhaps, the radio talk-show host. 'Phone- ins' have both drawbacks and merits. On the one hand, opinionated Neanderthals don't have to wait to be stopped in the street; on the other hand, the host who dares can tell them, `If 1 were as stupid as you I'd be embarrassed to open my mouth. . . . How do you dial the phone with a straitjacket on? . . . Shouldn't you be out molesting children?'

Barry Champlain, star turn of a Dallas network, is the rottweiler of talk-show hosts — savage, unpredictable and un- stoppable. Played by Eric Bogosian, this anti-hero is a man with amoral habits but a fiercely moralistic outlook. At times he is religiose, at times manipulative and insin- cere; but he knows his job, is armed with facts, and likes to take risks. Fiercely articulate, he insults his listeners and cruel- ly parodies their redneck concerns. His listeners either hate him or fall in love with him. Sometimes they don't know whether it's love or hate: 'I think you're a really sick man,' says one fan, soliciting his auto- graph.

Texas continues to tune in; and soon Champlain's show is to go nationwide. His network bosses goad him on, with an eye to the ratings; yet they try to ensure that if he infringes codes of practice he alone will suffer. 'It's Barry's show' — when it suits them. The commodity they are selling is the man's personal anguish. His harangues have their origin in self-hatred. Champlain is living at the limit of his nervous energy; in the studio he has control, but his private life cannot be ordered by the flick of a switch.

Oliver Stone's film is adapted from Bogosian's own stage play, and the figure of Champlain is based loosely on that of Alan Berg, an outspoken Jewish broadcas- ter who was murdered by neo-fascists in 1984. Bogosian's demonic performance works best in the studio scenes, for clearly they best preserve the tension and energy of the original play. When the action ventures outside the studio, the impact is more diffuse. Scenes from Champlain's sepia-tinted youth do not explain anything, or fit into the film's dramatic structure. The broadcaster's fraught relationship with his ex-wife Ellen is badly handled; sen- timentality threatens this most unsen- timental of scripts, and a scene where Ellen adopts a pseudonym and woos her ex- husband over the air is embarrassing and none too credible.

Yet despite its faults this is a strikingly. intelligent film, which keeps its chilly grip to the end; connoisseurs of invective should flock to it. Champlain has a fasci- nating ambivalence. So misanthropic a man would surely not persist in his singular profession; but then, what else would he do? The film catches exactly the decere- brated drooling one hears every day: 'I want all those people to be liberated, you know, women, South Africans, those kind of people . . .'; and one consummately dotty caller — afraid of her mother's waste-disposal device, afraid of Aids, of serial murderers and people with accents — infects the viewer with Champlain's own alarm at a society subverted by the primi- tive and the irrational. Ranting like Lear, Champlain tells his audience that it has `no brains, no power, no future, no hope'. Of those, he has only a brain; and that will soon be blown away.